You are here: Home / Basics / What is a Bypass Capacitor : Types, Functions & Its Applications

A capacitor is a device that can be used to store electric energy. It has two terminals and its effect is called capacitance. A capacitor basically consists of two metal plates that act as a conductor with a dielectric medium in between. The conductor may be in the form of electrodes or metal plates or thin foil. The dielectric material is used to increase the capacitance. There are different types of capacitors and a bypass capacitor is one of them. It is a component in an electric circuit that is placed between the power supply VCC and the ground GND in the circuit. It can be used to reduce the power supply noise. It can also be used to provide current supply to the integrated circuits that require a large supply of current.

What is a Bypass Capacitor? 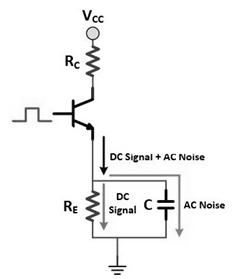 Here in the diagram, we can see that the capacitor conducts AC and the AC is regularly removed from an AC/DC combination. After that, the DC can freely pass through the bypassed components.

There are different types of bypass capacitors which include the following. 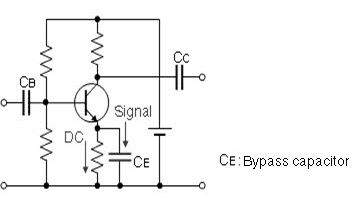 In the case of a cathode type, the cathode resistor which is present in a triode preamp is bypassed within a very large capacitor. This eliminates the negative feedback. This is also called cathode degeneration which can greatly increase the voltage gain. 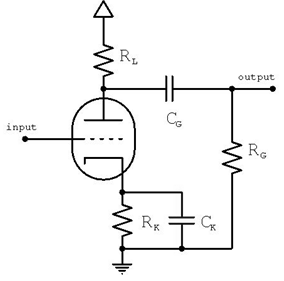 Some of the important characteristics of the bypass capacitor which makes it an important electric component have been mentioned below:

Applications of a bypass capacitor

A bypass capacitor can be used for the following purposes:

The bypass capacitor should be kept close to the integrated circuits which require a very large amount of current. The capacitor should have very low inductance and series resistance which is functional only at higher frequencies.

1). What is the difference between the bypass capacitor and the coupling capacitor?

Coupling capacitors are basically used to decouple the dc and when ac signals are given as input to the circuit. They make sure that the quiescent points of the circuit are not disturbed. On the other hand, the bypass capacitor removes the ac ripples from the dc signal thereby providing a very low impedance path.

2). What is an electronic bypass?

An electronic bypass refers to the process of providing an alternate path to the flow of electric current in a circuit. In this capacitor, the ac signals are bypassed.

3). What will happen if the bypass capacitor is removed?

If we remove the bypass capacitor from our circuit, an extreme degeneration will be produced in the circuit as a result of which the voltage gain in the amplifier circuit will also be reduced.

4). What is the effect of the bypass capacitor?

The most important effect of a bypass capacitor is that it can be used to remove power supply noise. It is also used to produce clean DC signals by removing AC ripples from it. The bypass capacitor is placed between the VCC and the GND in the electric circuit.

5). How do find the value of bypasscapacitor ?

The value of the bypasscapacitor can be calculated using the formula

C = 1/(2PiFXc) where Pi =3.14, F= frequency of the electical signal which is generally various per country and Xc is the reactance.  When a bypass capacitor is connected across a resistor then the reactance would be 1/10 of the resistor. i.e. Xc = resistance/10.

Please refer to this link to know more about Filter Capacitor.