You are here: Home / Electronics / What is Touch Sensor : Working & Its Applications

Even if a human body touches something, instantly the surface information will be passed to the brain using senses. Touch can also be felt by animals and plants. Hence the same technique can also be implied in today’s electronics. Electronic devices consist of various sensors like temperature, pressure, humidity, etc. Similarly, a sensor-related touch device is also designed. Nowadays, we are coming across user interfaces that are operated on a single touch.  There is a wide range of applications that uses this sensing criterion. Examples in which the touch sensor is used are mobile phones, monitor screens, control panels, etc.

What is a Touch Sensor?

Definition: A sensor that is capable enough of capturing and recording the physical touch made by the operator can be defined as a touch sensor. Further, it is also referred to as a touch detector. 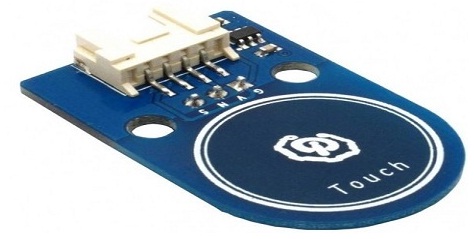 Other than touch, it can capture a certain extent of proximity without direct interaction or physical contact. The touch sensor used in applications will reduce the overall manufacturing cost. For example, in computers, the usage of touch sensors eliminates mechanical objects like mice and a keyboard. Even the final product looks appealing in terms of design and outlook.

These sensors are sensitive to any pressure or force applied or touch. The principle of touch is similar to that of a switch. When the switch is closed, the current flows otherwise there is no chance of the current to flow. Similarly, when the touch sensor senses the touch or proximity is captured then it acts like a closed switch otherwise it acts as an open switch.  These sensors are also known as ‘Tactile Sensors’.

The touch sensors are classified into two types. They are

These are some of the most popular types among touch sensors. As the name suggests, capacitive touch sensors resemble similar to a capacitor. The capacitance of this sensor can be expressed by the formula.

‘A’ = Area of the parallel plates

‘d’= Distance among the plates that are parallel to each other

From the above formula for the capacitive touch sensor, two conclusions can be derived.

In this sensor, there are two plates with ‘Co’ as the capacitance. When the human touch is identified, the touching part to the sensor is referred to as a conducting object and the capacitance is denoted as CT. The ‘Co’ is monitored continuously by using measuring equipment as the change in the capacitance is detected, it will be converted in the form of a signal.

The capacitive touch sensors can be easily manufactured with an attractive design and in less investment. Hence these are widely preferred in mobile phones, iPods,  various industrial and automotive applications. In the measurement of distance, pressure, etc. these sensors are used.

The other type of touch sensors includes resistive. It doesn’t get affected due to small touching sense or contact. It needs a certain amount of force to start operating. So, this type of sensor is utilized in the keypads of musical instruments, touchpads that are resistive, etc.

The most common application of touch sensors can be seen in water taps such that with one touch, the flow of running water can be controlled. These sensors are also utilized in home automation using Arduino or Raspberry pi projects.

These are some of the practical applications of touch sensors.

1). What does the touch sensor do?

A touch sensor is designed to function as a switch when a conducting object touches it. Other than touch it can feel the proximity based on which its functionality depends.

2). What does a touch sensor measure?

3). How many types of sensors are there?

There are sensors classified as analog and digital ones. Further, the most frequently used sensors in electronic industries are Temperature sensors, Ultrasonic sensors, IR sensors, Level sensors, Gas sensors, Smoke sensors, and so on.

A switch cannot be a sensor. Both the sensor and the switch are completely two different terms. The purpose of the sensor in the circuit is to sense the information. The sensed information is converted in the form of a signal. This signal is passed on to the controller so that the operation performed by a switch can be controlled.

Please refer to this link for Proximity Sensor.

Please refer to this link for Touchscreen Technology MCQs

Please refer to this link to know more about Raspberry Pi MCQ’s.

However, there is an increase in demand for touch sensors due to the adoption of these touch-enabled displays. This is a wide adaptable sensor in consumer electronics devices. The fast revolutions are taking place in the sensors field. During the year 2018 in the month of March, Huawei started the use of a fingerprint sensing option in the display from Qualcomm. These enhancements provide security to the various applications used. But these sensors are highly sensitive and the values can easily get altered if those are touched accidentally. Some measures during manufacturing must be taken to avoid such conditions. Which sensor you have used recently?