You are here: Home / Electronics / What is a Proximity Sensor : Types & Its Applications

Proximity sensor comprises all sensors that execute non-contact detection as compared to limit switches that notice objects through contacting physically them. These types of sensors change the data into an electrical signal on the movement or occurrence of a target. These sensors are used in mobile phones. Once the target is in a small range, then the lock screen of the mobile user interface will come into view which is called sleep mode. These sensors can be utilized to identify air gestures through the collection of proximity sensing elements.

The main purpose of this sensor is to notice the object without any physical contact with it. The utmost distance detected by this sensor is called a normal range. This kind of sensor produces an electromagnetic field otherwise utilizes IR radiation to generate a light beam. This article discusses an overview of proximity sensors and their working.

What is a Proximity Sensor? 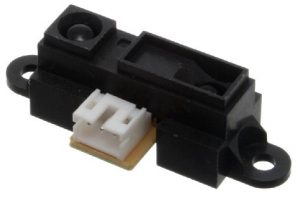 A non-contact sensor like a proximity sensor detects the existence of a target once it enters the field of the sensor. The detection of a target can be done based on the kind of sensor by using light, sound, IR otherwise electromagnetic fields.

These kinds of sensors are utilized in recycling plants, phones, anti-aircraft systems, assembly lines & self-driving cars. There are different kinds of proximity sensors available where each sensor detects targets in dissimilar methods.

These are contactless sensors used for detecting metal objects. This kind of sensor mainly depends on the induction law. Once a metallic object approaches it, then it drives an oscillator through a coil. This sensor includes two versions & includes four essential components which are discussed below.
The versions of inductive proximity sensors are unshielded and shielded

In the shielded version, the generated electromagnetic field is concentrated in the face, where the sensor coil sides are covered up

Here whenever a target is not there, these sensors oscillate continuously and when an object is there then only the switch will trigger. The inductive proximity sensor is mainly used for industrial and security purposes like metal object detection, land mines, automation machine production, etc.

These types of sensors are also contactless, used to notice both the objects like metallic & non-metallic that includes powders, liquid, granular, etc. This sensor works by noticing a change within capacitance.
Likewise to inductive type, it includes an oscillator, switching circuit for output & Schmitt trigger.

The main difference is it includes two charging plates like one internal & one external for capacitance. The connection of these two plates can be done like this; the internal plate is connected to the oscillator whereas the external plate is used as the detecting surface.

This kind of proximity sensor generates an electrostatic field. Once an object reaches the detecting region, then both plate’s capacitance also increases those results in amplitude gain of an oscillator. This gain activates the output switch of the sensor. These sensors oscillate only once the target is present.
The applications of capacitive proximity sensors include Industrial processes, controlling moisture, touch applications, etc

These sensors are one kind of proximity sensor that is utilized in several applications of automation as well as manufacturing. The main purpose of this sensor is to detect objects and measurement of distance. These sensors are used in processing beverages, food & several packaging applications.

The frequency range of these sensors is higher than the audible sound of humans approximately 20 kHz. The basic principle of this sensor is to transmit an ultrasonic signal & gets a signal back. By using the time disparity among these signals, the distance toward the target can be decided.

These sensors use sound instead of light, so they can be utilized wherever these sensors have complexity like detecting plain plastic labels and objects, surfaces with extremely reflective that discard optical sensors. These are also resistant to general contaminants like moisture, ambient light & dust.

Generally, these sensors are cost-effective as compared to inductive & capacitive types. These are applicable in automated systems as they can arrange into small locations. These sensors are also called light beam sensors.

An optical proximity sensor contains a sensor and a light source. A sensor is used to detect the light whereas a light source produces light. The light sensor in this sensor is normally a semiconductor device like a photodiode that produces less light once light energy strikes it.

The magnetic proximity sensor simply detects the magnetic field based on mechanical principles. They detect the presence of a magnetic target which is characterized through its magnetic field. Once it enters the range of the sensor detection, then it activates the switching procedure.

These sensors are mainly used for detecting non-contact locations away from the typical ranges of inductive sensors. The operating principles used by this sensor are GMR inductive, reed switches, magnetoresistive, variable reluctance otherwise Hall Effect sensors.

The features of the proximity sensor include the following.

How to Check Proximity Sensor?

On every phone, the proximity sensor is the main feature but sometimes its role cannot be understated in our devices. This sensor mainly assists gestures & notices our facial features on phones. Some of the most frequently reported sensor problems to include the following that may occur because of Software otherwise Hardware issues.

Verify whether your mobile goes into sleep mode while making calls, the sensor will be immobilized and enters into sleep mode. So in this condition, push the power switch to activate the mobile screen back on. If the error happens in other situations, determine the position of the sensor. This will be changed through the mobile model.

To fix the above issues, here are some solutions.

An infrared proximity sensor is one kind of electronic device used to notice the existence of a target once it comes to a fixed range from this sensor throughout reflected IR rays. Here this circuit is built with a normal operational amplifier like LM358. 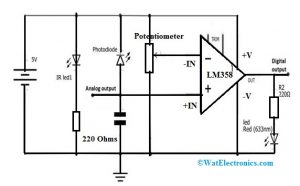 The essential components used to build this circuit are

The working principle of this circuit is quite easy. A typical idea includes two LEDs that are parallel to each other to the target like a photodiode & IR emitting led. Both these act like a pair of transmitter-receiver. Once an obstruction approaches before emitter waves, they are reproduced back & interrupted through the receiver.

According to the photodiode propertied, the interrupted IR waves will reduce the resistance of the photodiode and the resultant electric signal is generated. This signal in practice is the voltage across the 10k resistor which is directly fed to the non-inverting end of the op-amp.

Here in this circuit, the operational amplifier changes the signal from analog form to digital. The output of the sensor can be used in two forms like analog & digital. Analog output values range continuously from zero to finite value. This signal directly cannot be given to the motor drivers as well as other switching devices.

Primarily, they have to be processed through the microcontrollers & changed into digital form using analog to digital converter. This form of output needs an extra microcontroller however removes the use of an operational amplifier.

Please refer to this link to know more about Color Sensor & Gyroscope Sensor.