You are here: Home / Electronics / What is Cascode Amplifier : Circuit & Its Working

Cascode is a technique implied to improve the performance of the analog circuits. The same technique can be applied to transistors and the vacuum tubes to make the circuit better performance-wise.   The word cascode is initiated in the year 1939 by Frederick Vinton Hunt’s and Roger Wayne Hickman’s article during the discussion of voltage stabilizer applications. The discussion was about to propose a method to replace the pentode by cascoding two triodes. In cascoding, two transistors are used either BJTs or FETs such that one configuration acts as an input stage whose output is provided as input to the output collecting configuration. Miller Effect can be isolated by the usage of a cascode amplifier.

What is a Cascode Amplifier?

The characteristics due to the cascoding of amplifiers are:

As there is no direct communication or coupling from output to input because of high isolation leads to eliminate the miller effect. 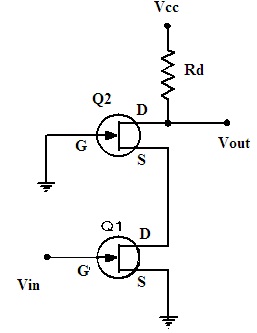 As the voltage at the source and the drain of the first stage FET, Gate, and the source terminals of the second stage FET is almost constant. Hence their nothing to be feedback. These type of conditions leads to isolating the situation called the miller effect.

Advantages and Disadvantages of Cascode Amplifier

The advantages of the cascode amplifier are:

The disadvantages of these amplifiers are:

The applications of these amplifiers  are:

1). What does cascode mean?

2). What is the difference between cascade and cascode?

The cascade connection is about the series oriented connection between the transistors. In the two-stage amplification, the output of the first stage is provided as input to the second stage, and further for n-stages, this chain continues.

3). Why do we use a cascode amplifier?

To achieve high impedances, bandwidth, overall gain, and above all to protect the amplification from the miller affect these amplifiers are used.

4). What do you mean by feedback in the amplifier?

The process in which the output generated is fed back to the input is known as feedback. This process is popular in amplifiers to make its operation stable, as well as noise, which can be reduced from the system.

5). What is Miller voltage?

When the voltage amid gate an the drain terminal comes closer to the value zero where there is a chance of transition to be at its peak. In this situation, the miller effect occurs and this type of voltage is referred to as miller voltage.

Please refer to this link for cascode amplifier MCQs

However, cascode amplifiers are further classified into two types. They are folded and bimos cascode amplifiers. Based on the requirement of gain, bandwidth and the impedance criteria the type of it is chosen for applications. Can you describe how gain and the bandwidth are related to these amplifiers?