You are here: Home / Electronics / Types of Resistors & Their Applications

A resistor is one kind of passive component used to obstruct the current flow within electrical and electronic circuits. There are different types of resistors available in the market which are used based on the requirement. The best examples of resistive materials are Mica, Glass, Rubber, Wood, etc.

The unit of resistance is ohm where 1 ohm = 1V/1A. And also, these components play a key role in electronic circuits like signal levels can be adjusted, current flow can be reduced, divide voltages, transmission lines can be terminated, active elements can be biased, etc. This article discusses an overview of types of resistors and their applications.

The different functions of the resistor are voltage dividing, heat-generating, LED powering, gain controlling, matching & loading circuits, time constraints fixing.  There are different types of resistors available based on the construction, application, tolerance, characteristics, and power dissipation. Resistors are available in different shapes as well as sizes which have different properties based on the construction and manufacture. While designing a circuit, these will help in knowing the benefits as well as unique functions for every resistor. Generally, resistors are classified into two types like linear resistors and nonlinear resistors. 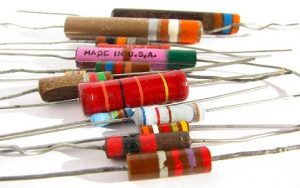 The values of these resistors can be changed once temperature and voltage are applied. Most of the types of the resistor are linear that generate a voltage drop once current supplies throughout them Linear resistors are two types like fixed resistors & variable resistors.

A wire-wound resistor is used to limit the flow of current within a circuit. The construction of this resistor can be done with the help of a conductive wire by wounding approximately a non-conductive core. The conductive wire controls the resistance value because it is made with thickness and varying alloys. Usually, these resistors are used in industrial & high power-based applications like fuses and circuit breakers.

The carbon composition resistor is a type of fixed resistor, used to reduce the flow of current to a certain level. These resistors are very old type but at present these are not used much due to less stability and high cost.

In this resistor, the internal region includes ceramic insulation material and also a metal alloy film or a metal alloy layer or carbon that is wrapped in the region of the resistor, after that it is arranged within a cermet or ceramic metal.

The construction of these resistors can be done in the rectangular or square shape where the pins or leads are below the resistors which help while placing on printed circuit boards. Cermet oxide resistors provide a constant operation within high temperatures as their values do not vary when the temperature changes.

The designing of this resistor can be done by oxidizing a Tin Chloride’s thick film on a substrate. These types of resistors are obtainable in a broad range of resistance through high-temperature strength. Additionally, the operating noise level can be extremely low that can be utilized on high voltages.

Generally, these resistors are designed through a ceramic rod with a high grid as well as resistive material. A conducting material with an extremely thin layer can be overlaid over an insulating tube/ tube which can be made by using high-quality glass or ceramic material. Further, these resistors are classified into two types like carbon film and metal film.

As compared to wire wounds, these resistors are similar. Once the power rating of a circuit is increased than the particular value, afterward this resistor can break or opens the circuit. So, this is the reason to call it a fusible resistor. These restores execute double tasks which means they restrict the current & also it can be used as a fuse.

Metal film resistor is a typical type of axial resistor and it includes a thin metal layer-like resistive element over a non-conducting body. These resistors act like a resistance wire which generates a high tolerance. Generally, the resistor film layer can be formed over glass or ceramic through sputtering or vacuum evaporation.

This resistor is the lead type and it is very convenient for maintenance as well as manual operation. Metal film resistors are used in high-frequency applications like communications, instruments & household appliances. These resistors are broadly used due to their stable performance, high precision, simple & are lightweight. These types of resistors play an essential role within the electronics industries as well as military aerospace below high-precision necessities.

The resistor which resistance value can be adjusted is known as a variable resistor. These resistors include a rotating shaft as well as a wiping contact. This is a linear sliding-type resistor wherever the sliding contact shifts linearly on top of the resistive element for changing the resistance of this resistor.

A rheostat is one kind of variable resistor that is mainly used for controlling current. In different circuits, they can change the resistance without break. The construction of a rheostat is similar to a potentiometer that uses simply two connections instead of using three terminals. The first connection is connected to one finish of the resistive element whereas another one is connected to the sliding contact which is known as a wiper.

As compared to potentiometers, rheostats must carry current. Thus they are typically designed like wire wound type resistors where the resistive wire can be wounded approximately an insulating ceramic core & the wiper slides on the windings.

An alternative name of a potentiometer is a pot meter/pot. It is a three-terminal resistor where the resistance can be changed manually for controlling the current flow. The construction of a potentiometer can be done using different materials like cermet, wire wound, carbon composition & metal film/ conductive plastic.

The o/p voltage of this resistor can be determined through the wiper position and this resistor works as a variable voltage divider. These resistors are used in audio volume control & many other applications.

Trimmers have an extra screw along with variable resistors or potentiometer for better operation & efficiency. Here, this screw is used to change the resistance value by changing its position to revolve through a small screwdriver. These resistors are built with different materials like carbon film, carbon composition, cermet & wire materials which are accessible from the 50 Ohms to 5 mega ohms range. The power rating of these types of resistors ranges from 1/3 to ¾ Watts.

So this performance is very useful while protecting circuits in voltage surges otherwise it can cause electrostatic discharges & lightning strikes. The best example of this resistor is MOV or metal oxide varistor.

The resistance of whose resistor mainly depends on temperature is called a thermistor. It is a combination of thermal & resistor. The construction of a thermistor can be done through metallic oxides which can be pressed in a bead, disk, then encapsulated through a resistant material like glass or epoxy. Thermistors are classified into two types like NTC (Negative Temperature Coefficient) & PTC (Positive Temperature Coefficient).

The term LDR stands for Light Dependent Resistor and the working of LDR will be like this, once light falls on this resistor, the resistance will be changed based on the light intensity. This type of resistor can be made through cadmium sulfide which includes fewer electrons once it is not light up.

An SMD resistor is one kind of electronic component where SMD stands for Surface Mounted Device. This resistor can be placed on a PCB circuit directly using SMT or Surface Mount Technology. These types of resistors are normally available in small size as compared to the traditional type, so it uses less space on PCB.

SMT was invented mainly for reducing the size of the components & also the time it takes to design a circuit. SMD resistors deal only with printed circuit boards that are professionally manufactured.

Other Types of Resistors

Some other types of resistors like magneto, load, shunt and pull up are discussed below.

The load resistor is one type of component, used as an ideal output when designing otherwise testing different circuits. These resistors are applicable in maximum power transfer, impedance matching enhances output stability, and makes sure the smallest amount of current flow. These resistors are used for the proper operation of the PSU in switching power supplies.

A resistor that has very little resistance is known as a shunt resistor. This resistor can be made with a material that has less TCR or temperature coefficient of resistance. This kind of resistor is connected with the ammeter in parallel and also it can be connected with the load in series whose current needs to measure. Shunt resistors are used to detect current in the circuit.

Pull-up resistors are mainly used to make sure that a wire is pulled toward a high logical level within the nonexistence of an input signal. These resistors are used in logic circuits to ensure a clear logical level on a pin beneath all circumstances.

Thus, this is all about an overview of types of the resistor and their applications. These are simply electric and electronic components but while selecting these components, some parameters need to be considered like resistance, power dissipation, voltage withstand, tolerance, voltage rating, package and mounting, material construction, capacitance, inductance, thermal range, operating noise. etc. So for a particular application, selecting an appropriate resistor is mandatory. Here is a question for you, what is resistance?