You are here: Home / Components / What is a Rheostat : Working & Its Applications

In an electric circuit many times it is desirable to restrict the current, which can either be done by reducing the voltage or increasing the resistance in the circuit (Ohm’s Law). A rheostat is a device that facilitates this. The word rheostat is derived from the Greek language meaning changing stream (current). It is a must for any electrical laboratory/workshop in order to carry out experiments under variable current and voltage conditions. This is done by inserting a variable resistance in the circuit. A smooth control provided by this is very helpful in making precise observations. Many types of rheostats are available and are in use in power/electrical circuits, but here we shall limit ourselves to sliding type linear rheostat which is most commonly used in electrical/power circuits.

What is a Rheostat?

Definition: A rheostat is a smoothly variable resistance used in order to change the flow of current in an electric circuit. A British scientist namely Sir Charles Wheatstone was the person who gave this Greek word meaning the current controlling device. 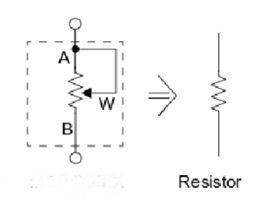 From basic electrical engineering we know that voltage, current, and resistance are interdependent and can be represented as:

Construction-wise, it has two fixed points/terminals which are the ends of a constantan wire wound over a ceramic tube. The third point is a wiper point which moves (manually or motorized) over this wound wire. As we move the wiper point connected to the circuit, we can vary the resistance. It can be linier type or the rotary type as per its construction. 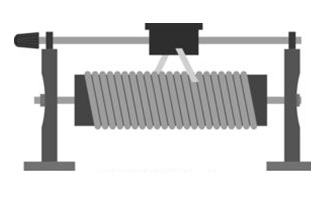 A pictorial view of a linear type is shown above which is self-explanatory.

Various standards show rheostat symbols differently, however the most commonly used are shown above. 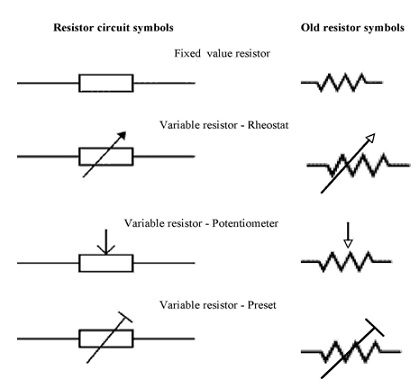 As shown in the connection diagram above. It may be added that although only a fixed point and variable point is generally required there are conditions where all the three points/terminals are utilized.

In the above figure, it will be noticed that the wiper point and one of the fixed points is connected, this is done in order to eliminate the possibility of motor armature/field getting open-circuited, should the variable/wiper point lose contact with resistance or rheostat (being a moving point). Similarly, all three points of this are utilized when it is used as a potential divider.

The rheostat applications include the following.

Difference between Rheostat and a Potentiometer

The basic difference between these two is their power handling capacity.

Various mediums can be used for rheostatic control, the most common is a resistance wire made from constantan offering stability over a wide range of temperatures.

2). What is the difference between rheostat and potentiometer?

The basic difference between rheostat and potentiometer lies in its power handling capacity. A rheostat is suitable for handling high current and voltage while a potentiometer can handle current in the low range say Ma. and Mv. Range.

3) What is the principle of rheostat?

The principle of rheostat is based on Ohms law which says that the flow of current in a conductor is directly proportional to the voltage applied and inversely proportional to resistance, physical conditions remaining constant.

4) How do you test a rheostat?

A rheostat can be tested by measuring the resistance between any of the two fixed and variable points. The change in resistance should be proportional to the movement of the wiper point as we move it from minimum to maximum. The value thus obtained should conform to the rated value.

5) Why does rheostat have three terminals?

Some specific circuit requirement calls for the usage of all the three terminals, like in the case where rheostat is used as a potential divider and where we wish to eliminate the possibility open circuit due to wiper movement.

Thus, this is all about an overview of the rheostat. It is very important and useful equipment, although it is being replaced by electronic devices but has not found its replacement in many basic functions like in Wheatstone bridge, Rotor starters, DC motor starters, etc. As testing equipment, it is an asset as it is simple, rugged, and cast effectively.