You are here: Home / Basics / Summing Amplifier its Output Voltage Calculation and Applications

Summing amplifier, as the name goes it sums up the multiple inputs and provides a single output.  At the input side, the inputs applied consists of multiple signals that is connected parallelly.  This type of amplification circuit can be designed based on inverting or an non-inverting amplifiers.

The single output from a summing amplifier can be determined by using the concept of the ohms law. Multiple input signals applied consists of resistors attached before it is connected to the terminal. The value of the input is equivalent to its connected resistor that means that applied signals proportional to the number of resistors connected to it.

What is a Summing Amplifier?

An amplifier that is designed such that it adds up the applied input signals to generate the single output is defined as a summing amplifier. This type of circuit is also known as ADDER. It is very simple to construct. Even the functionality of this amplifier is simple to analyze. The audio mixer is one of the best examples of the summing amplifiers in which the signals are mixed with the help of a mixer or adder. Changing the gain value of the summing amplifier is easier as it involves only the change of the input signal values. If the input signal value has to be constant in that case the resistor values can be altered accordingly to obtain the required gain.

In this type of operational amplifier, multiple resistors are connected to each of the applied input signals. These are summed up in such a way that an individual output signal is obtained. It is generally an inverting amplifier with the multiple input signals. 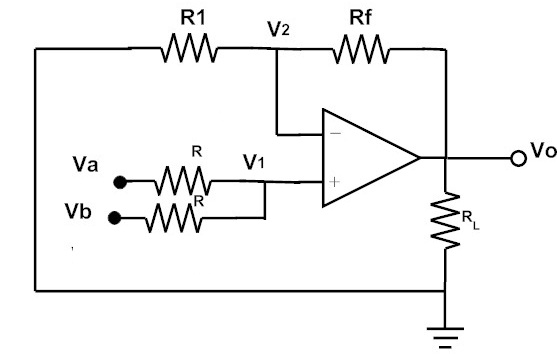 To design these amplifier circuits firstly it is designed based on the required gain. Once it is done then the necessary resistors are arranged based on it.  If the resistors considered are equal then in such case the output value of the voltage will be given as

From the above equation, the value of the output voltage can be calculated.

Let us consider the summing amplifier designed based on the inverting amplifier with the multiple input signals applied to it. Its value of the output voltage can be calculated as

The above equation represents the output voltage in the circuit of the inverting amplifier. 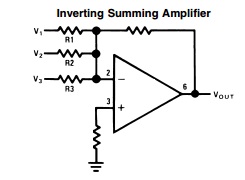 If the values of the resistors are not equal in such case the amplifier is known as scaling amplifier which is type of summing amplifier.

But here we are considering the summing circuit with equal resistance values. Then, in that case, the equation can be written as

Hence the above equation is useful while calculating the value of the output voltage for the summing amplifier with the three applied input signals.

There are various applications of summer amplifiers. Some of them are discussed below.

These are the basic converters in which the basic digital values that are in the form of binary equivalents are converted in terms of analog data. Hence these are known as digital to analog converters. In the circuits where the microcomputers/microcontrollers are utilized in such real-time monitoring systems to monitor the devices through the relays, the sensors or the motors require this type of converters. 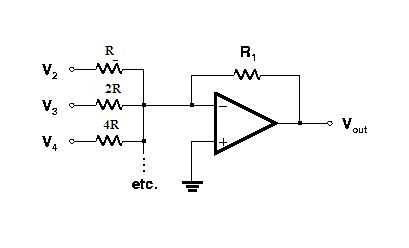 It is very useful in terms of adding multiple signals. This is possible in various musical instruments where the frequency of the two signals with different instruments to be mixed. Firstly these are converted in terms of voltage signals with the utilization of the transducers in the circuit. Then these signals are connected to the input side of the summing amplifier.

In this way, the basic applications of the summing amplifiers are discussed. Summing amplifiers are the basic circuitry that is very advantageous because of its simple to design and the analyzing techniques. Only the resistors involvement in the circuit makes the design also very easier. If the values of the input resistors are chosen in such a way that it is equivalent to the feedback resistor value. Then the gain obtained from such amplifiers is equal to that of unity. This can be designed based on inverting or non-inverting type. After discussing it can you describe the most preferred summing amplifier among these two types?