The non-inverting amplifier is the basic circuit obtained from amplifiers. As it name goes the circuit helps in achieving the non-inverted output at the final stage. Although the inverting amplifier is preferred in many cases it has two drawbacks. Firstly, the output obtained at the final stage of it is an inverted one. Obtaining an inverted output further requires any other setup to be connected to further invert the inverted output.  The second drawback which is the most major one is that the impedance at the input is dependent on the resistor connected at the input.

To prevent the effect of loading in the larger systems the impedance considered must be of greater value that is up to 10 times in comparison with the preceding circuit.  For this reason, the value of the resistor connected at the input must be chosen accordingly. This further creates other problems in the circuit.  It can be overcome by the non-inverting amplifiers.

What is a Non-Inverting Amplifier? 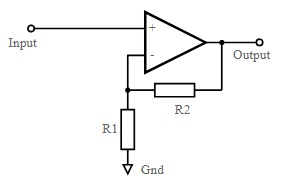 As already discussed the constructional view of the non-inverting amplifier it can be considered that the inputs applied at both the terminals are the same. The voltage levels are the same and even the feedback is dependent on both the resistors R1 and R2. In this way, it makes simple and easy to determine the gain for such types of amplifiers. As the voltage levels applied for both the terminals remain the same indirectly results in the gain levels to be high.

The voltage level determined at the inverting terminal is because of the presence of the potential-divider circuit. Then this results in the equation of the voltage that is:

But the gain is the ratio between the ratios of the output values to input values of the applied signals.

Av represents the overall gain obtained in the circuit.

R1 represents the resistance connected to the ground.

R2 represents the resistor connected to the feedback.

The resistance considered in the above equation is in ohms.

A summing amplifier is can also be constructed using the non-inverting Op-Amp. When an different voltage signals in parallel are fed to the non-inverting terminal of the Op-Amp then it becomes a Non-Inverting Summing Amplifier. 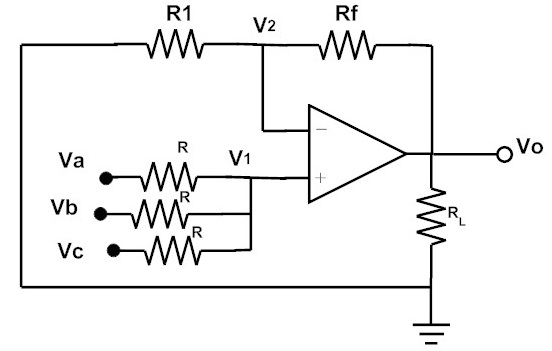 If the used resistors in the circuit are considered to be equal in terms of resistance. In that case, the equation for the output can be determined as

This amplifier generates the output the same as that of the applied input signal. Both the signals that are applied input and the generated output are in phase. Because of this reason, the potential difference across both the terminals remains the same.

Advantages and Disadvantages of Non-Inverting Amplifier

The advantages of the non-inverting amplifier are as follows:

The disadvantages of the non-inverting amplifier are as follows:

The above are some of the advantages and disadvantages of non-inverting amplifiers.

The applications of the non-inverting amplifiers are as follows:

These non-inverting amplifiers have various applications in terms of the higher values of input impedance. These amplifiers possess unit gain value. It has many valid features in terms of negative feedback applied to it. The output has a minimum or zero value of resistance. Because of this reason, the matching of the other circuits becomes easier. The separation of cascaded circuits even becomes simpler. What can be the IC number of this type of Operational amplifier that is widely used in various practical applications?