You are here: Home / Basics / ASCII Numbering System and its Conversion from ASCII to Hex

ASCII Numbering system is an interlink between the system hardware to the computer’s screen for the user’s understanding. It is treated as a common language for computers.  It is the composition of the ‘American Standard Code for Information Interchange’. The words of the text can be configured and encrypted in the form of certain codes. This is possible by using the conversion table provided. These codes are standardized and are accepted everywhere. These ASCII codes are also referred to as ‘Alphanumeric Codes’.

The 128 characters present in the English language are coded as numbers. Each character is assigned with a number from 0 to 127. To make possible the data transfer from one computer to the other computer these codes are preferred. The name suggests that these codes are a combination of alphabets and numbers. These types of codes are generally preferred for the transmission of the data. This type of encoded data can be exchanged between Computers or it can be its IO devices. There are various alphanumeric codes.

This Numbering System is one of the formats of expressing numbers in the form of characters. It is abbreviated as the ‘American Standard Code for Information Interchange’. This is the standard code that has a specific set of notations for the characters. This type of coding is widely preferred in computers mainly where the Text Files are used. The operating systems like ‘UNIX & DOS’ prefer this format. These codes are usually developed for the origin of Telegraphic codes.

This numbering system is similar to that of basic other systems including binary, octal, and decimal. This is also known for coding the data. But it is a user-friendly language. It is very efficient in terms of storing large units of data. Hence the conversion becomes easier with the help of the conversion table. It is known as the ‘base 16’ system.

There are various programs written in various languages so that just by a single click the value of one format is converted into another.

The standard values of ASCII in terms of ASCII can be provided in the conversion table. 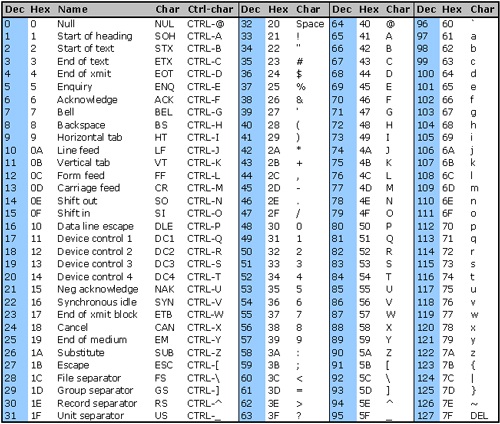 ASCII to Hex Converter and Examples

This conversion is about converting the characters in terms of the 16-bit format. The characters might be alphabets or numbers or it might space, NULL characters, etc… each of them has some specific code. Basing on this coding the data can be converted.  Let us consider the programming language JAVA.

The steps involved in the conversion are

Certain languages follow certain code formats basing on which the conversion is possible.

The values of ASCII in terms of hex are

The 1 value of ASCII in Hexadecimal can be encoded as 31. The value c can be written as 63.

In this way by using the code conversion table we can convert the characters of ASCII into Hexadecimal code. However, the ASCII code conversion is mandatory because it might be user-friendly but not machine friendly. The convenience of entering the data in the systems is easier while using a hexadecimal format. Hence many of the digital systems prefer Hex language.

Hex to ASCII Converter and Examples

By using the above steps and certain code lines the HEX values can be easily converted into ASCII codes.

Based on the standard values of conversion let us discuss certain examples.

The conversion can be made possible by grouping the digits into two.

Hence these are encoded as efg in terms of ASCII.