You are here: Home / Digital Electronics / What is Priority Encoder : Working & Its Applications

A combinational circuit like an encoder is used to perform the reverse process of the decoder. An encoder includes 2n inputs maximum and ‘n’ outputs. Therefore it encodes the data from 2n inputs into an n-bit code. It will generate a binary code that is equal to the input like active High. So, this circuit encodes 2n inputs through n-bits.

Encoding is nothing but the process of changing the numbers or symbols to a coded format. A priority encoder includes a priority function that allows it to produce an output equivalent to the high order input. This article discusses an overview of the priority encoder.

What is Priority Encoder?

This encoder has the priority function which depends on the input’s relative magnitudes. Therefore, the input including high magnitude must be encoded first. In several practical applications, these encoders select the inputs with maximum priority. So this kind of selection process is known as arbitration.

The best example of arbitration is, the computer has several input devices where these devices try to provide the data for the computer immediately. In those situations, this allows the input device that has the maximum priority between those devices which try to access the system simultaneously.

There are different forms of priority encoders available. Some of the best examples are discussed below like 8 to 3 type & 4 to 2 type

These are standard integrated circuits and the best example of this is the TTL 74LS148 which includes 8 active LOW inputs & provides 3 outputs. 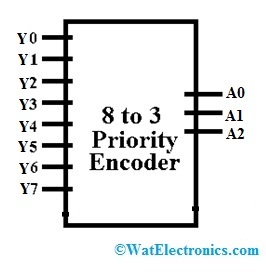 In the above tabular form, ‘X’ equals “don’t care”, that is logic “0” or logic “1”. From this truth table, the Boolean expression for the above type with data inputs Y0 to Y7 and outputs A0, A1, A2 is given as:

In 4 to 2 types, the total inputs are four namely D0, D1, D2 & D3, and outputs are two like X & Y. Here ‘Do’ has fewer priority inputs whereas ‘D2’ has high priority inputs. Once the above one input is ‘1’ simultaneously, the output will be the binary code that is equivalent to the high priority input. The truth table for the 4 to 2 lines is shown below. 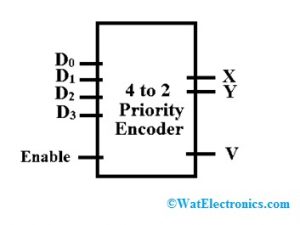 If input ‘D2’ is high then the output will be 10 whether the D1 is high or low. The input condition like ‘V’ to confirm there is any input. So, when there is any input than “V” will be high. Input and output variables are D0 to D3 & X, Y, V correspondingly.

The truth table of 4 to 2 priority encoders is shown below. 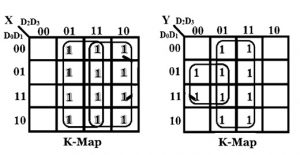 Like normal encoder expressions, this type of encoder expression is also the same however there is a statement like Y = 1 for input D1 simply when D2 input is low because according to the truth table, for D2 = 1, then ‘Y’ must be “0”. So, 4 to 2 priority encoder circuit diagrams using OR, NOT & AND logic gates.

This type of encoder gives priority to every input. So, Verilog code for 8 to 3 priority encoder is shown below which includes design as well as test bench code. Outputs of this are set based on the input’s priorities. So if the encoder input is present with high priority, then inputs through fewer priorities are neglected & produce output based on the maximum priority input.

Difference between Encoder and Priority Encoder

The applications of the priority encoder include the following.

Thus, this is all about an overview of the priority encoder. This is a special type of encoder, used to eliminate the problem associated with normal encoders. In this encoder, priority increases when the movement is in a downward direction. So the LSB (low significant bit) will have the lowest priority whereas the MSB (most significant bit) includes the maximum priority. Here is a question for you, what are the different types of encoders?