You are here: Home / Basics / Binary Adder and Subtraction Circuits and its Types

There is a basic difference between the Inclusive type of OR gate and the Exclusive type. The inclusive is known for the addition of the integers. For the binary arithmetic operations, exclusive OR gates are preferred.

What is a Binary Adder?

The adder that performs the addition of the binary values and generates the sum in the same format can be referred to as Binary Adders.  These types of circuits are utilized in the calculators, computers for ALU units, etc…

The sum value produced by the above operations produces the value of the single-digit . But in the case where both the bits are present, that is ’11’ a carry is generated. The first term used besides is known as augends and the second term is known as an addend.

The operation performed is dependent upon the number of bits. If the addition of two bits is to be done then half adder is preferred. If it is about three bits then the full adder circuit is preferred.

This the circuit is of combinational type. The two inputs of binary are applied for which it results in two binary outputs. When the addition of inputs takes place the resultant generates a ‘Sum’ and the ‘Carry’.

The circuit with logic gates and the truth table of this circuit is as follows; 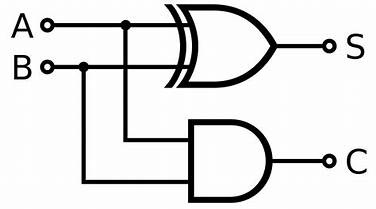 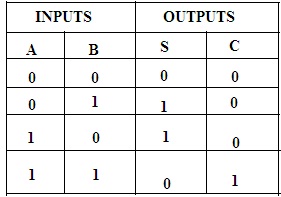 The  half adder circuit  can only add two numbers.  If it is required to considered the carry bit for the next sequence of addition then in that case the half adder circuit will not work. In this scenario, we go in for a full adder circuit which takes in the three inputs.  Among those three the two bits results in sum and the third bit is for carrybit from the previous addition . At the outputs two bits are obtained which is the sum and the carryout.  The addition of the bits initiates from LSB. If the carry is generated in the first LSB bits then it will be passed further. 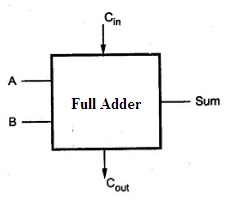 The circuit diagram and the truth table of this circuit are as follows: 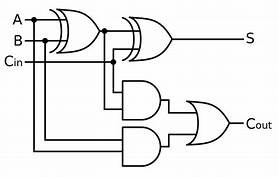 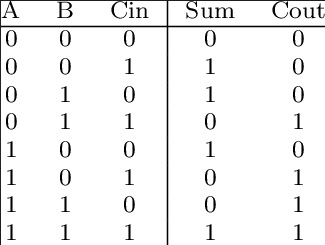 This is also a combinational type of circuit. It possesses multiple outputs. Initially, two digits of input applied to generate two values of outputs that are difference bit and the borrow bit. This process of operation can be carried out by the XOR gate including the AND gate as an additional one.  Where the value of the input is complemented by NOT gate before given to AND gate. 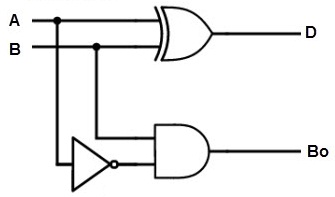 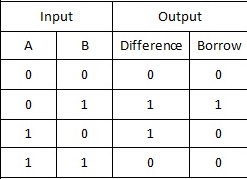 Full Subtractor performs the subtraction process which involves three bits of input that generates two bits as output.  Among those three digits, two are preferable digits for subtraction and the other digit, borrow generated from the previous operation.

The circuit representation and its truth table can be described as 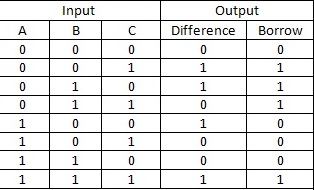 The parallel circuit for the addition of the binary values can be obtained by establishing a connection between the ‘Full Adders’. The connection is possible by connecting the output carries as the input to the other adders. Based on the number of bits number of full adders is connected.

These circuits of adders are enclosed in the form of IC’s. These are designed such that it must have terminals of four augends and terminals for the adding the bits. The two numbers can be added simultaneously in these circuits. But there is no value of carrying at the least position. In these adders, the primary block is half adder followed by full adders.

The parallel type of Binary Subtractor can be designed with 4 bits. Let us consider A-B. In this case to perform subtraction one has to take two’s Complement of B. then that complemented value should be added to A.

The bit values ‘A3A2A1A0’ known as Minuends in the circuits are subtracted by the Subtrahend of ‘B3B2B1B0’. The borrow generated can be connected further as the input value for the preceding subtraction unit. 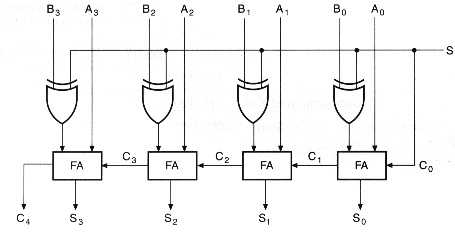 Each of the XOR gate used in the circuit consists of two input connections. Among those two inputs, one is for M and the other is for B. as the S value is maintained 0 B XOR of 0= B.  Then the circuit performs the task of addition.  When S =1 the circuit produces B XOR of 0 = Complement of B. Then the value that is complemented is added to A.  This kind of operation is also referred to as two’s complement. Hence the two arithmetic operations are performed in a single circuit.

Practically in the process of addition and subtraction can be performed by these circuits in computers, the devices where the micro controller is the basic units and the digital calculators. These are also preferred in networking as well as the Digital Processing of the Signals. We have discussed the parallel adder above. In that process, the carry has been forwarded to the next stage.  If in certain stage carry is not generated the circuit generates time delay. To overcome another adder circuitry is designed. Can you identify which circuit can overcome the delay in the addition operations?