You are here: Home / Embedded Systems / What is PIC Microcontroller and Its Architecture 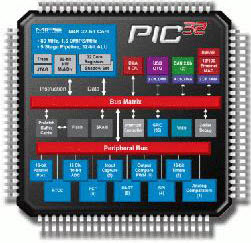 We know that the microcontroller is an integrated chip which consists of CPU, RAM, ROM, timers, and counters, etc. In the same way, PIC microcontroller architecture consists of RAM, ROM, CPU, timers, counters and supports the protocols such as SPI, CAN, and UART for interfacing with other peripherals. At present PIC microcontrollers are extensively used for industrial purpose due to low power consumption, high performance ability and easy of availability of its supporting hardware and software tools like compilers, debuggers and simulators.

What is a PIC Microcontroller? 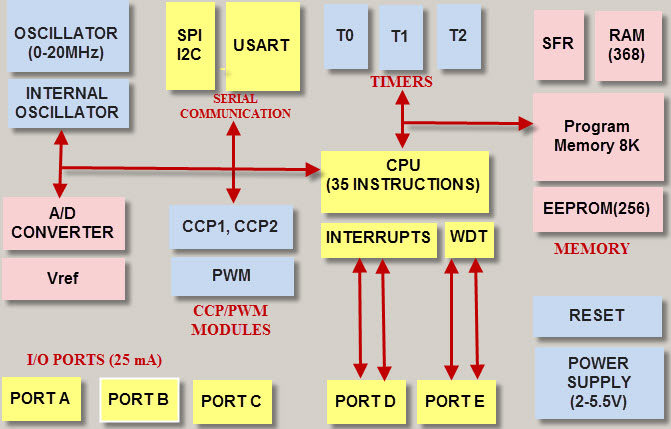 It is not different from other microcontrollers CPU and the PIC microcontroller CPU consists of the ALU, CU, MU and accumulator, etc. Arithmetic logic unit is mainly used for arithmetic operations and to take logical decisions. Memory is used for storing the instructions after processing. To control the internal and external peripherals, control unit is used which are connected to the CPU and the accumulator is used for storing the results and further process.

The memory module in the PIC microcontroller architecture consists of RAM (Random Access Memory), ROM (Read Only Memory) and STACK.

These registers are used for general purpose only as the name implies. For example, if we want to multiply two numbers by using the PIC microcontroller. Generally, we use registers for multiplying and storing the numbers in other registers. So these registers don’t have any special function,- CPU can easily access the data in the registers.

Flash memory is also programmable read only memory (PROM) in which we can read, write and erase the program thousands of times. Generally, the PIC microcontroller uses this type of ROM.

BUS is used to transfer and receive the data from one peripheral to another. It is classified into two types such as data bus and address.

Data Bus: It is used for only transfer or receive the data.

Address Bus: Address bus is used to transmit the memory address from the peripherals to the CPU. I/O pins are used to interface the external peripherals; UART and USART both are serial communication protocols which are used for interfacing serial devices like GSM, GPS, Bluetooth, IR , etc. 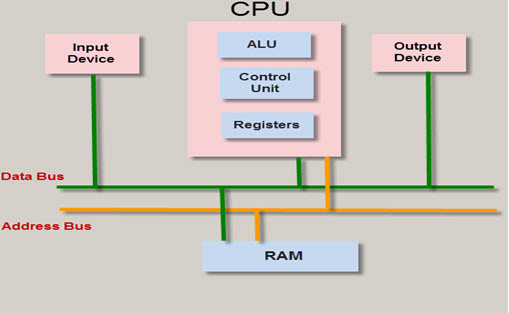 PIC microcontroller has four timer/counters wherein the one 8-bit timer and the remaining timers have the choice to select 8 or 16-bit mode. Timers are used for generating accuracy actions, for example, creating specific time delays between two operations.

PIC microcontroller consists of 20 internal interrupts and three external interrupt sources which are associated with different peripherals like ADC, USART, Timers, and so on.

The name  CCP module  stands for capture/compare/PWM where it works in three modes such as  capture mode, compare mode and PWM mode.

The main intention of this project is to detect the movement of vehicles on highways to switch on a block of street lights ahead of it, and also switch off the trailing lights to conserve energy. In this project, a PIC microcontroller is done by using assembly language or embedded C. 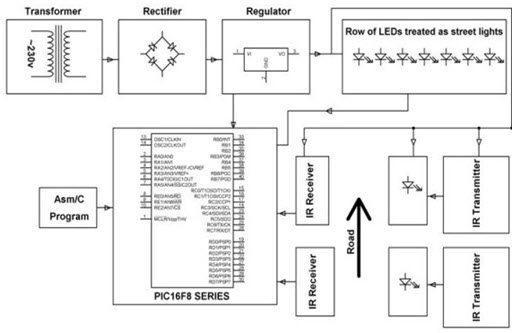 Street Light that Glows on Detecting Vehicle Movement by Edgefxkits.com

The power supply gives the power to the total circuit by stepping down, rectifying, filtering and regulating AC mains supply. When there are no vehicles on highway, then all lights will turn OFF so that the power  can be conserved. The IR sensors are placed on the road to sense the vehicle movement. When there are vehicles on highway, then the IR sensor senses the vehicle movement immediately, it sends the commands to the PIC microcontroller to switch ON/OFF the LEDs. A bunch of LEDS will be turned on when a vehicle come near to the sensor and once the vehicle passes away from the sensor the intensity will become lower than the LEDs will turn OFF

Thus, this is all about PIC microcontroller tutorial which includes PIC microcontroller architecture, advantages, disadvantage and applications. Apart from this, for any help regarding any electronic and electrical projects, you can contact us by commenting in the comment section below.