You are here: Home / Communications / What are Network Devices : Types & Their Working

The development of computer networking started with the progress of Arpanet in the period of the ending of the 1960s and in the initial stages of the 1970s. Before the networking devices, there were computer vendor networks which are mainly constructed to associate connection between terminals and remote job entry locations with that of the mainframe. Whereas the crucial thought behind the networking was to accomplish network sharing and it was the basis in the ARPANET design. It is even more important to know about the transmission and reception of data. So, this article explains what are computer network devices, types, and how they are employed?

What are Network Devices?

The hardware devices which are employed for establishing a connection of fax machines, computers, printers, and other electronic equipment with that of the network are termed as network devices. Through network devices, the information can be transferred in a more quick and exact approach across similar or various kinds of networks. These devices can be of either intra or interconnected type. Few of the devices are connected on the devices such as RJ45 connector and NIC cards, while few devices are installed on the devices like switches, gateways, routers, and others.

Network devices correspond not just as computers and wiring. These devices can function on some distinguishing activities like managing digital network connections and efficiency. The main functionalities of these devices are handling traffic (isolates huge networks and filter data traffic) and connectivity (various kinds of protocols are utilized by various kinds of networks and establishes connections across them). 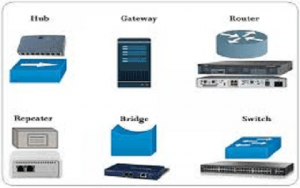 Let us discuss the main and most employed networking devices more in detail.

For the collective connection of networking devices, hubs are mainly used. This network device also functions as a repeater where it boosts the poor signals those lose their strength after traveling for long distances over cables. This is the simplest network device used for device connection due to the reason it connects LAN devices using similar protocols. The device can be employed with both the analog and digital data by configuring the settings to format the incoming information.

Based on the usage deployment, the hubs are classified into three types which are active, passive, and intelligent hubs.

Active Hub – The main features of an active hub are

This hub examines the information that is transmitted to the connected devices. This plays a unique responsibility in the network topology by the employment of store technology where it monitors the information before transmission and then prioritizes what packet has to transmitted initially.

The active hub also resolves the issues raised in the damaged products and manages the distribution and direction of the remaining packet. When a weekly readable signal is received by the port, then the hub amplifies the signal and then retransmits it to the other ports.

When there arises any functional error in the network, it amplifies the signal. So, the active hub helps for service continuance in the LAN connection.

Passive Hub – Passive hubs hold the responsibility of distributing the signal receiving from the ports. It helps in finding the bugs and detecting the defective hardware. It consists of a 10base-2 port and RJ-45 connectors that have connections with every local area network tool. This connecter is operated as a basic one in your network. AUI ports are located in the advanced passive hubs that have a connection like a transceiver based on the network design.

Intelligent Hub – When compared with active and passive hubs, intelligent hubs have more benefits. People who desire to extend businesses in networking might allocate users to use the same pool in an effective way through these hubs. These hubs are more in demand these days because of this creative approach.

Implementing an intelligent hub enhances the performance of a LAN connection. When there arises any defect in the physical equipment, it can be found easily and resolved through management data that is corrected by the hub.

The other enhancement of intelligent hub over active and passive hubs is finding the centralized management tool which assists to know about the network that runs out of the device in finding minimal operating devices.

This is the one type of network device that functions at the OSI physical layer where it amplifies or regenerates the incoming signal before transmission. Repeaters are used in the networking components to enhance the coverage area so these are termed signal boosters.

When there is the transmission of an electrical signal across the channel, it gets attenuated based on the channel’s behavior and technology. This creates a restriction on the length of the LAN connection or expansion area of the cellular networks. This issue can be eliminated by the installation of repeaters at periodic intervals. 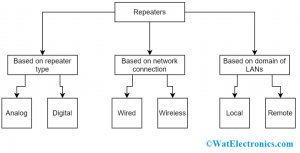 Types of Repeaters in Network Devices

Repeaters boost up the attenuated signals and then performs retransmission. Digital type of repeaters also performs signal reconstruction altered by transmission loss. So, these devices are mainly employed to establish the connection between LANs thus creating a huge LAN connection and this connection is shown below: 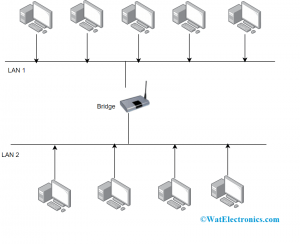 A bridge is the network device that established a connection between various LANs thus forming a larger LAN. This scenario of grouping networks is termed network bridging. As various components are connected in a single line through the bridge, they appear to be a single network. The functionality of bridges is at the data link layer of the OSI model and so these network devices are also called Layer 2 switches.

There are mainly two types of bridges which are:

Source Routing Bridge Connection – Here, routing functionality is achieved by the source station and the frame decides the direction of the route. The frames can be known by the host by transmitting a special frame named as discovery frame and this distributes across the whole network by using the entire viable directions to a destination.

Transparent Bridge Connection – Here the bridge is completely ignorant of the bridge’s presence which means that a bridge is either added or removed from the network or not, irrespective of the stations’ reconfiguration. The transparent bridge connection uses two approaches which are bridge learning and bridge forwarding.

When compared with hubs, switches have more creative functionality. This is a multiport device that enhances network performance. A switch supports restricted routing data regarding nodes in the internal network and it permits connections for systems such as routers and hubs. In general, switches have the functionality of knowing hardware addressing of incoming packets and transmission of those to the proper destination.

Implementation of switches in the networking devices enhances network performance over routers or hubs as because of virtual circuit ability. They also increase the network protection due to the reason that virtual circuits are more complicated to determine with network monitors.

The functionality of the switch is the Data Link layer of the OSI model. A multilayer switch has the ability to function both at network or data link layers of the OSI thus making the device to function as a router and switch.

Switches can be addressed to distributed denial of service (DDoS) outbreaks; flood guards are utilized to avoid malevolent traffic from getting the switch to a stop. Switch port protection is crucial so be sure to safeguard switches: Deactivate the entire unused ports and implement DHCP snooping, ARP review, and MAC address filtering.

For a router connection, there has to be a minimum of two networks which can be of two LANs or LAN and WAN. Mainly, routers are located at the gateways where there is a network connection. Routers generally choose the best path to the transmission of packets to reach faster. The basic approach of the router is shown below: 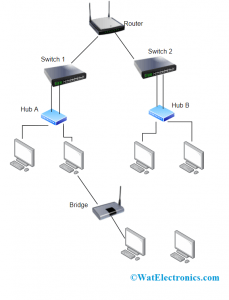 The name itself indicates that it acts as the passage in connecting two networks that might operate upon various networking approaches. Usually, these network devices act as messenger drivers who collect information from one system, interpret it, and then establishes transmission of data to other systems. Gateways are also termed protocol convertors and might function at any layer of the OSI model. These are complicated than router or switch.

Brouters are also called bridging routers where they consolidate the features of both the router and bridge. These devices can operate at network or data link layers of the OSI model. In the view of functioning as a router, it holds the ability to route packets across various networks and performing as a bridge. Brouters also function in filtering LAN traffic.

Modem, which can function as both modulators and demodulators. Modems are used for the transmission of digital signals over telephone lines which are analog in type. So, digital signals are transformed by the modem into analog signals of various frequencies and broadcasted to a modem at the delivery location.

Please refer to this link to know more about Network Topology MCQs.

Please refer to this link to know more about Network Topology and Bridge in Computer Network.

Please refer to this link to know more about Network  Theory

Please refer to this link to know more about Network Devices

These are the main types of network devices.