You are here: Home / Communications / What is a Network Interface Card : Types and Its Working

In the past years, computers are worked as stand-alone systems. To establish the communication, to perform computations between the multiple computers and to share the files among them, a portable medium of storage is required. At present in the modern world, communication among the devices is a must to share information. This communication is possible through the establishment of a dedicated path. This is made possible by the phenomenon called the internet. It can connect multiple devices to a single node of communication. This system was designed in 1973 by Robert Metcalfe. Finally in 1981 by 3COM, a 10 Mbit/sec Ethernet adapter is built. The communication of computers through the internet is done by the hardware component present in the computer is the Network Interface Card (NIC).

What is a Network Interface Card? 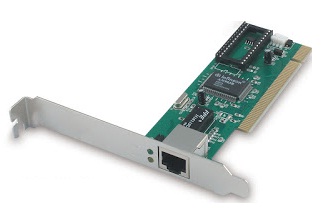 Based on the slot for inserting the card into the motherboard NIC’s are classified into two types. They are:

The most common word that is used for internet connectivity is specified by a word known as Ethernet. The board present in the computers are provided internally with a slot for ethernet connectivity. The standard preferred for the establishment of an ethernet connection is ‘Register Jack’. This is commonly referred to as RJ 45connector.

The components present in the Network Interface Card are:

How Do Network Interface Card Works?

The steps involved in the network connection establishment are as follows:

The above steps are followed to establish the communication of the devices through the internet. As the NIC is known as the physical layer device. The data transmitted is known as frames.

The functions performed by the Network Interface Card are

For the wired networks, a port is essential to connect the ethernet cable. It has a direct connection with the hub or switches present at the center. The resources or the data shard is based on their MAC address accessing. The wired network ensures the presence of physical cable for communication of the devices.

A wireless network connection doesn’t require any physical connection. Other than cables the network access is done through the antenna provided. The radio waves are the mean of communication between the device and the central switch that is wireless.

Based on the components chosen during the connection establishment the performance depends on such pieces of equipment. Both wired and wireless connectivity are the functions performed by the NIC.

1). Where is a network interface card located?

2). Why is a network card important?

A hardware present on the computer’s motherboard is known as a network card. The card is important in the establishment of a wired connection between the computer over a network.

3). Is a network card an input or output device?

The purpose of the network card is to establish a path of communication between the user and the computer. This path works for both sending the data and collecting back the data from the computer. Hence, the NIC is an Input/Output device.

4). What is the difference between NIC and Ethernet card?

The NIC card can provide access to Ethernet. But Ethernet card possesses multiple ports for internet connection. Along with Ethernet it also consists of an antenna to provide a wireless connection.

Please refer to this link to know more about Network Interface &  Bridge in Computer Network.

Please refer to this link to know more about Network Interface Card MCQ.

The NIC is the communication medium between the multiple computers for easy information exchange. It is known for preparing the data and also controls the data. Each transmitted data has a unique identification address known as the MAC address. As we have learned about how NIC acts as a medium of communication. But what type of cable can be used to connect one NIC with another NIC?