You are here: Home / Communications / What is Analog Modulation : Types & Its Applications

Conveying of our messages to someone happens through voice, few gestures, expressions. This is the human way of communication. Whereas in the technological context, there are multiple ways of transmitting messages either in the form of audio, digital bits and baseband signal transmissions. The fundamental method of transmission is telecommunication and modulation is the core system for any of the telecommunication devices. These days, the standard forms of communication devices are co-axial cables, microwaves, copper wires, and even wireless communication. The transmission happens either in the form of analog or digital and these signals have to be modulated to remove noise effects, to travel over long distances and remove attenuation effects. And the one kind of modulation we are going to discuss today is “Analog Modulation”.

What is Analog Modulation?

An analog signal is a continuous wave where the time differing variable of the wave is represented in the relation of other time differing quality which is analogous to other time changing signals. And analog modulation is the procedure of transmitting low-frequency signals such as TV signals or audio signals with that of high-frequency carrier signals like that of radio frequency signals. In this type of modulation, a bandpass channel is required where it corresponds to the specified range of frequencies. These frequencies are transmitted over a bandpass filter which allows certain frequencies to pass preventing signals at undesirable frequencies.

When the carrier signal is represented by the equation 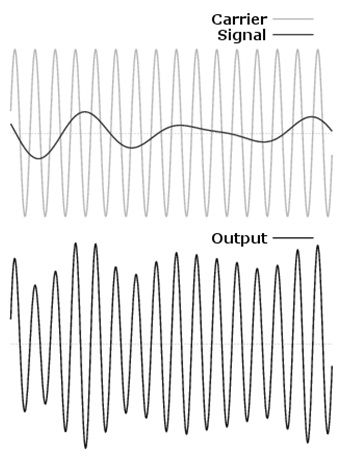 When the modulating (input signal) is represented as

and the carrier signal is represented as

And in the expressions, Ai and Ac represent the amplitudes of two waves while fi and fc are the frequencies of the two waves correspondingly.

Solving the two expressions, a modulated wave is represented as

The modulating signal has a bandwidth which is twice the bandwidth of the message signal i.e. 2fi 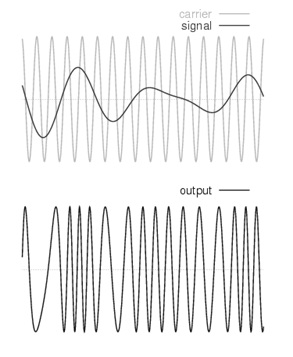 When the modulating (input signal) is represented as i(t)

and the carrier signal is represented as

then the frequency-modulated wave is

In phase modulation, the phase of the carrier signal is varied in correspondence with the amplitude of the modulating signal by maintaining amplitude and frequency at constant. Here, is the pictorial representation of phase modulation.

Here Ac represents the amplitude of the carrier signal

And m(t) represents the modulating signal

Advantages and Disadvantages of AM Transmission

Both the modulation types are with certain limitations, advantages, and disadvantages. Few of to be discussed are as below:

As analog modulation consists of various types (amplitude, frequency, and phase), there is a wide range of applications using these techniques. Some of the applications are:

1). Is digital better than analog?

Both signals have their own pros, cons, and applications. Apart from those, digital signals are far better than analog signals because digital information is easily represented, reproduced, and generated too.

2). What is analog communication?

This kind of communication represents the transmission of continuous time modifying signals that propagate in the form of Electromagnetic waves.

3). What is modulation in simple words?

It is the procedure of varying the characteristics of the carrier signal with the input signal where the data is to be transmitted.

4). Which type of modulation is used in TV transmission?

As TV transmissions require both audio and video signals, FM is necessary for audio signals and AM for video signals.

5). What is analog to analog conversion?

Analog-to-analog also called modulation is the interpretation of analog data through analog signals. It is the procedure where the properties of the carrier wave are modified as per the amplitude of the message signal.

As because of the wide range of applications, more benefits, and implementations, analog modulation types gained more prominence to transmit signals. Know more about the concepts of what are the derivatives and other waveforms related to analog modulation?