You are here: Home / Components / What is Light Emitting Diode : Working & Its Applications

At present, one of the latest inventions in diodes is an LED or light-emitting diode. These light bulbs are used almost everywhere from cell phones to large display boards. Day by day, its popularity & its usage is increasing rapidly because of some extraordinary properties. In particular, light-emitting diodes are extremely small in size & consume less power. Generally, light-emitting diodes are active semiconductor-type electronic components. As compared to a normal diode, an LED is quite similar but the only difference is, LEDs generate light in different colors. The two terminals of LED like anode and cathode can be connected to a voltage source within the exact polarity to emit different colors of light according to the semiconductor substance utilized in it. This article discusses an overview of a light-emitting diode or LED.

The first light-emitting diode or LED was invented by Nick Holonyack in the year 1962. He was an employee of “General Electrics” so he helped in inventing the light-emitting diode. However, before this invention, a British scientist namely “Henry Joseph Round” observed the chance of LED lights. After twenty years, a Russian researcher namely “Oleg Losev” was published a paper on the detailed LED invention.

Generally, the LED was a technical revolution that was invented after several researchers researched more than the first half of the 20th century. For many years, researchers researched LED but not invented by anyone until 1962. After the experiment of Mr. Holonyack’s LED lights, these lights are noticeable to the human eye so most of the people started using a LED light.

A grad student namely “George Crawford” was invented the first yellow color LED. After that, an inventor namely “Thomas” was invented a diode with high brightness that could be utilized instead of the light bulbs.

A last in the year 1979, an inventor named” Shuji Nakamura” was invented a blue color diode. But these diodes were very expensive so they could not be utilized for commercial purposes until 1990. There are many stages involved while developing LED to obtain present-day standards.

By using modern techniques in packaging & a planar method of chip manufacture, Fairchild semiconductor launched LED into a beneficial product through a variety of uses.

What is Light Emitting Diode?

The light-emitting diode is designed as a semiconductor material i.e, colorless & the light is emitted throughout the connection of the diode. The applications of LEDs involve numeric as well as alphanumeric character displays like dot-matrix & segmental. The single line segment can be made using numerous LEDs whereas a single LED is used for designing the decimal point. 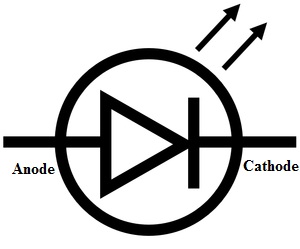 The different materials used to make LEDs include the following.

In the LED semiconductor material, the charge carriers are enclosed in energy bands. So, the division of the bands will decide the energy of photons of the light particles that are generated through the LED. The energy of the photon will decide the wavelength of the produced light & its color.

Different types of semiconductor materials include different bands which emit different light colors. The specific color or wavelength can be adjusted by changing the emitting light. Light-emitting diodes include compound semiconductor materials, which are fabricated with group-III & V elements in the periodic table. So the examples of these group materials are used to fabricate LEDs like GaAs – gallium arsenide & GaP – gallium phosphide

In the mid-year of 1990, the light-emitting diodes are available in a partial range of colors & in particular commercial white and blue color LEDs did not exist.

In the above, we have already mentioned that the material used in constructing different color LEDs. The p-type semiconductor layer is arranged on the N-type layer due to the recombination of charge carrier takes place within p-type. 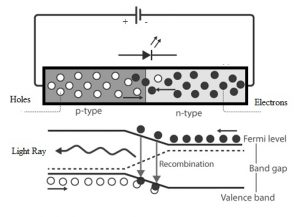 In addition, it is the exterior of the device, so, the emitted light can be simply observed on the outside. If P-type is located under the light will be generated from the outside of P-type however we cannot notice it. So, this is the main reason that the P-type layer is located above.

The gold-film layer plays a key role in enhancing the efficiency of an LED. This layer is placed on the N-type layer to indicate the base surface of the LED. If any important element of emitted light tends to strike the base surface, the light will be replicated from the base to the pinnacle surface.

The working principle of the light-emitting diode mainly depends on the quantum theory. This theory defines that once the energy of the electron reduces from the maximum range to the minimum, then it generates energy within the photons form that is equivalent to the gap among the two levels like higher and lower.

The connection of light-emitting diode can be done in the forward-biased so this kind of biasing allows the flow of current within the forward direction. Here, the current flow will be available due to the movement of the electrons within the reverse direction.

The recombination confirms that the flow of electrons from the conduction to valence will emit electromagnetic energy within the photon’s form. The photons energy is equivalent to space among the two bands like conduction & valence.

The working principle of the light-emitting diode is, it is a two-terminal PN- junction semiconductor diode. When it is triggered then emits light. Once an appropriate voltage is given to the terminals of LED, then electrons will recombine with holes in the device and generates energy in the photons form. So this kind of effect is called electroluminescence & the light color can be decided through the bandgap energy of the semiconductor.

The most important characteristics of LED are discussed below.

An LED is similar to a PN Junction Diode and it permits the flow of current simply in a single direction.
LED includes two terminals namely anode (positive) and cathode (negative). To operate the light-emitting diode properly, then the anode of LED must be connected at high potential as compared to the cathode because the flow of current direction will be from anode terminal to cathode. If the diode is connected in the reverse direction then it will not conduct.

Each LED can be rated through the highest forward current that is secure to supply throughout it without damaging the diode. For instance, the current rating of 5mm LEDs has 20mA-30mA whereas 8mm LEDs include 150mA.

LEDs are also rated for forwarding voltage that means the voltage necessary for the light-emitting diode to conduct electricity. For instance, the current rating of 5mm LEDs has 20mA however the forward voltage changes one LED to other. The voltage rating of Red color LEDs has 2.2V, the Blue color has 3.4V & the White color has 3.6V.

The VI characteristics of LEDs include the following.

Once the LED is connected in forward bias using 2 to 3 volts across its two leads then it produces the invisible infrared, noticeable colored, otherwise narrow bandwidth laser light So in this state, it demonstrates that the forward current is approximately stable at the beginning stage however when it is completely turn on, the current in the forward direction will be increased constantly. 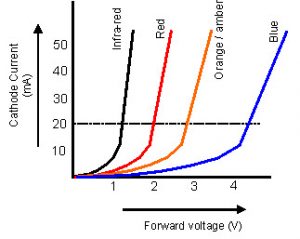 The features of the light-emitting diode include the following.

There are different kinds of LED which include the following.

Through-hole, LEDs are existing in various sizes and shapes. The most common types of LEDs are available in 3mm, 5mm & 8mm, and various colors such as Red, Yellow, White, Blue, Green, etc.

The next type of LEDs are Bi-color LEDs, as the name suggests, can emit two colors. Bi-color LEDs have three leads, usually two anodes and a common cathode. Depending on the configuration of the leads, the color will be activated.

RGB LEDs are the most famous light-emitting diodes which include three LEDs on a chip. The output of this LED can be controlled through a technique called PWM or Pulse Width Modulation so that a wide range of colors can be produced.

As the name suggests, the power rating of these LEDs has high or equivalent to 1 Watt. As compared to normal diodes, these LEDs have high power dissipation. These kinds of LEDs are extremely bright, so these are frequently used in Spotlights, Automobile Headlamps, Flashlights, etc. As the power dissipation of these LEDs is high, then heat sinks & proper cooling are necessary. The input power used by these diodes will be extremely high.

The simple LED circuit using a resistor, LED, and battery is shown below. For beginners, this circuit is very simple to make on a breadboard. This circuit can be built with three essential components like breadboard, 9V battery, 5mm LED, and 330-ohm resistor. 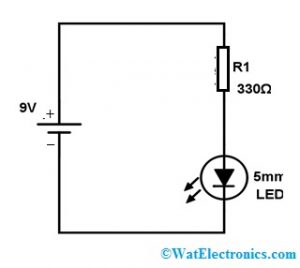 How this Simplest LED Circuit Works?

Generally, light-emitting diode lights are designed to light up at a set voltage of approximately 2V. The precise voltage value will be changed based on the LED light.

When the voltage is increased then a high current will be supplied if there is no resistor. These diodes can handle around 20mA of current securely. So we have to connect a resistor within the circuit to restrict the flow of current.

The resistance value can be calculated through this equation

Here in the circuit, the light-emitting diode has a 2V drop already, the resistor should include a 7Volts drop including 20mA of current across the LED. So the required resistance 7/0.02A => 350 ohms. Thus, this circuit uses 330 ohms of resistor which will make sure a current somewhat higher than 20mA.

The key terms used in an LED are electro luminance, efficiency, and epoxy resin.

The advantages of light-emitting diodes include the following.

The disadvantages of light-emitting diodes include the following.

The applications of light-emitting diodes include the following.

Thus, this is all about an overview of light-emitting diode or LED. These are most frequently used in lighting systems of entertainment as well as lighting. The popularity of LEDs has been increasing day by day in different fields like retail, hospitality, etc. The main benefits of LEDs are less power consumption, longer life, illumination is brighter, etc. So, LED manufacturers have started designing their products completely for the decorative & entertainment sectors. Here is a question for you, what is RGB LED?