You are here: Home / Electronics / What is Energy Band : Theory & Its Types

What is Energy Band?

Energy band definition is, according to Bohr’s theory, every shell and associate shell of atoms include a discrete quantity of energy. An atom contains different energy levels and once atoms are brought nearer to each other, then electrons at the outside shell will interact with each other. So, this bonding force among electrons is known as inter-atomic communication.

This communication can cause the change within energy levels of electrons at the outside shell which will increase energy band theory. Thus, the range of electrons will not be at a similar range, the electrons ranges will be changed to a value that is lower or higher as compared to the original level. Every substance includes the different quantity of electron energy that is present within the energy bands depending on these energy levels.

Based on Bohr’s theory, each shell in an atom includes a separate quantity of energy on different levels. So, energy band theory states that the communication of electrons among the external and internal shells. There are three different energy bands based on the energy bands theory: Energy bands are classified into three types like following. 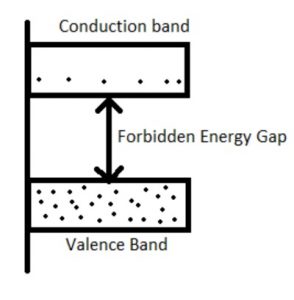 In solids, different ranges of energies can be present at complete zero temperature and the band which can be formed through the maximum energy range is known as the valence band which includes valence electrons.

To form a solid, atoms are bringing nearer together, the levels of discrete energy are interrupted due to the quantum mechanical effects. In an individual atom group, the electrons can occupy a band of levels within the solids which is called a valence band. The formation of this band can be done through the electrons at an outside shell.

In electrons in solids do not wait in the forbidden gap due to the absence of an energy state within the region. The solid’s electrical conductivity can be determined by using a forbidden gap.

As compared to the valence band, the electrons within the conduction band have maximum energy. In this band, electrons cannot jump into the center of the atom. This band can be arranged on the Fermi level.

The diagram for the valance & conduction bands and the forbidden gap is shown below. Here, based on the forbidden gap size, formation of semiconductors, insulators & conductors can be formed. There are three types of energy bands like the following.

In energy bands, the bandgap can be defined as the small amount of energy necessary for a flow of electrons to break free of its bounce state. Once the energy of the bandgap is met, then the electron can be excited into a free condition, thus it can participate within conduction. 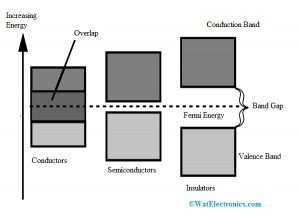 Conductors are metals that allow the flow of current like aluminum, copper, gold, silver, etc. In conductors, there is no forbidden gap between the two bands like valence and conduction which is shown in the energy band diagram. So these two bands will overlap. At room temperature, the flow of electrons which are available will be high.

The properties of conductors include the following.

Insulators do not allow the flow of current and the best examples are wood, glass, etc. Insulators have less conductivity and high sensitivity. The energy bandgap within the insulator is extremely high like 7eV. These materials cannot conduct because there is no flow of electrons from one band to other like valence to the conduction. The energy bandgap diagram of insulators is shown below.

The properties of insulators include the following.

The properties of semiconductors include the following.

Thus, this is all about an overview of an energy band gap, theory, and its different types with properties. Energy band theory is nothing but the interaction between the innermost and outermost shells. The classification of energy bands can be done based on the theory of energy bands like valence bands, forbidden bands, and conduction bands. Here is a question for you, what is the energy gap?