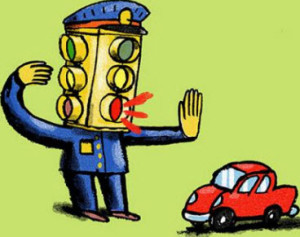 In China, there were unsuccessful efforts to change the importance of “red” to “go” during the Cultural Revolution. Typically traffic lights consist of three types of colored lights such as red, orange and green. In a typical cycle, turning on of a green light allows traffic to continue in the way indicated. Similarly,lighting of the amber/orange light for a short time of transition represents a signal to prepare to stop, and the Illumination of the red signal disallows any traffic from going on.

So far we have given the introduction about traffic signals, and therefore a control system is necessary to control these lights in a specific manner. This traffic light control system can be achieved by using a microcontroller to make simple and low-cost system.

The main objective of this traffic light controller is to provide sophisticated control and coordination to confirm that traffic moves as smoothly and safely as possible. This project makes use of LED lights for indication purpose and a microcontroller is used for auto changing of signal at specified range of time interval. LED lights gets automatically turns on and off by making corresponding port pin of the microcontroller “HIGH”. 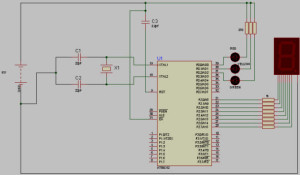 Working of the Traffic Light Controller

In the above circuit diagram of traffic light controller,a seven-segment display is used as a counter display, and three LEDs are used for the purpose of traffic light control. An 8051 Microcontroller is the brain of this whole project and is used to initiate the traffic signal at the intersections on road. This circuit diagram makes use of a crystal oscillator for generating frequency clock pulses. The LEDs are interfaced to the Port zero of the microcontroller and are powered with 5v power supply. Seven-segment display is connected to the port2 pins of the 8051 microcontroller with a common anode configuration.

The LEDs get automatically switched on and off by making the corresponding port pins of the microcontroller high, based on the 8051 microcontroller and its programming done by using KEIL software. At a particular period of time, only the green light holds ON and the other lights remains OFF, and after sometime, the changeover traffic light control from green to red takes place by making the succeeding change for glowing of yellow LED. This process continues as a cycle and the timing for changing the LEDs can be displayed with the use of a seven-segment LED display in this project.

This traffic light control system can be further enhanced in such a way to control the traffic signals automatically based on the traffic density on roads with the help of IR sensor modules with automatic turnoff if there are no vehicles on either side of the road which leads to power consumption. 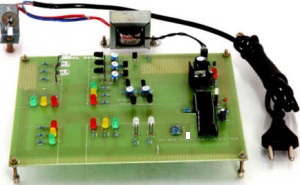 A prototype of traffic light control system is made by using Infra-Red sensors along with major components Microcontroller and LEDs which are used for controlling traffic signals based on the density of the traffic. The junction taken into consideration is a four-side junction with the traffic flow on each side is only in one direction. This traffic light control system consists of the following three main components:

Display Unit: It consists of 3 LEDs: Green, Red and Orange on each side of the junction– a total of 12 LEDs of three colors are placed at the junction.

Detector Unit: It consists of a combined arrangement of photo diode and IR LED at every junction for detecting the presence of vehicles based on the change in resistance.

Controller Unit:This control unit contains a microcontroller which receives the output data from the IR Sensors and controls the glowing of LEDs based on the programming.

The aim of this project is to design and develop a density based dynamic traffic signal system. The signal timing changes automatically by sensing the traffic density at every junction. 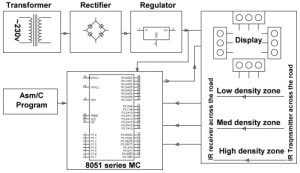 This proposed system makes use of an 8051 microcontroller which is properly interfaced with the IR sensors to change the junction timing automatically to accommodate the movement of vehicles for avoiding unnecessary waste of time at each junction.

The sensors used in this project IR and photo diodes are in line of sight configuration across the loads to detect the density at the traffic signal. The density of these vehicles is measured in three zones i.e., low, medium and high,respectively – based on certain time duration allotted at respective zones,accordingly.