You are here: Home / Electronics / What is a Heat Sink : Working and Its Applications

In recent years, various devices such as integrated circuits, personal computers having GPU units, IGBT, and semiconductor power devices unprecedentedly generates a large amount of heat. It came to know that the heat generation concentration from these devices is approaching a level matching that of nuclear reactors, which becomes almost difficult to dissipate such a heat rate. For that reason, there is a requirement for heat dissipation through heat sinks where these devices can efficiently dissipate heat levels. And the first heat sink was invented by Jeff Koplow which works on the principle of air bearing heat exchanger. So, let us understand more about the heat sink circuit, its working principle, what material is used for construction, and its advantages.

What is a Heat Sink?

The heat sink definition is stated as “It is an electronic component that absorbs and dissipates the unnecessary amount of heat generated from various electronic devices”. It is also termed a passive heat exchanger that transfers the heat generated from electronic devices to a fluid medium which is dissipated away from the devices thus maintaining the temperature of the devices at required levels. The heat sink devices are used together with high power devices like LEDs, and power transistors because the capability of heat dissipation of the component itself is not enough to regulate its temperature. 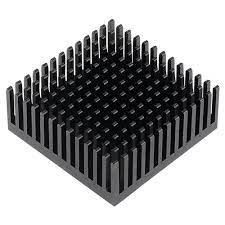 The dissipation of heat from electronic devices helps the circuits from preventing overheating, and early failure and enhances the quality and consistency of the components. The functionality of the heat sink depends on Fourier’s principle. As per the Fourier’s principle, when this is temperature incline in a component, then heat will be transferred from high to lower temperature areas and the heat transfer happens in three approaches which are radiation, convection and conduction.

When the fluid medium is water, then the heat sink is termed a cold plate. In the concept of thermodynamics, a heat sink is a reservoir that absorbs the required amount of heat showing no change in temperature levels. Based on Fourier’s principle, the amount of heat transfer through the conduction process is directly proportional to the product of temperature level and the area across which heat transfer takes place. It can be represented as follows:

For the heat sink in the duct when there is airflow across the duct, then the basement of the heat sink turns to be hot. When the energy conservational law is applied for steady-state circumstances, and newton’s principle of cooling is applied to the temperature, then the equations are given as:

As per the above equations,

cp,in corresponds to the heat capacity of the air that flows inside measured in J/(kg mcp,in C)

Rhs corresponds to the thermal resistance value of the heat sink

With respect to the above equations,

In the process of convection, it needs free airflow through the heat sink. When the fins the not aligned properly, then the heat sink’s efficiency gets reduced.

This is the working of the heat sink device.

To have a detailed understanding and practicality of heat sink working, let us consider the below circuit which is the heatsink temperature monitoring circuit. 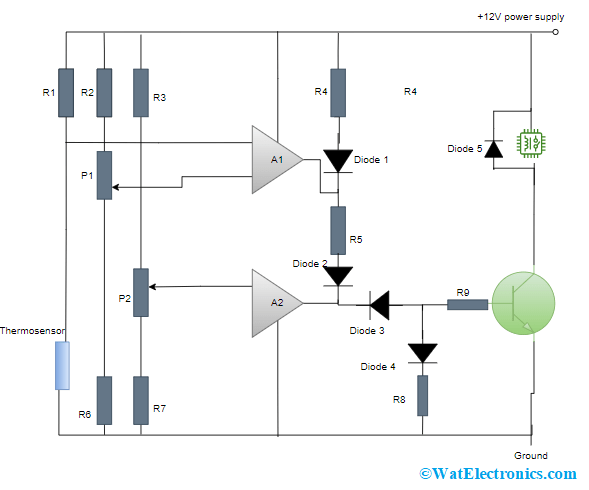 When the red LED lights up, a relay is triggered which indicates either to disrupt the power supply or to turn ON the cooling fan. The above circuit is designed using 2 operational amplifiers operating as window comparators. The input voltage to the device is supplied using a thermosensor IC, where the voltage enhances in a linear fashion by a rate of 10mV per degree of temperature. When the voltage level is less than P1 and P2 resistors (500Ω), then the output of operational amplifiers equals ‘0’ leading to the glowing of green LED.

Heat sinks are essentially used in the configurations of active, passive, and hybrid.

Active Heat Sinks – This type uses pressurized air to augment the fluid flow rate through the hot section. This pressurized air is generated using a blower or fan or with the movement of the total object.

For example, a fan in a PC gets turned ON when the device gets warm.

The fan circulates the air all through the heat sink allowing cooled air to flow across the surface of the heat sink so that it increases the thermal gradient value. This allows warmth heat to expel out of the system.

Active heat sinks exhibit high performance, whereas these are not employed for long period applications and are priced more, and has more movable components.

Passive Heat Sinks – This type of sink is dependent on the natural convention process which corresponds to the buoyancy rate of the hot air independently is responsible for the airflow generated through the heat sink. The benefit of the passive heat sink is it does not need secondary/external controlling systems to expel heat from the device. Whereas passive heat sinks exhibit poor performance when compared with active heat sinks, and also heat transmission ability is less.

Hybrid Heat Sinks – This type combines the properties of both active and passive heat sinks, but this type is not used in general. The hybrid type devices are frequently dependent on control systems to exhibit cooling properties depending on the temperature necessities.

When the device is functioning at cooler levels, then the pressurized air source turns to be inactive so there is a passive cooling system. When the source has increased temperature levels, then the active cooling apparatus involves to augment the heat sink’s cooling capacity.

The below tabular column explains different heat sink types along with their performance, benefits, and drawbacks.

There are many factors to be considered to improve the heat sink performance where few are discussed as below:

Good thermal interface substance – Using the good property of the thermal compound lowers the temperature value by many degrees. The thermal interface gets filled up in the smaller gaps thus increasing the heat conduction or exhibiting a good level of heat transfer to take place.

Mounting – When a strong mount is used, it increases the contact in between the heat sink and the chip thus showing efficient thermal exchange.

Here, the testing setup seems to be uncomplicated whereas a good quality testing apparatus is required.

In the second testing methodology, the heat sink is tested in a ducted area which allows the entire airflow to move across the heat sink. There will be no airflow all around the heat sink or evading the airflow.

This setup is easy to maintain and construct than that of the first method. The thermal resistance informed is usually offered by the seller for the assessed duct results. Whereas the tested results are optimistic and can deliver false results when set up in unducted environments.

This is testing of a dual heat sink which tests using two similar heat sinks with a heater placed in between both the devices. This procedure shows good results as there will be no heat exchange losses.

This is not a generally used testing approach as it consumes more time to test and also the velocity measurement is difficult when there is no efficient testing apparatus.

These are the main heat sink testing methods.

The crucial heat sink applications are as follows:

So, this is all on the concept of a heat sink. This article has provided detailed information on heat sink working, circuits, types, testing procedures, and applications. Know what are the design factors to be considered in designing a heat sink?

When a heat sink is not present in the system, the component which generated more heat has no path of dissipating. So, this results in an automatic shutdown of the system.

There are a few factors to be considered while choosing a heat sink which are: