We normally use a simple static LED display screen to convey a message. Earlier, when we want to display large data, we used to change message for every few instances. Now scrolling displays are more preferred to static. By using a pre programmed controller, we can make LED display in scrolling way. We can also make LED to adoptable by using PC controller based system. Simple Outdoor LED Message Moving or Scrolling Sign Board, Electronic projects using LED Scroller Generator for outdoor digital signs, Marketable LED sign board with Message scrolling are the examples of the scrolling LED display.

Let’s have a discussion about LED scrolling display with circuit diagrams. Scrolling LED display can be implemented in various methods. Two methods are widely in use, first one is decade counters and another one using shift registers. The shift register is easy to implement for beginners. Let’s discuss about LED using shift registers. Scrolling LED display panel is implemented by using microcontrollers like 8051, AVR and PIC micontroller. Here we discuss about implementing using 8051 microcontroller for simple electronic projects. 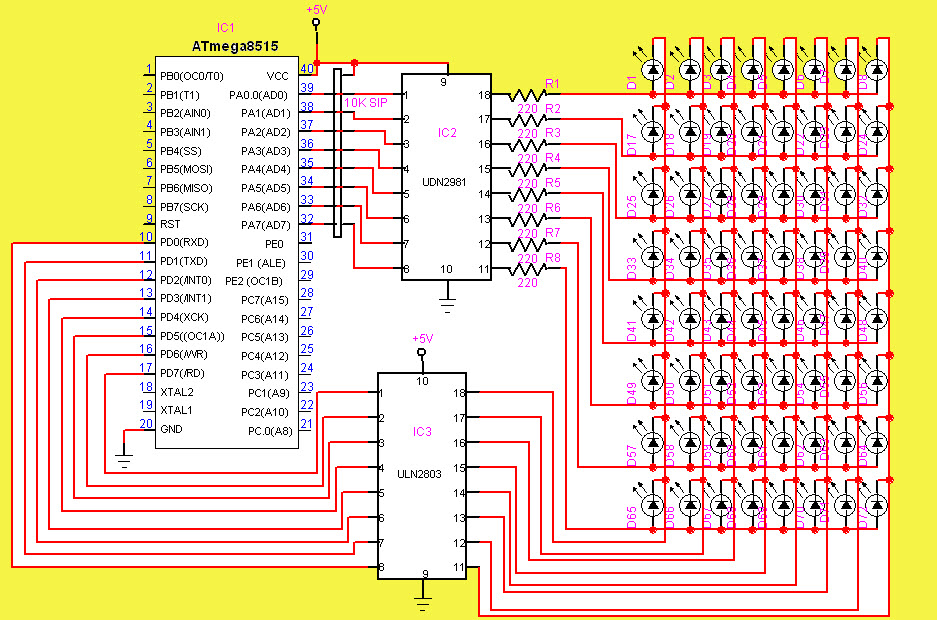 When we want to construct LED Dot Matrix, lets know about how to drive LED and which resistance is added to protect LED. LEDs are two types

High power LEDs are costly, so generally we use miniature LEDs in practical experiments. Generally a red color LED can be made ON by using 2 or 3 volts. If we want to make LED to glow more 20mA current to flow.

Below figure describes about how to make LED using the 5v supply. If we connect directly 5v supply to LED, it may get damaged. For that, we connect a resistor in series with the resistor. Current flowing through the LED scrolling sign can be described as load current. For better brightness 20mA is needed to glow LED, so load current is 20mA and LED takes 2v to turn ON. 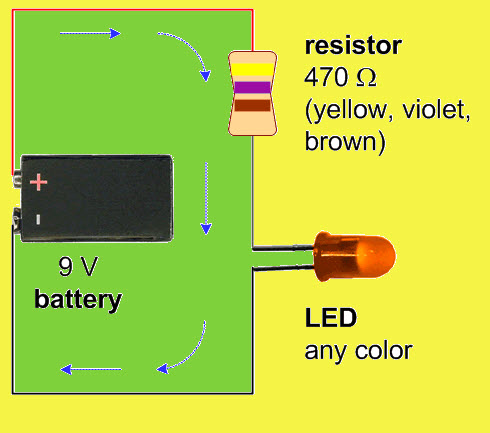 To construct an LED Array, entire cathodes are connected together and grounded. Each anode drives by the microcontroller. The microcontroller is programmed to generate different patterns on the LEDs. A total of 160mA current sinks into ground.

Using a single array of LED scrolling display board, we can generate different types of patterns. If we arrange the LED arrays side by side with multiplexing technique, it generates letters, symbols, numbers, pictures, animations also. This LED Dot Matrix can be constructed by connecting all the anode terminals of LED’s together in each row and all the cathode terminals are joined together in each column. 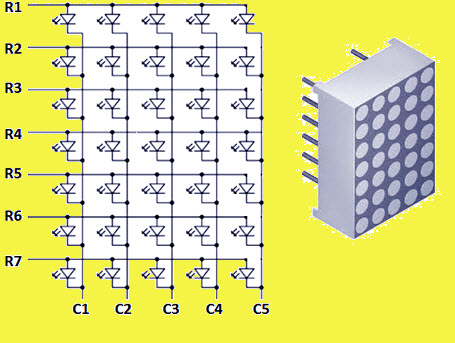 Anode Circuit in LED Scrolling Board

Some microcontrollers don’t have enough output voltage/currents to drive the rows of the LED scrolling display board. Hence, we need to place a transistor array or a latch between the led matrix and microcontroller. Usually for LED Scrolling board, the latch is enough to provide sufficient current. We can use 8-bit latch (74ls573). Each output of the 8-bit latch is able to provide current greater than 20mA, Which is enough to produce sufficient brightness to the LED. 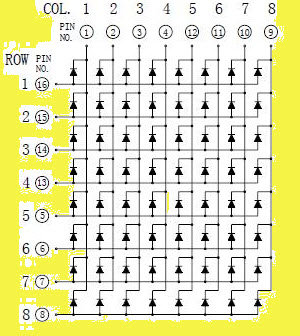 Anode Circuit in LED Scrolling Board 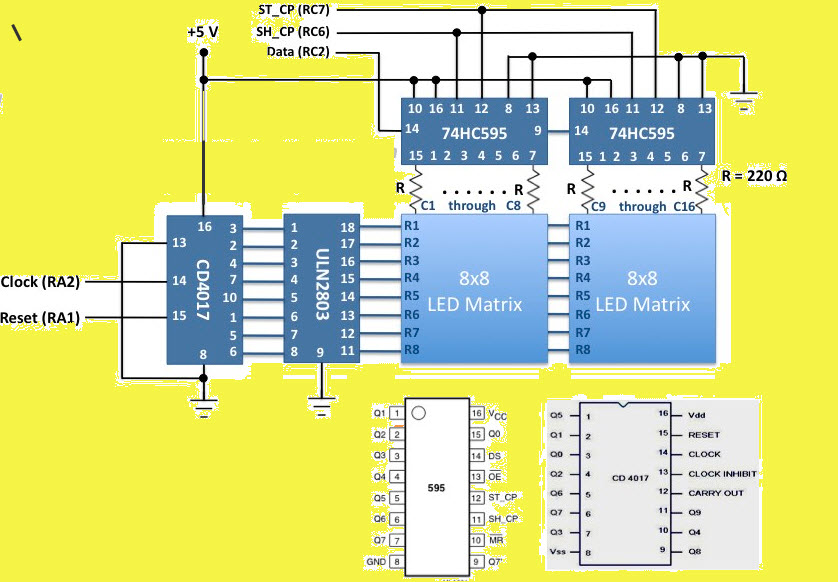 LED Matrix with a Microcontroller and Shift Register Data

Microcontroller provides the data and clock control signals to the shift register.  Microcontroller provides the data sequence to shift register data pin, the first column in LED matrix is connected to ground via ULN 2803 and the remaining other columns in the matrix are left unconnected. Hence  LEDs in that column will glow according to port data provided by the micro controller.

When the data sequence is provided to shift register, the next column LEDs will glow according to port data provided by the MCU. Next columns will drive one by one with the corresponding sequence given to the shift register.

A letter  displayed on the LED matrix module even though the individual column is enabled at a time. The entire letter should be refreshed at 24 times per second, so we can see flicker less image. As per Persistence of vision phenomenon, scientifically determined that a frame rate of less than 16 frames per second  causes the mind to see flashing images. So take refresh rate at 24 frames/Sec. One frame takes 1/24 Sec to scan all the columns in the matrix. So, 8 column takes 1/ (24*8) = 1.7msec to glow. So, our program should scan each column within 1.7msec, then only we can achieve a correct refresh rate using LED display software.

When we want higher refresh rate, time delay (1.7 msec) may be decreased to micro seconds.  Some microcontroller are not able to provide such small delays (ex: 8051), So we go for higher high speed microcontrollers such as PIC and AVR.

This project is used to display the information anywhere like colleges, shops, railway stations S and other places. The information is transmitted using a PC. 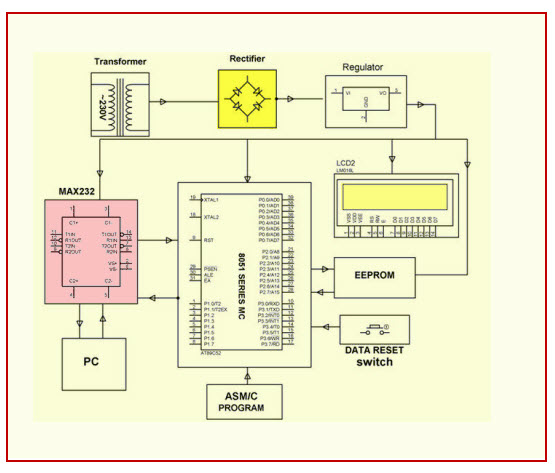 Traditionally notice board is all about sticking information, but sticking various notices day-to-day is a difficult process. A person is required separately to take care of this notice board. This system displays notices through a PC on notice boards. 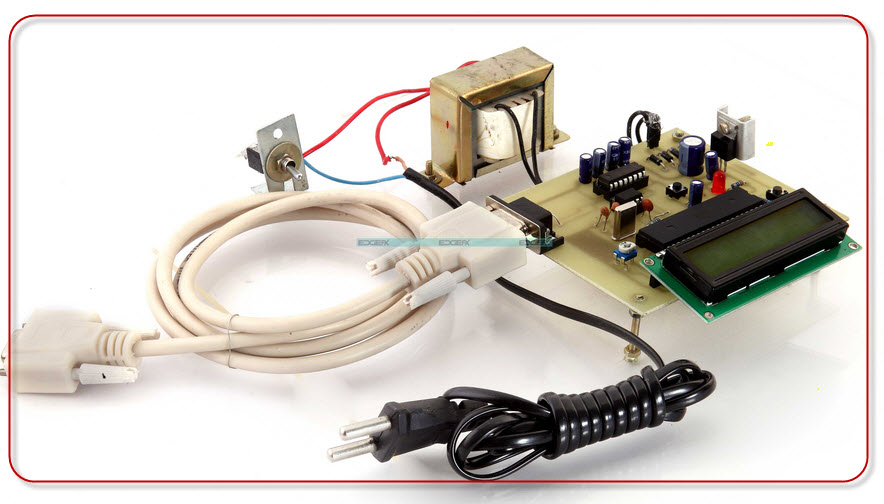 Please refer to this link to know more about Electronic Circuit Symbols.

Please refer to this link to know more about LED MCQs

Thus, this is all about scrolling LED display with an application. We believe that you might have got some fundamental concepts. Furthermore, any doubts regarding this topic or lab VIEW based electrical projects you can give your feedback by commenting in the comment section below.