You are here: Home / Components / What is Shunt Capacitor : Working & Its Advantages

Capacitors’ invention was initiated in the beginning days of electricity. In the initial days of development, capacitors were called condensers. This term was primarily utilized for the objective of high-power applications by Alessandro Volta in the year 1782. Thereafter, the term condenser was not in usage because of the complicated meaning of steam condenser and replaced by the name ‘capacitor’ in the year 1926. Now, this article provides a clear analysis of one foremost type of capacitor which is ‘shunt capacitor’, what is its working, advantages, and uses.

What is Shunt Capacitor?

In the scenario of electrical systems, the widely used component is capacitor bank. The power necessary to operate the entire electrical device is the load which is active power which is measured either in kilowatts or megawatts. The maximum amount of load that can be connected to the power system has inductive nature like electric furnaces, induction motors, and synchronous type of motors.

Due to these inductances, the system voltage stands ahead of the system current. When the lagging angle in between current and the voltage gets increased, there will be a reduction in the system’s power factor. When there is a decrement in the power factor for the same amount of active power, then the system receives more amount of current from the source which leads to losses. Whereas less amount of power factor leads to weak voltage regulation. 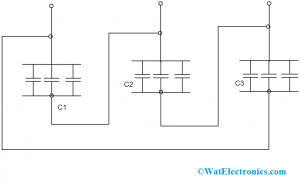 Here, ‘Q’ corresponds to the amount of necessary KVAR

With the above formula, one can know how to determine the rating of the required capacitor bank.

How to Connect Shunt Capacitor Bank?

Mostly, huge capacitor banks that are used in electrical substations are in the form of star arrangement. This type of connection shows some particular benefits like

Hypothetically, it was clear that the capacitor bank is always authorized to be close to the reactive load. This allows the communication of reactive type of KVARS is eliminated from the network. Additionally, when the load and the capacitor are concurrently connected, then at the time of disconnection, the capacitor is also removed from the circuit. So, there will be no compensation issues. Whereas when the connection is in the form where the capacitor connects with every separate load is not possible practically.

Because every load size has its own size and also varies based on consumers. Thus, because the size of the capacitor is not immediately available. So, accurate compensation is not feasible at every loading terminal. Also, there will be no continuous connection between the system and load. So, the connection that is between load and capacitor is not always completely used. 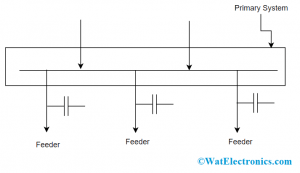 Therefore, only for medium and large loads the only capacitor is installed but not for minimal loads, capacitor bank can be used at the customer’s own locations. Even though inductive loads which are of medium and huge bulk customers are compensated, still there exists some VAR that is developed from various uncompensated minimal loads that have a connection with the system.

Furthermore, the transformer’s and line inductance values also drive VAR for the system. With all these complications, other than establishing a connection between load and capacitor, a huge capacitor bank is used at the location of the main distribution sub-station or else at the secondary grid located sub-station.

The advantages of shunt capacitor include the following.

Please refer to this link to know more about Capacitors MCQs

This is the detailed concept of a shunt capacitor. This article has explained clearly shunt capacitor rating, location, connection, and advantages. Also, know about the shunt capacitor applications and how they are used for various purposes?