You are here: Home / Electronics / What is Ferrite Bead : Types & Its Working

In various electronic circuits, ferrite bead inductors are used as an effective form of filter. A ferrite bead is made up of ferrite material in Halloween cylindrical shape. It is available in small sizes at affordable rates. It is also called a ferrite block, ferrite core or EMI filter, or ferrite choke or ferrite ring that is used to suppress high-frequency noise in the given electronic circuit. The properties of ferrite within the inductor might help to reduce EMI. The high permeability of ferrite core material helps to construct a perfect high-density inductor. This article gives a brief description of ferrite beads and their working in power supply.

What is Ferrite Bead?

The passive electronic device that is used to suppress signals at high frequencies on the power supply line is called a ferrite bead. For example, these are placed around a power line, which is incoming to a particular electronic device such as a power cable for the laptop.

The working principle of beads is based on Faraday’s law. At high-frequency signals, the back EMF is induced due to the magnetic core around the conductor and attenuates the particular frequency response of the ferrite. It is used as a passive low pass filter to dissipate RF energy in the form of heat. 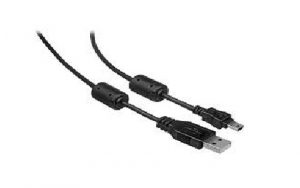 These are classified into two types based on the construction. They are,

These are used to attenuate over a wide range of frequencies at high magnitudes. This type of beads has higher current ratings and lower DCR (DC resistance).

This is a traditional type that provides limited attenuation and frequency range. These will get damaged if they operate above a certain DC. That is, the rate current value decreases with an increase in temperature. So the performance of this will get affected by heat.

The equivalent circuit of ferrite bead consists of an inductor and resistor connected in series as shown below.

What is the use of Ferrite Bead?

These are used to remove RF energy and operate effectively at a frequency range of several MHz – 1GHz. The ferrite bead uses are given below.

The ferrite bead is used to suppress EMI in two directions ie., to a device and from a device, which means ferrite bead is utilized to reduce EMI during the transmission of RF energy of the device through the cable. And also it prevents the EMI receiving from other devices and cable from acting as an antenna. This application is most commonly found in data cables and medical equipment.

It acts as a ferrite filter for suppression and elimination of conducted EMI. Hence it is also known as EMI filter bead, which is rated for a specific DC threshold current. The rated current decreases with an increase in temperature, which affects the impedance of the ferrite.

When the current is passed through the cable (laptop charger cable), then EMI is generated. The ferrite chokes or bead ensures that the incoming signals are transmitted only in the intended direction without any EMI between the peripheral devices.

Due to the damping capabilities of ferrite, the EMI waves are blocked by working as an EMI blocker. To ensure effective blocking of EMI, the bead is placed near the end of the cable (laptop charger). The advantage of laptop charger beads is to make sure that the peripherals of the computer work efficiently without causing any issues.

How to Select a Ferrite Bead?

To select a bead for a design, you need to know and observe the specifications of the bead. These are the right choice for the design to attenuate the EMI within the particular frequency range. Based on the inductive behavior, they are utilized to attenuate the high frequencies.

Since they don’t act as a wideband low pass filter but attenuate a particular frequency range. The selection of choke and bead depends on the undesired range of frequencies present in the resistive band. If the frequency goes too high or too low, then the bead will not work effectively.

Do you want to know how to select a bead for your design? Then you should know the characteristics of impedance vs load current, that is provided by the manufacturer. When the load current is high, then a selected bead should withstand without getting saturated and losing impedance within the particular and desired range of frequencies.

In any electronic circuit, a bypass capacitor is needed to be connected when the bead in the power supply line is used. These work as inductors at low frequencies and oppose the changes in current. For example, if an IC draws a spike of current, then the peak will be resisted by the bead and might lead to obstructions to the operation of the circuit.

Hence a bypass capacitor is needed to store the charge and provide those spikes of power. Filtering out of high frequencies will be started after connecting the capacitor and the ferrite bead. The advantages of using ferrite bead inductors are used as LC filters which produce steeper roll-off characteristics at low frequencies, providing inherent resistance with damping of LC resonance frequency.

How to Measure Ferrite Bead Value?

To obtain the value of this bead inductance from a given impedance value at the specific frequency, use the following formula,

For effective noise filtering in the power supply, the design specification of the bead is 20% of the rated DC current. For example, at 20% of bead inductance, the rated current drop is about 30% for the 6 A bead and 15% for the 3 A bead.

Thus, this is all about an overview of a ferrite bead– symbol, inductance, uses, selection for a design, use in power supply, laptop charger ferrite bead, for EMI suppression, and measure of its value. Here is a quest for you, “What are the advantages of ferrite bead? “