You are here: Home / Communications / What is Yagi Uda Antenna : Design, Working & Its Applications

Over a century ago two men independently invented the Yagi-Uda antenna. Ever heard of it? Neither had we before we started looking at the history of the invention. Invented in 1926 by Shintaro Uda of Tohoku Imperial University and Hidetsugu Yagi, Kiyoshi Kawakami, and other colleagues at the same university, it was the first antenna designed to exploit the advantage of receiving signals from multiple directions to cancel out noise or jamming with high gain, high directionality, and uninterrupted line of sight. The pair Yagi and Uda became to be known as “the fathers of the antennas”. This article clearly explains on basics of yagi uda antenna, its design considerations, components, and applications.

What is Yagi Uda Antenna?

Yagi Uda antenna is also termed as Yagi antenna which is a directional antenna that has either two or more parallel resonant antenna components acting as half-wave dipoles. This antenna is majorly formed by three components which are reflector, driven element, and directors, where the single driven component has a connection either with the transmitter/receiver via a transmission line or other parasitic components. In general, the parasitic elements are the reflector and a number of directors(longer element).

These parasitic elements(shorter elements)  are not electrically connected to the transmitter or receiver but instead act as passive resonators, working in conjunction with the driven element.

Yagi antennas are generally constructed to function in HF and UHF ranges and they provide the functional frequency between 30 MegaHertz to 3 GigaHertz, even when the bandwidth is very minimal. These antennas are uniquely designed to have good gain values which are more than 10dB.

There are mainly three basic components of  Yagi antenna which are: 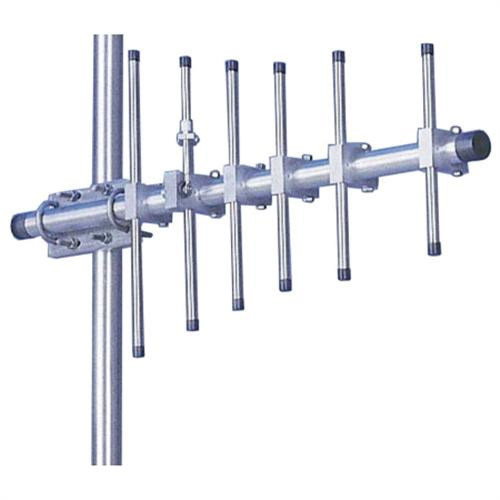 Driven element – The driven element provides the necessary current required for radiating electromagnetic energy into space and is usually the same length as a half wavelength at the intended operating frequency. All other elements are electrical multiples of half a wavelength long so that they resonate at the same frequency as the driven element. The extra length or multiple of half wavelengths is achieved by inserting an inductance or capacitance into each parasitic element, which has the effect of increasing their electrical length without changing their physical length.

Also, reflectors that are at the back of the driven element show no observable difference to the performance of the antenna. Whereas some designs employ reflectors with a reflecting plate or a sequence of parallel rods that resemble a reflecting plate. With this, there will be minimal increment in the device performance thus lessening the radiation level. Furthermore, this design pattern reduces the range of interference.

In general, a reflector adds approximately 4 – 5dB of gain in the forward path.

Mostly, there will be a gain of 1 dB across each director element in the forward path even though this level gets decreased when there are more directors.

The number of directors determines how many lobes appear on the radiation pattern of this antenna. The more lobes there are, the narrower they become, which means that they can focus on one particular direction.

This section explains the yagi uda antenna design and how it is operated. 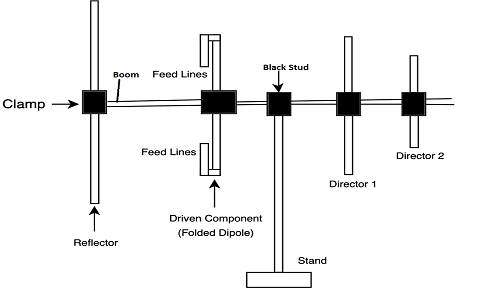 In the design of the Yagi antenna, the structure which is in the form of a center rod where the components are placed is termed a boom. The active component is called a driven component where a transmission line has an internal connection to it through a black stud. The single material which is at the back end of the driven component is called a reflector where it reflects the entire energy in the direction of the radiation pattern. And the other components that are present before the driven component are called directors which reflect the beam in the direction of the required angle.

In order to design a Yagi antenna, there are a few parameters to be considered which are:

When the above-mentioned design parameters of the yagi uda antenna are met, one can easily construct it. 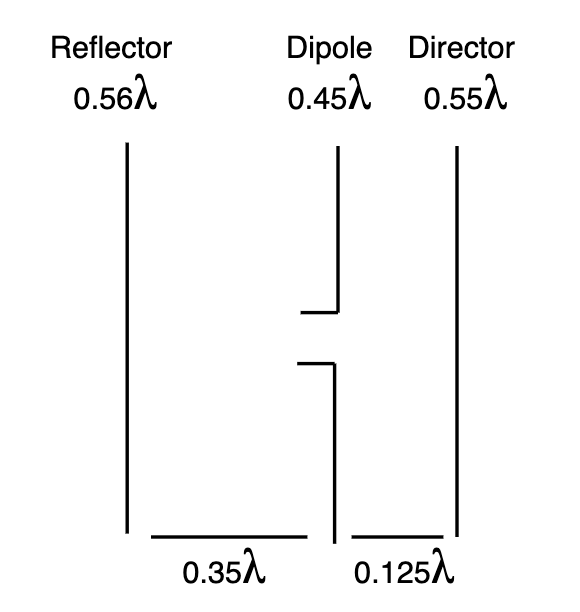 The yagi uda antenna design equations are as follows:

Before getting into the operation of the Yagi antenna let us see how an antenna works?

Antennas are the devices that receive and send signals. When the incoming signal reaches the input terminal of the antenna, an alternating current is produced across its terminals in response to the incoming waves. This alternating current is coupled with the input terminal of the receiver through a coaxial cable or waveguide. In short, the receiver antenna receives electromagnetic waves and converts them into electrical signals, while the transmitter antenna converts electrical signals into electromagnetic waves.

Antennas have various shapes and sizes, depending on the specific application. In a typical antenna design, the conductor is usually bent into one or more geometric shapes such as a horizontal dipole or a folded dipole.

In Yagi-Uda antenna is mostly a folded dipole antenna. When an extrinsic excitation is supplied to the dipole. The current flow across the active component creates a voltage across parasitic components which makes the flow of current across it.

On the whole, it is understood that excitation to driven components is supplied through feed lines which allow for radiation emission from the reflector in the direction of the director. Also, this radiation emission induces the parasitic components which again re-radiates the radiations. So, the component’s length and their spacing hold more prominence due to the reason that radiation emitted from every component gets added in the front path and then cancels the backward radiated wave.

The radiation pattern of the Yagi antenna is highly directive and it is shown below:

In this radiation pattern, the major lobe corresponds to the forward radiated wave and there are many minor lobes at the rear and sideways. The foremost minor lobe is the reverse one that happened by the radiation in the reflector’s direction.

There is a chance of antenna optimization so that it minimizes the radiation in the reverse path. This happens by varying the length and distance of the reflector or it can also be optimized to generate a high level of forwarding gain. But, there is no perfect coincidence for the above scenarios which makes a person compromise on the performance of the antenna based on the application. So, it is required to select either a high level of front-to-back ratio or else more forward gain.

This section explains the detailed characteristics and uses of the yagi antenna.

A few of the applications of the Yagi antenna are:

A yagi antenna is used to establish short-distance communication in the range of 3 to 5 miles between two ends.

In general, the frequency range of the yagi antenna is 3MHz to 300 GHz.

The main elements in the antenna are the director, reflector, and driven component (usually a folded dipole).

All the outdoor antennas are to be grounded.

Beverage antennas do not hold much efficiency and so transmission becomes so complicated.

It is the end-fire radiation pattern where the main lobe is in a parallel direction to the axis of antenna.

A yagi antenna is a directional antenna.