You are here: Home / Basics / What is Hall Effect : Working & Its Experiment

What is Hall Effect?

The current flow in the conductor results in the generation of the transverse force on the moving carriers that possess certain charges. Once the force is applied, the buildup is formed across the sides of the conductor. Hence, it results in the generation of the voltage. This effect is known as the Hall Effect because this voltage is responsible for the study of the current evolved in the conductors. This effect can be measured with the kind of sensors known as Hall Effect sensors.

The principle involved in the Hall Effect sensor is similar to that of the hall voltage. Let us consider a conductor with a thin strip and it is provided with the electric supply. Once the current is provided to the conductor, the charge flows in a straight direction in a line that is perpendicular to the direction of the magnetic field of the conductor.  In this way, some carriers like electrons will be gathered at one side of the field. 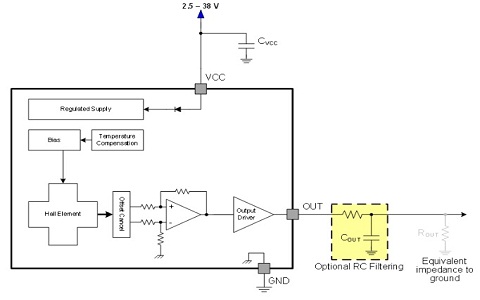 Now the conductor plane is partitioned in two ways. One side acts as positively charged and the other as negatively charged. Because of this difference in the potential, the voltage gets generated. This is referred to as the Hall voltage. Until the balance is obtained, the charge carriers tend to move from one side to another. This changes the value of the magnetic flux. Once the separation in the conductor stops the density value of the magnetic flux is obtained.  In this way, the Hall Effect sensor works.

Aim: To determine the value of the hall voltage.

When the current supply is provided to the conducting material and it is placed in between the solenoids that are present in the perpendicular direction of the magnetic fields. The voltage is generated because of the potential difference across the sides of the material. This voltage is known as the Hall voltage. This voltage is responsible to determine the type of material. 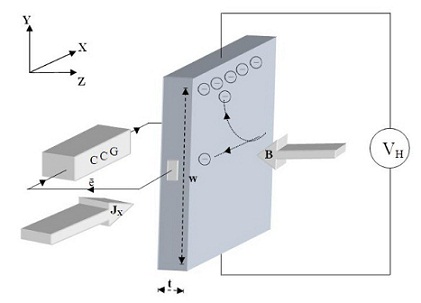 The equation that determines the hall voltage is

Where ‘I’ is current, ‘B’ represents the magnetic field and ‘t’ denotes the thickness of the material.

Here R H represents the coefficient of the Hall voltage.

Please refer to this link for Hall Effect MCQs

There are various applications of the Hall Effect. Some of them are listed as follows:

In this way, there are various applications involved in the device that performs the Hall Effect.

Generally, there exist two types of sensors based on the relation that exists between the density of the magnetic flux and the hall voltage, they are linear and threshold sensors. In these sensors, if the relation between the magnetic flux and the voltage generated at the output is linear, then the sensors are defined as linear sensors. But in the threshold sensors, for each value of the density of magnetic flux, there observed a decrease in the voltage generated at the output. Now can you describe which type of sensor is most widely preferred for digital electronic applications?