The necessity of the diffusion current in the semiconductor is because of the reason behind the dominating current at the junction. At the equilibrium condition, the net currents are zero because the forward current is balanced by the reverse drift current but inside the depletion region, both drift and diffusion currents are present.

What do you mean by Diffusion Current?

In this process of movement, there is some generation of the current. This type of current is referred to as Diffusion Current for the semiconductors. 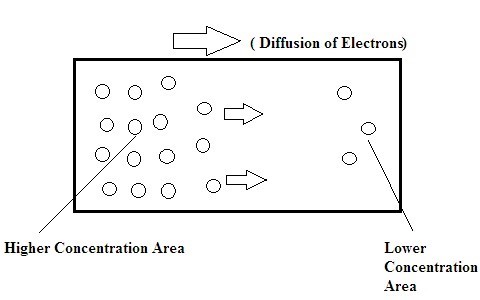 Similarly, the diffusion density because of the carrier concentration of holes can be written as

The above equation is for the densities of diffusion densities with respect to electrons and holes but the overall density of the current of respective holes or electrons can be given by the sum of the diffusion current and the drift current.

The overall diffusion density with respect to holes can be given by the equations for the individual densities of electrons as well as holes. Therefore the overall current density can be given by

In this way, the equations for the diffusion current densities are described for holes as well as electrons. The diffusion current in the semiconductor has occurred before the application of external supply. It is also termed as the process of recombination in order to achieve uniformity. But have you ever thought why the diffusion doesn’t take place in conductors?