You are here: Home / Communications / What is a Single Tuned Amplifier : Working & Its Applications

What is a Single Tuned Amplifier?

Definition: A tuned amplifier consists of a single tuning circuit at the load can be defined as a single tuned amplifier. It is a multi-stage amplifier, where each stage of this amplifier must be tuned with the same frequencies. For example, tuning a radio station. If the desired carrier wave is passed and matches the defined range of passband frequency, then the radio station is tuned otherwise it is blocked.

Single tuned amplifiers can be constructed using a BJT. The circuit of this amplifier consists of a transistor followed by the tuning circuit. If the considered transistor is of the common emitter in configuration then in such case, the output is collected from the coupling capacitor connected at the collector terminal. 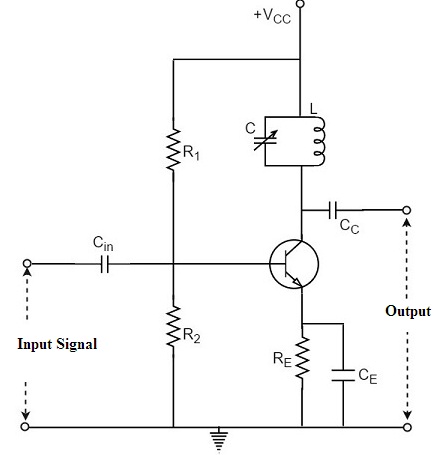 Therefore, the tuning circuit (load) is connected to the collector terminal. Each amplifier possesses a certain resonating frequency. The frequency that must be amplified and equal to the resonant frequency of this circuit.

The operation of the single tuned amplifiers undergo these following steps:

As the gain factor is dependent upon the impedance of the tuning circuit (Rac) that possesses ‘L’ and ‘C’ values in it.

The final equation for the amplifier gain is 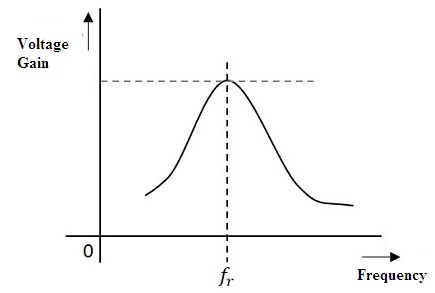 From the above graph, it is evident that the gain is maximum at the resonating frequency. So, the frequencies which equivalent to it will be allowed others are blocked.

Cascading Effect on the Bandwidth

The curves of response are plotted that shown in the above image. In that, there are slight increments and decrements in the signal at the central frequency. This range is defined as the bandwidth.

Bandwidth is a factor to determine the range in which the signals get amplified.

As it is a multi-stage amplifier, one stage of the amplifier’s output is given as input to the next sage. This process is known as cascading, used to increase the gain of the circuit.  But gain and bandwidth are inversely proportional to each other.

Due to cascading the voltage, gain tends to increase which results in the decrease of the bandwidth.

When the ‘n’ stages of this amplifier are cascaded, the gain of the amplifier corresponding to the system gain at the certain resonant frequency can be given as

For n- stages the equation can be converted to

The final equation of the gain can be equated to 1/√2 to conclude the 3-dB ranged frequencies of this tuning amplifier.

The fractional frequency of variation can be substituted as

After substitution, the equation can be re-written as

The final equation for the bandwidth of n stages is

Further, bandwidth of the single stage can be written as

Where ‘n’ denotes the number of stages of the tuned amplifier. By using this formula, we can find the value of bandwidth for any of the stages.

From the above values, it is clear that as the number of stages increases the bandwidth is supposed to decrease.

The advantages of the single tuned amplifiers are:

The above are some of the advantages of single tuned amplifiers but the main disadvantage is, its potential instability will be occurred due to the reduction of the bandwidth.

The applications of these amplifiers are

1). What is a single tuned circuit?

A circuit whose behavior is similar to the circuit which possesses a  single inductor and capacitor is referred to as a single tuned circuit.

2). What range of frequency is tuned amplifiers used?

Tuned amplifiers are used for the radio frequencies amplification and it is ranging from 20 Kilo Hertz to 300G Hertz.

3). Why are tuned circuits not used for low-frequency amplification?

The frequency of resonance and the value of the inductor and capacitor are inversely proportional to each other. So, it is obvious that for low-frequency signal amplification we need to use high values o inductors an capacitors. This makes the circuit expensive an bulky.

4). What is electronic tuning?

An electronic circuit is used to tune the desired frequency to resonant frequency is defined as electronic tuning.

Thus, a single tuned amplifier circuit uses a parallel tuning circuit to select and pass the desired range of frequencies. It is generally used as a ‘frequency receiver’. Special care must be taken during a multi-stage environment where each stage must be tuned with the same resonating frequency. Here is a question for you, What is the basic difference between the single tuned amplifier and the other tuned amplifiers?