You are here: Home / Basics / What is a Common Emitter Amplifier : Working and Its Characteristics

Common Emitter as an Amplifier is a configuration of the basic Bipolar Junction Transistor (BJT). As it consists of three basic terminals that are base, emitter and the collector but for the input and the output circuit connections it require minimum of four terminals. In order to overcome this drawback a terminal among those three terminals made common so that it behaves in common for both input and output circuitry connections.  When emitter is made common to both input and output then it becomes Common Emitter Transistor.

This is one among the three configurations of these terminals. This configuration is the most widely preferred one because it has both current and the voltage gains which produces the high power gain value. When it operates in between cut-off and the region of saturation the transistor is said to be working as switch. In order to make function as amplifier it must be operating in the region that is active.

What is a Common Emitter Amplifier?

A transistor in which the emitter terminal is made common for both the input and the output circuit connections is known as common emitter configuration. When this configuration is provided with the supply of the alternating current (AC) and  operated in between the both positive and the negative halves of the cycle in order to generate the specific output signal is known as common emitter amplifier.

In this type of configuration the input is applied at the terminal base and the considered output is to be collected across the terminal collector. By keeping emitter terminal is common in both the cases of input as well as output. 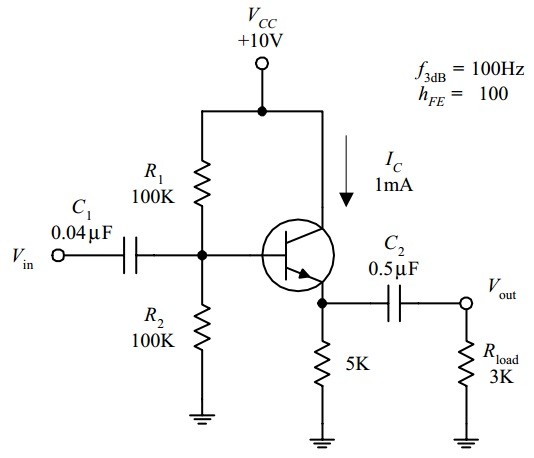 Other than this there are various electronic components are to be included in this circuit. One is the resistor R1 that is the one to make the transistor to function in the forward biasing mode. The R2 is responsible to make the biasing possible. There is the load resistor and the resistor that is connected at the emitter so that it controls the stability related to thermal issue.  The resistors R1 and R2 connected across the terminal base as it is the input side. The load resistor is connected at the output side that is across the collector terminal.

There are capacitors as well in the circuit. The capacitor C1 is at the input side and the capacitor C2 is connected across the emitter resistor. The C1 capacitor is responsible to separate the value of the AC signals from that of DC signals. There exists the inverse relation between the R1 resistor and the biasing. As R2 tends to increase the biasing tends to increase and vice-versa. Hence to the smaller or the weaker signals that are applied to the base gets amplified at the obtained output signals. Hence this is the reason it is known as CE amplifier.

Here the load resistance is the resistor connected across the collector. The ratio in between the output current to the applied input current gives the current gain. This is denoted as beta.

In this way the values of the voltage gain and the current gain are calculated for this amplifier configuration.

As the applied base voltage increases the voltage produced at the output tends to decrease and vice-versa. This is the reason of the circuit acting in an inverting manner.

The applications of this CE amplifier are as follows

The above are the some of the applications of the amplifier circuit. This configuration is simple in design while operating as switch it operates under cut-off and the saturating regions. But while operating as an amplifier there must be certain point in it that must be lying at the center of the active region. This point decides the output signal quality.

This is the basic model of the amplifier circuitry. This type of configuration is preferred in various circuits based on its efficiency of the signal amplification. Now after discussing all the details regards to common emitter configuration can you tell which configuration functions well as an amplifier?