You are here: Home / Electronics / What is a Virtual LAN : Architecture & Its Types

These days, the communication network has been implemented with the growing technology. The communication between the computer networks is achieved very easily by dividing the networks into Local Area Networks (LANs) and Wide Area Networks (WANs). When all the physical devices of the network are connected to each other within the same network using a switch link, then it is called LAN. It is mainly used for official purposes. Similarly when the various networks with logical workstations are working virtually on one LAN, then it is called Virtual LAN. This article gives an overview of Virtual LAN in computer networks.

What is a Virtual LAN?

Definition: Virtual LAN can be defined as, the network that contains logical workgroups, servers, and all other physical devices that are connected to each other to work virtually within the large physical network on one local area network using a switch or bridge irrespective of the location. It is generally called as VLAN (Virtual Area Network). It allows the users and computers to communicate with each other without any interruption because they work on a single LAN and multicasting and broadcasting domains are shared.

The virtual LAN in the computer networking can be implemented due to the various benefits which are discussed below,

VLAN is a computer network that is widely used to enable faster communication, greater scalability, improves network management, allows the users and computers to work and communicate within the same LAN irrespective of work location and servers. It is easy to divide LAN into the group of logical segments into various broadcasting domains.

The VLAN in computer networks removes the latency, Reduces the use of network devices, enhances the efficiency of the network, and resolves various security and management problems.

The network can be expanded and relocated easily at various work locations by configuring the routers and the network devices.

Regulates the traffic in the network and enhances performance.

Virtual LAN architecture can be understood easily from the LAN. 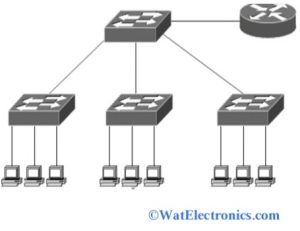 Virtual LAN technology is very simple, less expensive, and easy to modify and maintain. Ethernet VLAN technology with IEEE 802.1Q was introduced as the first edition in 2003. It allows the network administration, separates the network devices with the configuration of routers without any use of cables.

This technology is implemented by using high-end switches or routers or bridges to improve the functioning, performance, security of the network.

The network which contains small logical groups are combined within a single local area network and forms a separate network to share the broadcast domain and transfer the data between the users and the computers. This technology doesn’t depend on the location of the network.

The VLAN architecture and technology configuration is shown in the below figure.

The virtual LAN technology is divided into 3 types such as protocol VLAN, static VLAN, and dynamic VLAN.
Protocol-based VLAN: this type of VLAN is used to process and regulate the traffic of the network and specify the filtered parameters of untagged data packets. It is not applicable for IP-based networks and mainly used in multi-protocol networks.

This type of VLAN is the collection of ports of a broadcast domain with a switch link. It is also defined as a collection of all ports with traffic having subnet addresses of the same VLAN. Users in the network are grouped by a logical method to control the consumption of bandwidth and arranging users based on their necessity.

In this type, VLAN is assigned to a port by a switch with the help of user data like IP address and MAC address. It configures the VLAN dynamically when the systems are transferred from one port to another port using another switch.

The VLAN protocol and design are based on IEEE 802. 1Q, where IEEE 802.1 format is a group of multiplexed VLAN that supports VLAN multivendor. Other protocols like ISC (Cisco Inter-switch link) and VLT (Virtual LAN trunk) are also implemented on VLANs to carry the data of VLAN in a frame header of IEEE 802.10.

Spanning tree protocol (STP) creates loop-free network topology on each data link layer (layer 2) of the OSI model among the switch links. This type of virtual LAN protocol and design is used to minimize the total STP of similar network topologies or multi-instance STP (MISTP) and blocks the connections of loop propagations of data. It is mainly used when the breakdown occurs in another part of the network during the transmission of data packets through a selected switch or route.

The advantages of virtual LAN includes