Semiconductors formed with differently doped p-type and n-type material on a single crystal forms the basic electronic devices like diodes, transistors, etc. These have their own significance in the development of modern electronic systems. Basics of electronics are dependent on the characteristics of such components. The characteristics of voltage and current help to analyze the equipment better. This article discusses what is a dc load line and its significance.

What is a DC Load Line?

A circuit supplied with dc power as the external source of the circuit. There exist both alternating and direct currents in the circuit. The reactive components of the circuits are made zero and the straight line is drawn above the voltage-current characteristics curves. Hence these results in the formation of intersecting point referred to an operating point. The straight that is drawn for this purpose is defined as the DC load line.

For any non-linear circuitry, if the analyses of its characteristics curve were done it is based on voltage and current parameters. During this graphical analysis as the characteristic curve is plotted above that straight line is drawn. This straight line is termed as dc load line because at this point reactive components are zero.

This is the constraint applied to the non-linear element by the external circuit. Hence the characteristic curve and the straight line are dawn above each other so that they can intersect each other at a point. The intersection point formed in between is known as Q point. It is also referred to as the correct DC operating point.

DC Load Line of a Diode and Its Equation

DC load line for a non-linear device is drawn by making the reactive components as zero. Hence a diode is considered as a non-linear device and its voltage and current characteristics are exponentially related to each other. The formation of the intersection point for the characteristic curve and the straight line or dc-load line can be analyzed better by considering the example for the diode as in forward bias condition.

Analysis of the circuit is done by applying Kirchhoff’s voltage law (KVL). This law results in the formation of the final equation for the dc load line. Here the dc voltage is the biasing voltage of the circuit by keeping any further reactive components as zero. 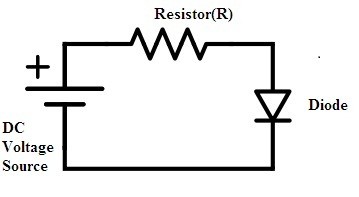 Once the Kirchhoff’s voltage law is applied to the circuit an equation is obtained for voltages and currents in the circuit.

After a certain cut-off voltage, the diode starts operating in forward bias condition. To this slope, the technique is considered and a straight line on the v-i characteristics is drawn. The slope here for the above general circuit for the diode is VDD/R. Then the intersection of the lines results in the formation of diode operating point as already discussed. 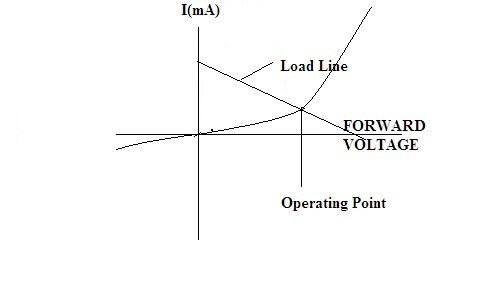 Once the characteristics curve is formed the slope is identified then with respect to that line is drawn. Everything is graphical here. In this way, the analysis for this is done in the above article. The main purpose of the analysis of the dc load line is that operating point is formed that is accurate in all terms and helpful for the further processing of the circuit. But for the overall analysis of the circuit Kirchhoff’s laws play a major role.