You are here: Home / Electronics / What is Reciprocity Theorem : Theory & Its Verification

Since the analysis of circuits is done by using Kirchhoff’s laws and Ohm’s, which leads to long system equations and it is difficult to determine the particular unknown components like the voltage, current, resistance in the circuit. Hence to determine the particular source and response of the entire network/circuit, the network theorems are utilized, which requires simple mathematics for analysis and to find the solution.

What is Reciprocity Theorem?

If the positions of the voltage source and ammeter are interchanged, then the output response indicated by the ammeter remains the same in both cases. That means, the reciprocity property exists in the circuit and it is called the reciprocity circuit that obeys the reciprocity theorem. The output response of the ammeter indicates the current flowing through the circuit. In special cases, it is referred to as Rayleigh Carson reciprocity, which was named after the work done by Hendrik Lorentz in 1896. This theorem is applicable for only single-source networks, not multi-source networks.

This reciprocity theorem statement is employed in linear and bilateral networks, in which the circuit consists of only one independent source. It is used for both DC and AC circuits. In other words, the reciprocity theorem statement is nothing but, when the positions of the voltage and current sources of any network are interchanged, then the same or equal magnitude or amount of voltage and current flows through the network or circuit.

The procedure required to solve the circuit/network using the reciprocity theorem is given below.

To solve the circuit or network with the help of the reciprocity theorem, the circuit must be linear with connected resistors, inductors, capacitors, and coupled circuits. The circuit with reciprocity property doesn’t contain any time-varying components. The internal resistance of the voltage source and the current source is zero because they are ideal.

In the reciprocity theorem, experiment, in any linear and bilateral network, the impedance (ratio of the applied voltage between the two terminals and current measured in the branch) in any branch is identical to the ratio of voltage (V) to current (I) obtained by interchanging the positions of ammeter (for current measurement) and voltage source.

The ratio of voltage to current is called transfer impedance. The voltage source and ammeter must have zero impedance. Because the reciprocity theorem is applicable only when they have the same internal impedances.

Consider an antenna system with the 4-terminal network, which consists of one pair of input terminals and another pair of output terminals as shown in the figure below. It is also referred to as 2- port network. 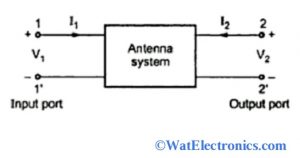 Where Z12 and Z21 are the mutual impedances, which are individual ratios of open circuit Voltage at one terminal and the measured current at another terminal.

Y12 and Y21 are transfer admittances, which are individual ratios of short circuit current at one terminal to the voltage at another terminal.

Z12′ and Z21′ are the transfer impedances, which are individual ratios of open-circuit voltage and short circuit current.

Proof: consider the network given below to find the response I2 with a voltage source E. 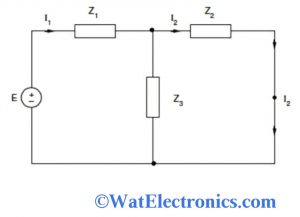 Case 2: Consider the network is shown below, where the positions of the voltage source and the output response I of the network interchanged. 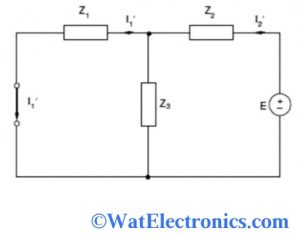 Reciprocity theorem is widely used in transmitting antenna and receiving antenna to derive various properties like,

When the transmitting antenna transmits the signals to the receiving antenna, the radiation patterns of both antennas will be equal.

These properties don’t change even though the antenna is operated in either receive mode or transmit mode. Hence the reciprocity theorem in antennas is applicable.

Application of Reciprocity Theorem in Antenna

The transmitting antenna’s directional pattern is represented with polar characteristics (amplitude and direction) because the strength of the radiated field is indicated at a fixed distance in various directions in the space. Since the strength of the antenna indicates amplitude. Similarly, the receiving antenna’s directional pattern is represented as polar characteristics. The response of the antenna from different directions for unit field strength is indicated by the receiving antenna.

When the antenna is operated as a transmitting antenna, its directional pattern is measured by placing the test antenna at the center of the sphere. The small dipole antenna is also considered during the measurement, and it is moved along the surface of the sphere as shown in the figure below. 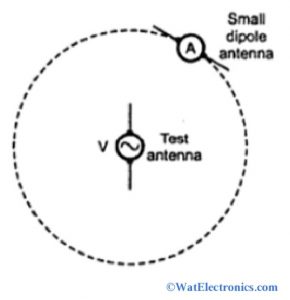 Application of Reciprocity Theorem in Antenna

A voltage source V is connected to the test antenna and the current flowing in the dipole antenna at different positions is measured using an ammeter. The current in the dipole antenna is nothing but the electric field at different positions. Observe the pattern of the transmitting antenna (test antenna). Now with the application of reciprocity theorem in antenna, interchange the positions of voltage V and the current measurement.

According to the reciprocity theorem in the antenna, for every position of the dipole antenna, the voltage (V) to current (I) ratio is the same as before, which is equal to the value obtained in the test antenna as the transmitting antenna. Therefore it is proved that on the application of reciprocity theorem in antenna, the radiation pattern or directional pattern of a transmitting antenna is identical to that of the receiving antenna.

When linear polarization is considered instead of circular polarization, the orientation of the dipole antenna is in such a way that is parallel to the electric vector and perpendicular to the radius vector.