You are here: Home / Digital Electronics / Different Types of Encoder and Decoder and Its Uses

In digital electronic projects, the encoder and decoder play an important role. It is used to convert the data from one form to another form. Generally, these are frequently used in the communication systems like telecommunication, networking, and transfer the data from one end to the other end. In the same way, it is also used in the digital domain for easy transmission of data, placed with the codes, and then transmitted. At the end of the receiver, the coded data are collected from the code and then processed to display. This article discusses what is encoder and encoder, working and their applications.

What are Encoder and Decoder?

The encoder is a device or a transducer or a circuit. The encoder will convert the information from one format to another format i.e like electrical signals to counters or a PLC. The feedback signal of the encoder will determine the position, count, speed, and direction. The control devices are used to send the command to a particular function. 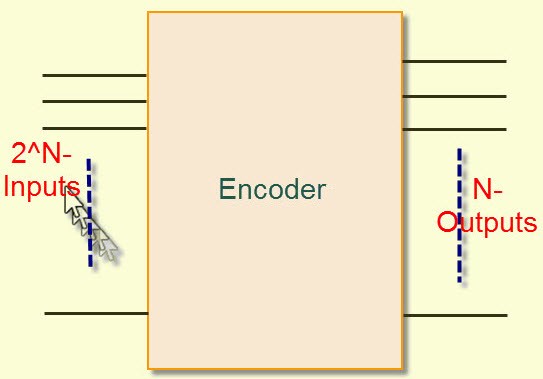 The decoder is a circuit used to change the code into a set of signals. The name its self tells the decoder because it has the reverse of encoding. The decoders are very simple to design. 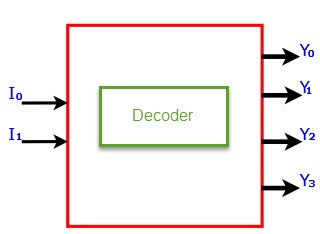 To create the signal in the encoders there are different types of technologies which include mechanical, magnetic, resistance, and optical is a most common. By using the interruption of light in the optical sensing the encoders will give feedback. The following diagram shows the basic structure of the incremental encoder by using optical technology. 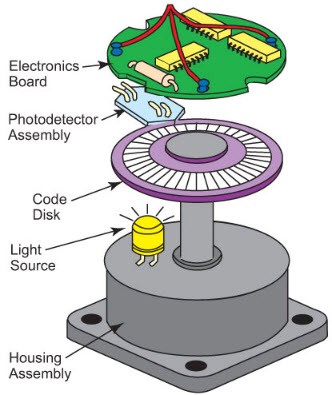 The light emitted from the LED will pass through the disk code, which is with the opaque lines. If the encoder shaft starts rotating the light beam of the LED is interrupted by the opaque lines on the code disk. This will give the pulse signals and the light is present then is in ON state & if there is no light then the light is in the ON state. The signals are sent to the counters or controller and then send the signals to construct the desired function.

Truth Table  of the Encoder

The decoders and encoders are designed with logic gates such as an OR-gate. There are different types of encoders and decoders like 4, 8, and 16 encoders and the truth table of encoders depends upon a particular encoder chosen by the user. 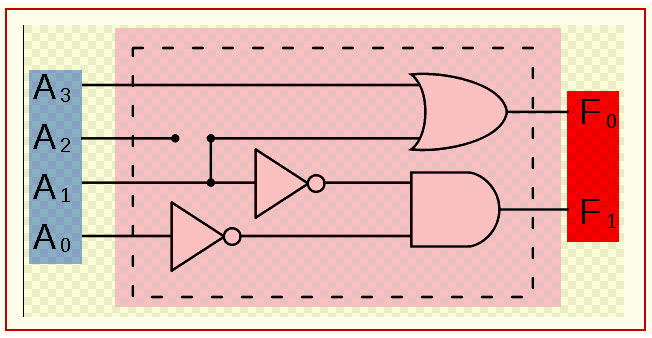 Here, a 4-bit encoder is being explained along with the truth table. The four-bit encoder allows only four inputs such as A0, A1, A2, A3 and generates the two outputs F0, F1, as shown below diagram. 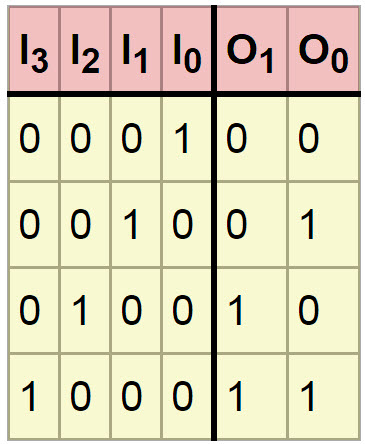 Types of  Encoder and Decoder

The encoder and decoder are used in many electronics projects to compress the multiple numbers of inputs into a smaller number of outputs. The encoder allows 2 power N inputs and generates an N-number of outputs. For example, in 4-2 encoders, if we give 4 inputs it produces only 2 outputs. 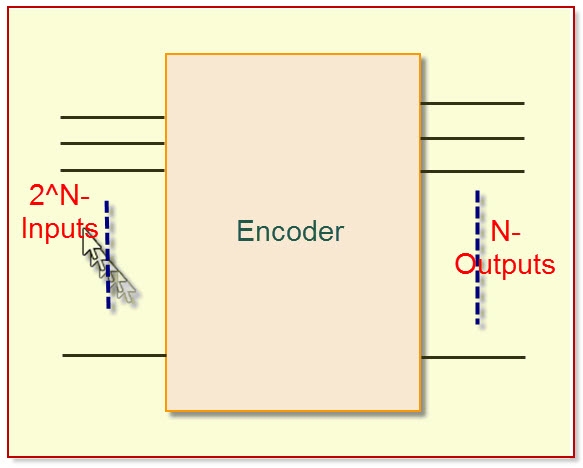 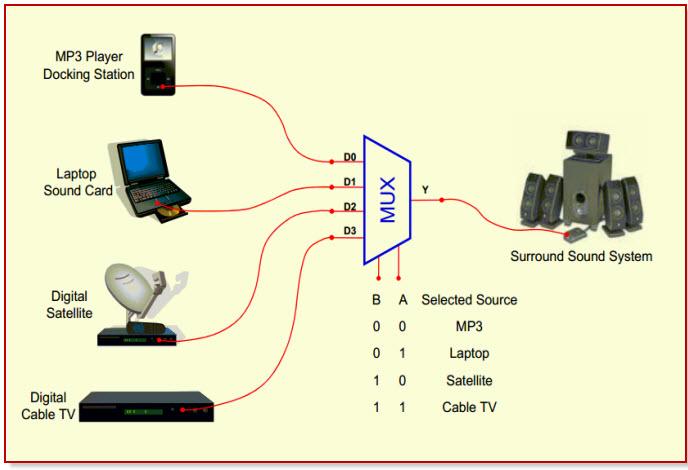 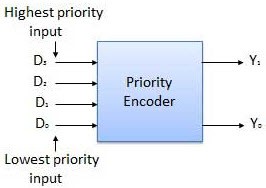 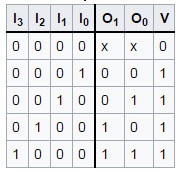 Truth Table of 4-to-2 Encoder

Logic Circuit of 2-to-4 Decoder

The decoder is an electronic device that is used to convert a digital signal to an analog signal. It allows a single input line and produces multiple output lines.  The decoders are used in many communication projects that are used to communicate between two devices. The decoder allows N- inputs and generates 2 power N-numbers of outputs. For example, if we give 2 inputs that will produce 4 outputs by using 4 by 2 decoders. 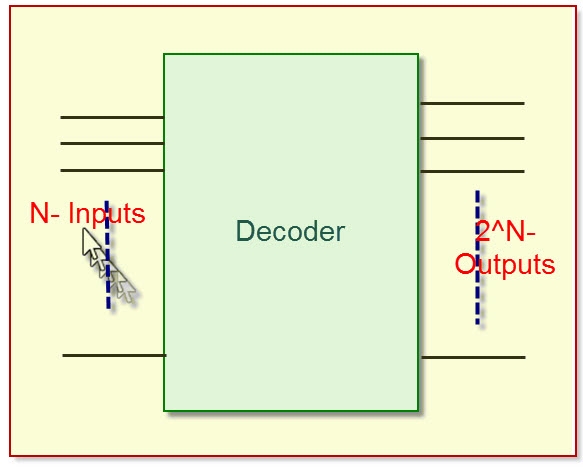 Truth Table of the Decoder

The encoders and decoders are designed with logic gates such as AND gates. There are different types of decoders like 4, 8, and 16 decoders and the truth table of decoder depends upon a particular decoder chosen by the user.  The subsequent description is about a 4-bit decoder and its truth table.

The four-bit decoder allows only four outputs such as A0, A1, A2, A3 and generates two outputs F0, F1, as shown in the below diagram. 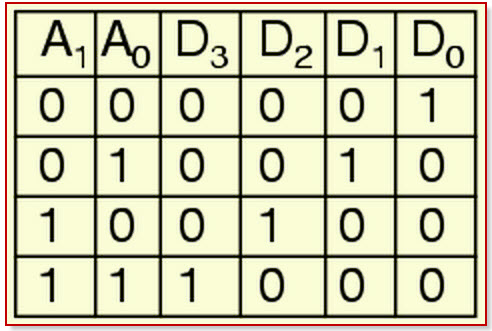 The below table shows the decoding of the 3 lines to 8 line decoder. To design this type of decoder we need active high output and for the given input combination the decoder output is one. The table shows an illustration of the decoding and also a logic symbol of 3 to 8 decoders. 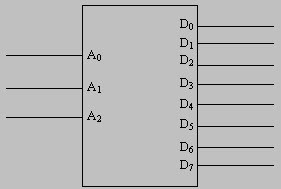 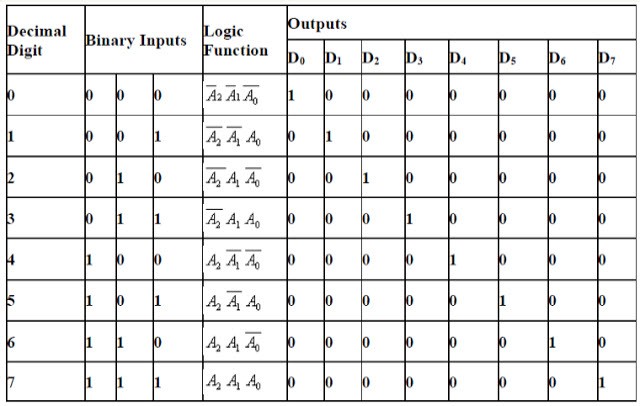 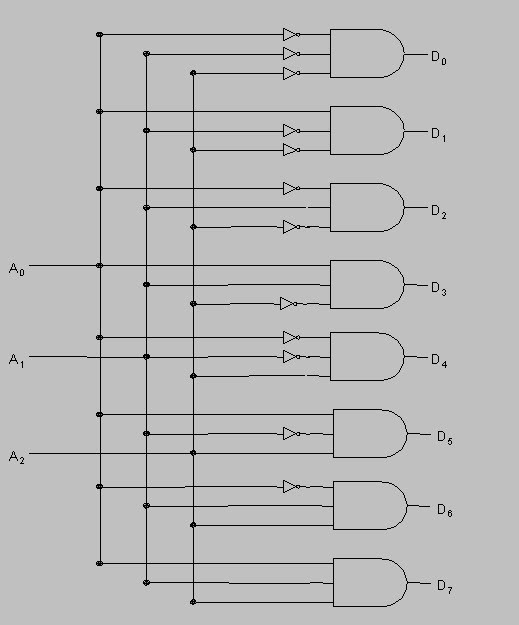 Logic Circuit of 3-to-8 Decoder 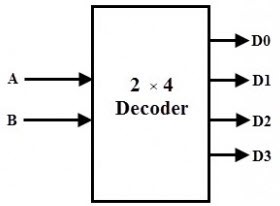 The truth table of the two input lines to four output line decoders can be observed in the following. If the enable pins are active high, then for a given input the outputs from Y0 to Y3 are logic 1. When the two inputs are low, then the output of Y0 is logic 1 and the other outputs are logic 0.

Truth Table of 2-to-4 Decoder

From the truth table the Boolean expressions of each output

By using the above equation, we can implement the logic circuit design of the two-line inputs of the four-line output. In this logic circuit, there are two NOT gates and four AND gates are used. The four enable pins are connected together and if the enable pin is zero, then all the outputs are zero.

If the enable pin is one, then the output depends on the product of the two inputs. In this, we have designed the logic circuit with the AND gate, but we can also implement it with the NAND gates by using the principle of minters. 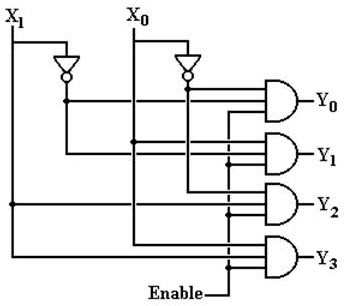 Some decoders are constructed with NAND rather than AND gates.  In this case, all decoder outputs will be 1’s except the one corresponding to the input code which will be 0. 2-to-4 line decoder with an enable input constructed with NAND gates. The circuit operates with complemented outputs and enables input E’, which is also complemented to match the outputs of the decoder NAND gate.

Applications Of Encoder and Decoder

The applications of types of encoder and decoder include the following

This system is used to synchronize motor speed by using RF technology. This project is applicable to many industries like steel plants, paper plants, and textile mills, where the motors are used to design simultaneously. All these motors used on conveyers are designed to be synchronized. 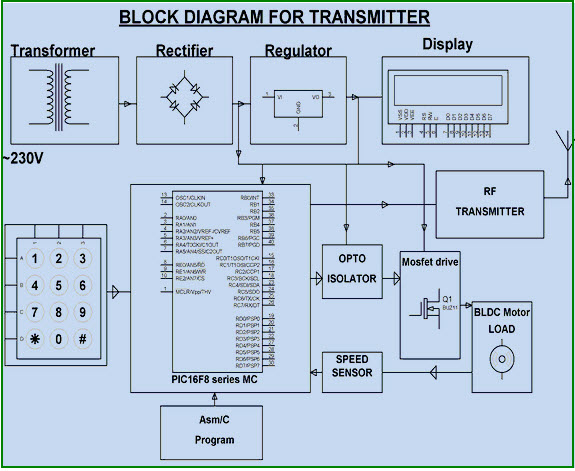 In this system, one motor output is given as the reference speed for the other motors to follow the same speed. The proposed system consists of two blocks: transmitter and receiver blocks, which are built with an encoder and decoder.

A particular speed is sent by the transmitter with the help of the decoder. The receiver receives the data and converts the digital format to send the receiver system, and maintains the same speed as it has received. Thus, if a particular speed is set by the transmitter, then other motors run with the same speed by utilizing radio-frequency communication.

This system with a wireless camera can wirelessly transmit a real-time video with night vision capabilities using RF technology, which is for remote operation. This kind of robot can be helpful for spying in War fields. 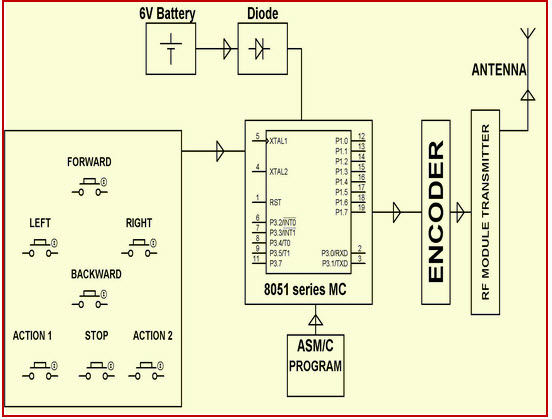 In the transmitting end pushbuttons are used; commands are sent to the controller for controlling the movement of the robot either in forward, backward, left, right, directions.

The RF transmitter acts as an RF remote control that has the advantage of adequate range (up to 200 meters) with a proper antenna, while the receiver decodes before feeding it to another microcontroller to drive DC motors via motor driver IC for necessary work. A wireless camera is mounted on the robot body for spying purposes, even in complete darkness by using infrared lighting. The basic schematic diagram is shown above.

The project is designed to develop a robotic vehicle that can sense metals ahead of it on its path similar to sensing land mines. The robot is controlled by a remote using RF technology. At the transmitting end, using push buttons, commands are sent to the receiver to control the movement of the robot either in forward, backward, and left or right directions. At the receiving end, two motors are interfaced to the microcontroller where they are used for the movement of the vehicle.

The RF transmitter acts as an RF remote control that has the advantage of adequate range (up to 200 meters) with a proper antenna, while the receiver decodes before feeding it to another microcontroller to drive DC motors via motor driver IC for necessary work. 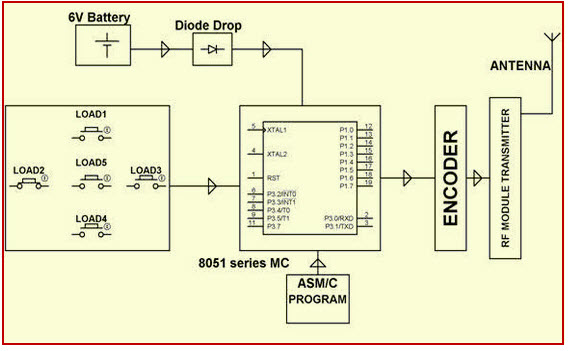 The RF transmitter acts as an RF remote control that has the advantage of adequate range (up to 200 meters) with a proper antenna, while the receiver decodes before feeding it to another microcontroller to drive DC motors via motor driver IC for necessary work.

The main goal of this project is to develop a home automation system with an RF- controlled remote. As technology is advancing so houses are also getting smarter. Modern houses are gradually shifting from conventional switches to a centralized control system, involving RF-controlled switches. 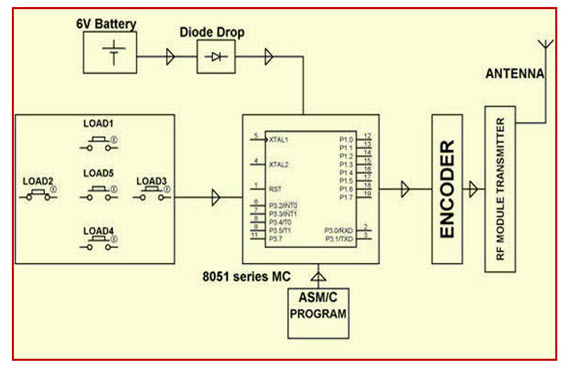 Presently, conventional wall switches located in different parts of the house make it difficult for the user to approach them for operations. Furthermore, it becomes more & more difficult for the elderly or physically handicapped people to do so. Remote controlled home automation system provides a simpler solution with RF technology.

In this project, a wireless communication system is designed and developed for remote patient monitoring. The primary function of this system is to monitor the temperature of a patient’s body and display the same to the doctor through RF communication. It is a very tedious method.

In this proposed system, a transmitting module continuously reads the patient’s body temperature through a digital temperature sensor; displays it on the LCD screen, and sends it to the microcontroller, which then transmits the encoded serial data over the air by RF (radio frequency) through an RF module. 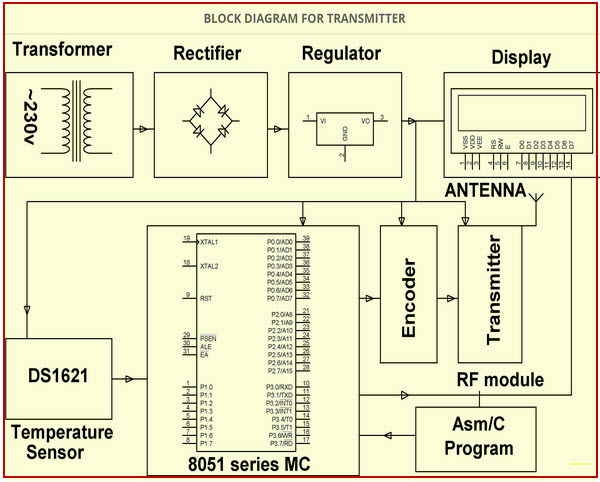 The project is designed to send secure messages by using a secret code from a computer keyboard connected to the transmitting unit via RF technology. The message is retrieved at the receiver end only upon entering the secret code used by the transmitter. Thus, complete secrecy is maintained in this communication process. This project has a unique feature of tagging the message with a secret code as selected by the sender. 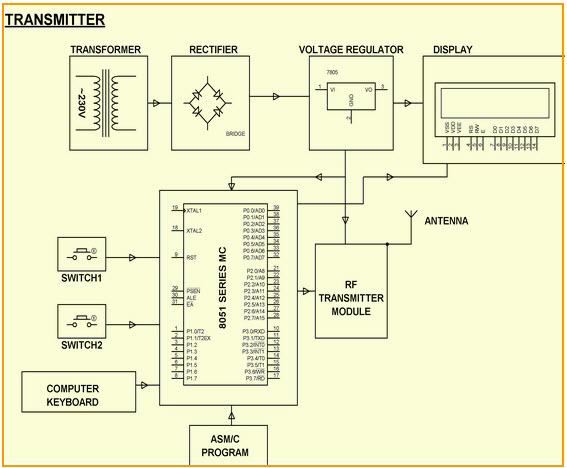