You are here: Home / Basics / What is Darlington Transistor : Working and Its Applications

The output of the transistor is given to the second transistor as input. So that it can be used in those fields where it is the higher necessity of amplification is required. These transistors provide the resultant value with the gain at it its highest. The input currents applied at the lower values but output gain is produced to be high.

What is Darlington Transistor?

The combination of the transistors either P-N-P or N-P-N of BJT type connected in order to form a pair is known as Darlington Transistor. This pair of transistors is efficient in terms of gain. The interconnection between the pair provides the current produced at the emitter terminal acts as the input current for the terminal base of the next transistor. Hence this pair is also referred to as “Super-Alpha Circuit”.

A bipolar junction transistor (BJT) can provide the current gain but when considered during amplifications it requires more amount of current gain. Hence the formation of the Darlington pair proven to be much useful in such cases. As the sufficient value of the current is supplied at the terminal base such that it plays a major role in the flow of the current from the collector. This indicates that BJT is entered in the saturation mode. This output is connected to the next transistor and further process continues.

The BJT is known for its characteristics of switching the devices ON and OFF. Whether it is P-N-P‘s configuration or the N-P-N’s configuration the follow up is same towards the applications.

This symbol consists of pair of either N-P-N or P-N-P transistors interconnected. 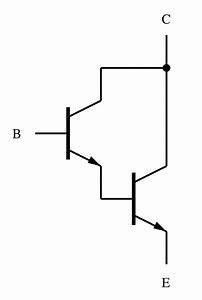 The applications of these transistors are

The above are the some of the applications of the Darlington pair of transistors.

The pair of transistors N-P-N is connected and these are useful as a switch for a lamp. This lamp operates at 10V 50W. By neglecting the drops at the voltages the gain at the connected first transistor is to be 30. The current gain at the second transistor is at 60.then find the value of the current at the terminal base?

Sol: Now the current generated at the collector = the current required to switch on the lamp.

Therefore after substitution the current at the base is

Hence from the above problem it can be concluded that for the small amount of the currents formed at the base a lamp with 50 watts can be made to switch ON and as well as OFF.

In case if the two transistors that are used is of some bipolar type configuration then the current gain value of both the transistors is considered to be equal.

A Darlington transistor consists of minimum value of the voltage drop in between the terminals of the emitter and the base. The respective base terminal present in this pair is sensitive in a manner that any changes at the input it gets responded. But overall drop is the combination of the individual transistors.

The resultant value of the voltage drop is incremented in such a way that a heat sink must be provided for the purpose of cooling. This pair of Darlington is sensitive for the temperature changes, voltage drop is at its maximum and the terminal base gets affected due to the input changes. In order to overcome this type of situation a transistor pair known as Sziklai has been introduced.

This pair is named after the inventor called George Sziklai from Hungary. This is formed by the combination of the BJT transistors that complements each other. That is if in the pair is one P-N-P transistor is present the other is N-P-N and vice-versa. The combination leads to the slower response times as usual they are present in the Darlington pair. But the minimum value required is of about 0.6 volts in order to turn ON the device. The gain value is further the combination of the complementary values of the respective transistors. 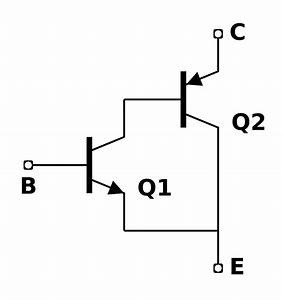 But can you tell which one is preferred during amplification and switching of the devices. Which is the better one among Darlington and Sziklai pair configurations?