You are here: Home / Digital Electronics / What is NOR Gate : Working & Its Applications

Digital logic, the most prominent term which we are aware of today required the cooperation and support of hundreds and thousands of people over many years and decades. Before the invention of electronic devices, mathematicians were inadvertently developing binary logic and laying the basis for current-day computing equipment. These approaches were later employed for the same kind of communication systems such as Morse code and binary. In order to automate the mechanical devices, Charles Babbage and George Boole applied these approaches. Later with many innovations and inventions, logic gates were developed which were in use today on a prominent basis. This article helps us in understanding the concepts of NOR gate definition, circuit, design, applications, and its advantages.

What is NOR Gate?

The NOR gate Boolean expression is given by:

The NOR gate symbol is shown as follows: 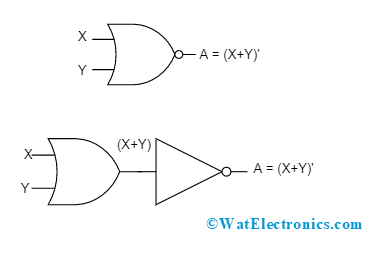 There are basically three types of NOR logic gates depending on the number of inputs. Those are explained below:

Here, the gate accepts two inputs and gives a single output which is the basic form of NOR gate. Here, the total possible combinations of inputs are 4. The 2-input Negated OR gate truth table is shown below:

Here, the gate accepts three inputs and gives single output. Here, the total possible combinations of inputs are 8. This three-input NOR logic gate can be formed by combining any number of individual inputs

The 3-input NOR gate truth table and logical design is shown below:

Similar to multi-input OR and AND gates, an n-input NOR-gate can also be formed. When the number of inputs is odd, the unused input signal is kept LOW by connecting this unused signal to the power supply through pull-up resistors.

Below is the logical expression and NOR gate design for 4-input NOR.

As it is already discussed NOR is a universal gate. This makes it more flexible that, any basic logic gate can be derived using a NOT OR gate. The below section explains on NOR gate using basic gates.

AND using Negated OR

When the inputs are considered as X and Y, then for an AND gate, the desired output is X.Y. So, the below Boolean expression shows the derivation of NOR gate using and gates.

AND Using NOT OR Gate

OR using Negated OR

When the inputs are considered as X and Y, then for an OR gate, the desired output is X + Y. So, this Boolean expression is derived using NOR logic gate.

OR Using NOT OR Gate

NOT using Negated OR

When the input is considered as X, then for a NOT gate, the desired output is X’. So, this Boolean expression is derived using NOR logic gate.

NOT Using NOT OR Gate

Transistor Implementation of Negated OR 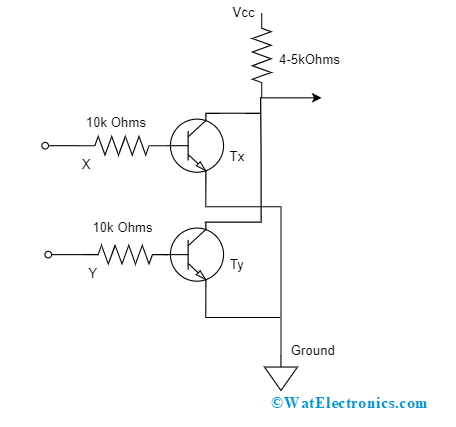 Now, based on the value and combination of inputs applied at the base terminals, the output changes respectively which is as per the NOT OR gate truth table.

To know the exact functionality of the NOR logic gate using a transistor, we need to analyze all four combinations of inputs.

From here, the current reaches the entire circuit, but the emitter end has a connection with the ground which makes a ‘0’ potential difference between the ground and output terminal. Due to this, LED moves into OFF condition thus making the output as logic LOW.

Multiplexers are combinational circuits having multiple data inputs and providing a single output. These are also termed as data n selectors, universal logic circuits, many to one device, and parallel to serial converters. Mux devices are generally implemented in circuits to enhance the amount of data that can be transferred across the network within the specified amount of bandwidth and time. The below picture shows how the NOR logic gate is designed using a mux. 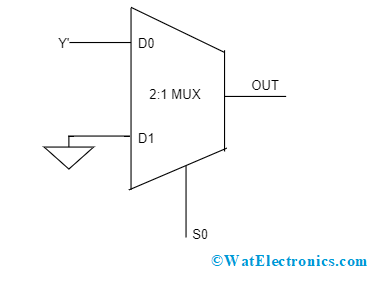 NOT OR Using Multiplexer

DTL Implementation of NOT OR Gate

The implementation of NOR using diode can be termed as Diode Transistor Logic (DTL) where the circuit uses a BJT transistor and general-purpose diodes. The logic behind the operation of this circuit is simple.

The collector and emitter end of the transistor are in parallel with the LED. When the transistor is in ON condition, the power supply bypasses all parts of the circuit through collector-emitter junctions which makes the LED move into an OFF state that is output is logic ‘0’.Below is the circuit diagram of DTL. 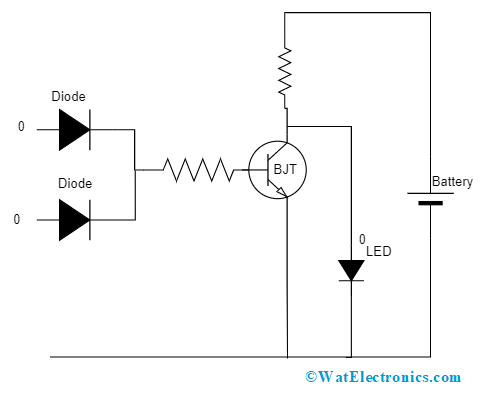 The transistor moves into a conduction state only when either of the inputs is at logic ‘1’. Whereas when both the inputs are logic ‘LOW’, the transistor will stop conducting and so the entire power supply passes through the LED device thus making it ON which means that the output is logic ‘1’.

This section explains the VHDL code implementation for a NOR logic gate:

entity NOR Gate is

architecture NOR1 of NOR Gate is

NOT OR Gate IC

This is a two-input NOR logic gate IC that has 14 pins. The IC consists of 4 independent gates where each gate performs NOR logic gate functionality. These gates work on advanced silicon gate CMOS technology to gain higher functional speeds utilizing minimal power and every gate has buffered outputs. The outputs are directly interfaced to NMOS, TTL, and CMOS logic. This IC has an enhanced range of operating voltage and has wide functional conditions. 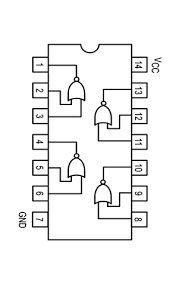 The functional characteristics of 7402 are:

The electrical characteristics are:

The switching characteristics of 7404 are:

The advantages and disadvantages of NOR gate are as follows:

NOT OR Gate Applications

A few of the NOR Gate applications are explained as below:

This is all about an overview of NOR logic gate. This article has given detailed exposure to the NOR logic gate truth table, circuit, design, applications, and advantages. Also, know how CMOS logic NOR are constructed and what are their performance characteristics?