You are here: Home / Basics / What is Amplifier : Circuit Working and Its Applications

An amplifier is a basic circuit that is obtained from the transistors. These devices are designed in such a way that the transistors with the low value of the input signal are converted in terms of the signals which possess high strength. These are most widely used in the concept of long-distance communication and also at the place where the wireless data transmission is used as the media.

Amplifiers are derived from the transistors because they are capable of operating under three regions active, cut-off and saturation. For the purpose of amplification, the focus will be on the active region. The main purpose of these amplifiers is to enhance the strength of the applied input signal without alteration.

Transistor as an Amplifier

Amplifiers are the circuits that are designed to improve the intensity of the signals. The applied input can be of voltage or the current signals as per the requirement. This process of amplification is utilized in radio signals, long-distance communication, etc…

A transistor must be efficient in terms of gain, linearity. It must possess the bandwidth high. If these parameters exist in the transistor it can be used in various applications specifically in the audio amplifiers.

The transistor circuit for the amplification is designed in such a way that the input is always applied at the junction that is forward biased. Similarly, the output can be collected across the reverse-biased junction of the transistor. The reason for considering this condition is that it provides the results of amplification accurately. At the input side, the transistor is provided with the low resistance value because of that reason it can provide the changes in the output value if there is any significant change in the input signal. 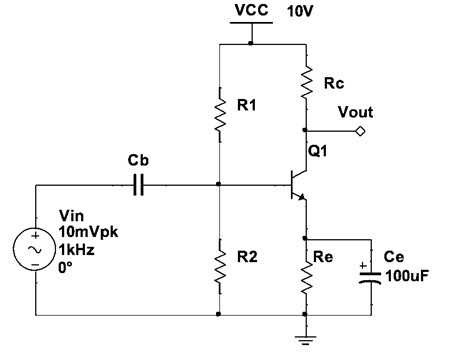 Even the DC voltage can be applied to the circuit. In this way, the low value of the signal is applied at the input because of the internal circuitry design the output signal generated possesses the strength of the output signal as high. Overall the circuit designed here acts as an amplifier. In order to satisfy the parameters and the design considerations generally, the configuration of the common-emitter is utilized in the amplifier applications.

Let us consider a circuit of an amplifier designed with the basic common emitter configuration. In this configuration, the voltage is applied at the base and the emitter terminals. Because the junction present in between them is considered to be in forwarding bias mode. The considered output is taken across the resistor that acts as a load which is connected in between the collector and the base.

As the low resistance is present at the input side in the circuit designed the signals of low strength have been applied at the input and the output generated will be evident with the strength of its signal obtained. In this way, the transistor works as an amplifier. There are various type of amplifiers exists.

They are firstly the Bipolar Junction transistors that classified as a common base, common emitter, and the common collector as its configurations.  Secondly, the classes of the amplifiers classified based on the input applied and the output collected. They are class A, class B, class AB, class C, and class D, etc… lastly the amplifiers designed based on its main factor called efficiency. In order to achieve efficiency it can be designed in the form of stages they are single-stage, multi-stage, etc…

The electronic circuits generally utilize the N-P-N type of BJT. It is considered too be the most frequently used one. Specifically, the common-emitter configuration is chosen because of its gain capacity. The input side can be consists of the resistor connected in such a way that it forms a potential divider circuit. This kind of bias is most frequently used in the amplifiers that are designed with the help of BJT.

Applications of Transistor as an Amplifier

Transistor working as an amplifier has various advantages and applications in the field of electronics and communication. They are
1. It can be used in long-distance communication because the intensity of the signal obtained at the output will be high.
2. In the radio signals amplification, these transistor amplifiers are utilized.
3. The amplifiers play a prominent role in wireless communication.
4. The amplification of the signals using transistors as amplifiers can be utilized in the FM signals broadcasting.
5. In the optical Fiber Communication also these types of amplifiers are utilized.
6. The basic application of this transistor amplifier is as an audio amplifier and this is used in our day to day activities that we come across.

The design can be of various types which design will vary based on its requirement. In this way after analyzing the transistor which can work as the amplifier can you describe other than amplification where you can utilize transistors?