You are here: Home / Communications / What is Transport Layer : Elements & Security

A reference model like OSI is frequently used in mode communication, which states that how the data is communicated between two software applications in the computer. This model comprises 7 layers where each layer has its own security protocols and responsibilities. This was developed in the year 1984 by ISO (International Organization for Standard) and today the model is defined as an architectural approach of inter-computer communications. As every layer in the OSI model is aligned with specific tasks and functionalities, today the article discusses on Transport Layer in the OSI model, its responsibilities, functions, security, and devices.

What is Transport Layer?

The transport layer in a computer network is the fourth layer from the top in the OSI model. The main function of this layer is to acknowledge information receiving from its above layer and divide it into manageable units and transmits the divided information to the Network layer and it even makes sure that the entire divided information reaches correctly to the destination. The layer ensures for efficient transmission of data and in the approach that separates its above layers from unavoidable modifications in the hardware technology. 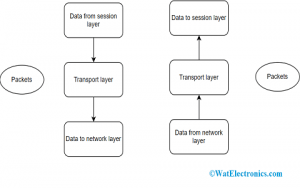 The layer even decided what kind of service to be provided for the Session layer and finally to the network users. The major kind of transport connection is the zero error point-to-point channel which transmits messages in the same order as what they are broadcasted.

The process to Process Delivery

As data link layer need MAC address (containing 48-bits address in then NIC for each host device) of the source to destination hosts for proper frame delivery and network layer need Ip address for correct packets routing, in the same approach transport later need a port number for properly delivering chunks of information to the specific process all among various processes operating on a specific host. The port number is a 16-bit address which is used for the identification of client and server program distinctively. 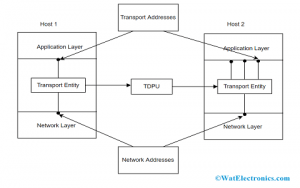 The process of multiplexing allows synchronized usage of various applications through the network that is operating on the host. The transport layer offers the methodology that permits the transmission of packet streams from multiple applications at the same time on a network. The transport acknowledges the received packets from various processes which are differentiated by port numbers and then transmit those to the network layer after the addition of suitable headers.

The transport layer also holds the responsibility of generating an end-to-end connection between various hosts and for this connection it mainly uses user datagram protocol and transmission control protocol. TCP is a reliable and connection-adapted protocol that makes use of handshake protocol in order to create a strong connection between the host devices.

Also, TCP makes sure of safe delivery of information and is implemented in multiple applications. On the other hand, UDP is the deported and inaccurate protocol that makes sure of good data delivery. It is applicable in situations that have little issues regarding an error or flow handling and need to transmit huge information such as video conferencing. It is even employed in multicasting protocols. 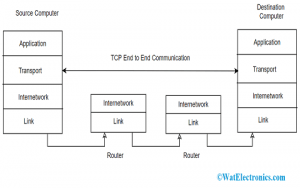 The information that is coming from the application layer might have errors and those are checked by the transport layer through the calculation of checksums and by detection codes. It analyses whether the received information is corrupted or not and through NACK and ACK services, it notifies the sender if the information has arrived or not and ensures data integrity.

This is the condition where multiple sources on a network try to transmit information and the router buffers start out to overflow because of packet loss. Due to this, packets transmitted from the sources get increases and the congestion is more increased. In this scenario, the transport layer shows the mechanism of congestion control in multiple approaches.

TCP also provides the feature of Full Duplex which means that information flow takes place in both directions synchronously. In order to accomplish this service, every TCP needs to possess both transmission and reception buffers so that the segments flow happens in both directions. TCP is considered a connection-adapted protocol.

For instance, process A needs to transmit and accepts the information form process B, then the step to achieve this process are:

The transport layer also offers a flow management approach in between different layers in the IP/TCP model. TCP even avoids data loss because of the quick sender and gradual receiver by the implementation of few flow-controlled methods. It even employs the sliding window protocol method that is achieved by the receiver section by transmitting a window back to the sender by notifying the information size that it can receive.

The information which is produced by the application in one device has to be broadcasted to the suitable application on another device. To establish proper broadcasting, the transport layer provides addressing.

The layer offers a user address that is mentioned either as a port or station. The variable of the port signifies that a specific TS customer of a corresponding station called TSAP (Transport Service access point). Every station holds only one transport entity. The protocols in this layer should be aware of the upper-layer protocols that have communication with it.

Firewall – This is the device that is intended to avoid any kind of unauthorized access either to or from the private network. Few of the operations managed by firewall devices are of packet filtering and also functions as a proxy server.

Gateways – In the domain of computer networks, a gateway is the device that is the component of two network devices that uses various protocols. It is also a protocol converter where it converts one protocol into another one. A router is considered a special type of gateway.

The importance of Transport Layer Securities (TLS) is that they are intended to provide enhanced security at the transport layer. TLS was initially originated from a security protocol which is Secure Service Layer (SSL). It makes sure that no other external parties listen to their messages.

The main advantages of TLS are:

The connection between server and client is done through TCP and assumes that the client is something. The client transmits the below specifications and those are:

The server initially verifies what is the highest version of SSL that is supported by both of them and then selects one cipher suits from one of those and as an option chooses a compression process. Then after this selection, fundamental setup is done and the server provides its certificate.

This has to be endorsed either by the external party of the client or by the client itself. Upon verification of the certificate and being specific that the server is truly the choice that it claims and then a key is exchanged. This might be a public key termed as ‘PreMasterSecret’ or just nothing based on the cipher suite.

Now, both the client and server compute the key to move ahead with symmetric encryption. The handshake is completed and both the hosts can have secured communication. In order to close the connection, TCP connection from both ends gets to know that the connection was not properly closed. The connection should not be compromised through this way merely disrupted. This is how TLS security is operated.