You are here: Home / Electronics / What is a Closed-Loop Control System & Its Working

What is a Closed-Loop Control System?

Closed- Loop control systems are also known as Feedback Controllers. Here, the operation of the controller is monitored and controlled using a feedback loop. The aim is to maintain the value of the process variable the same as that of the setpoint value.

The below figure shows the block diagram of a closed-loop control system. 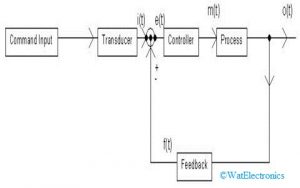 To check whether the generated output is the same as desired output, a part of the signal is given back to the input. This is the feedback signal. When this feedback signal is compared with the reference input signal an error signal is generated. This error signal is applied to the controller. The controller then produces a manipulated control signal that guides the process in eliminating the error present in its output. Hence, the desired output is obtained at the end of the process.

This cycle repeats itself and continuously monitors the process output so that the desired output level is maintained. Hence,closed-loop control systems are considered fully automated systems.

The below figure is used to derive the characteristics equation of the closed-loop control system. 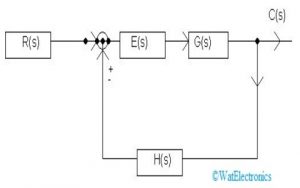 The gain of the system is given as the ratio of its output to the input. Thus, from the above figure,

C(S)/R(S) = G(S)/[1+G(S)H(S)], this is for the Characteristics function of a closed-loop control system with negative feedback

Characteristics equation of a closed-loop control system with positive feedback is given as:

The main aim of the system is to maintain the constant temperature of the water. In this system water is provided with a constant flow to the system, the internal valve is used to generate steam that is mixed with water to maintain the desired temperature of the water. A pressure thermometer is used as feedback for this system.

When a reference input is provided, the valve generates a control signal that indicates the system to generate the required amount of steam. This steam is mixed with the water and the water is moved towards the outlet. The pressure thermometer measures the temperature of the water at the outlet and compares it with the reference input value.

Some of the applications of the closed-loop control system are as follows: