You are here: Home / Communications / What is IEEE 488 Bus or GPIB : Working & Its Applications

During the 1960s, HP developed many different tests and measuring devices like logic analyzers and multimeters. In order to achieve smoother interconnection between controllers and measuring instruments, the HP-IB was introduced (HP Interface Bus). HPIB is the original name for GPIB (General Purpose Interface Bus), whereas later it got many other names. Finally, the Institute of Electrical and Electronics Engineers has provided a specification number to GPIB which is 488 in the year 1978. From then, GPIB was also termed IEEE 488 or IEEE 488 bus. Today, this article helps us in understanding the detailed concept regarding the basics of GPIB, its architecture, working principles, and advantages & disadvantages.

The IEEE 488 (GPIB) bus is an 8-bit parallel multi-master interface bus that is used for short-distance communications. As the bus became the key interface meeting multiple standards, it was termed as General Purpose Interface Bus. Because of its flexibility, the data transmission can take place between any instruments present in the bus having a speed appropriate for the slowest active instrument.

Achieve proper communication between the devices in GPIB requires three components which are:

Talker – This holds the ability to transmit device-dependent information from one device to another device on the bus when it is addressed to talk. On the whole device, only one GPIB instrument can function as an active talker at a time.

Listener – It is responsible to receive device-dependent information from another device present in the bus when it is addressed to listen. On the whole device, more number of GPIB instruments can function as active listeners at a time.

Controller – The name of the controller itself signifies that it is an entity that manages the entire functionality of the bus. The controller is generally a computer that provides the signal to the instruments to execute multiple activities making sure that no issues take place in the bus. When two talker devices try to talk at the same time instant, it leads to data corruption and shows the impact on the entire system.

IEEE 488 bus allows different controllers to share a similar bus whereas only one controller will be active at any specific time.

GPIB bus consists of eight data lines in order to transmit 8 bits of data at a single instance. And command messages work with seven bits out of 8 and the message format is shown below:

As the main functionality of GPIB is to establish interconnection between various instruments and devices, it is recommended to know the features of the IEEE 488 bus. A few of those are:

The IEEE 488 bus architecture, consists of 16 signaling lines that are used to carry information and allow to pass commands between various devices that have connections with the bus. These 16 signals are classified into three groups which are

The data bus acts as a channel for data transmission and passage of commands across the device connected to the GPIB device. The 8 signals are named DIO 1 to DIO 8 which are bidirectional in nature and active low lines. The data transmission using the commands takes place in bit-parallel and byte-serial approaches which correspond that only one data byte can be transmitted at a time. DIO 1 is the LSB bit and DIO 8 is the MSB bit.

The control over data transmission of every byte that happens in the data bus can be achieved through an approach named “three-wired-handshake”. Using this approach, the data transmission happens at the speed level of the slowest listener so that every listener can be able to hear, ensuring data integrity.

The handshake signaling approach is explained below:

The DAV (Data Available) is managed by the talker, and the NRFD (Not Ready For Data) and NDAC (Not Data Accepted) which are wired-OR lines are shared by all the active listeners. All the three DAV, NRFD, and NDAC are active-low signals.

This is a group of 5 lines that controls the data flow all over the GPIB device. The functionality of each line is explained below:

EOI (End/Identify) – In the multi-byte data transfer, this bit signifies the last byte. At the time of the last data byte, the talker sets the EOI pin to TRUE. In order to start a parallel poll sequence, the active controller works along with the ATN line and EOI line.

IFC (Interface Clear) –This line is used only by the system controller. When the IFC line is LOW, all the devices which are placed on the bus are not addressed to listen, talk and even IFC Low makes the bus to be in a service request idle state.

SRQ (Service Request) – This pin transmits an interrupt request to the controller. The request indicates that there may be an issue or the device is ready to transmit thus making the SRQ line TRUE. This states to the controller that the device which has a connection with the bus is requesting a service.

As the controller will not be aware of which device is requesting a service, it creates a poll to find the device that requests the service and then analyzes the request.

Types of Message Transmissions in GPIB

There are mainly three types of message transmissions in the IEEE 488 bus.

Interface Function Transmission – The data flow over GPIB is mainly controlled by the controller through interface function messages which are termed commands. These messages execute the activities of addressing/unaddressing the devices, switching the device modes for local and remote functionality, and initializing the bus.

Device Correspondent Commands – These are either the mnemonic codes or keywords transmitted by the external controller in order to regulate the functionality and setup of the addressed instrument. These commands are distinctive for each instrument. The device correspondent commands will transmit in ASCII pattern having codes/one or more keywords.

These ASCII format messages are then decoded by an internal controller in the device and allow multiple activities to be executed. 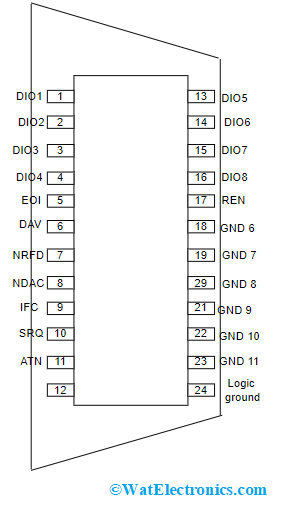 The below table details the pin configuration of the connector.

Difference between GPIB and Ethernet

Advantages and Disadvantages of IEEE 488 Bus

Here are the advantages and disadvantages of the GPIB bus.

A few of the applications of GPIB are:

What you have read so far is about a 20-year-old protocol for connecting instruments and control systems together and even used with PLCs. I hope this article has provided a clear explanation of IEEE 488/GPIB bus architecture, working principle, message formats, applications, and advantages. Know, how IEEE 488 bus can be used as a computer interface?