You are here: Home / Communications / What is Bus Topology : Working & Its Examples

In a computer network, the network topology is the geometric representation of how different devices, nodes are interconnected logically or physically to each other. There are different ways to arrange a computer network where each has pros and cons based on the requirement of your computer. Some network arrangements can provide you high security and connectivity. In a computer network, there are five types of network topologies like mesh, point to point, star, ring, bus, tree, and hybrid. From that, this article discusses an overview of one of the topologies like bus topology.

What is Bus Topology?

A bus topology is used in a LAN (Local Area Network) where different nodes are linked to a particular cable otherwise a single backbone. A coaxial cable/RJ-45 cable is used to connect different devices. In a bus topology, when the cable has any problem then the entire network will not work. For the safety purpose of a network, there may be alternate cables. This is a very simple type of network topology as compared to other topologies because it can be arranged easily. 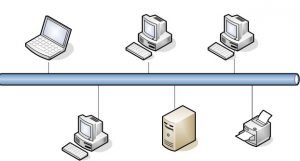 In a computer network, bus topology does not require additional cables throughout the installation as compared to other kinds of topologies. If any node within the network stops working then the remaining nodes will keep working. So, it is very convenient to include the latest nodes toward the network without delaying other types of nodes.

So this topology is applicable for small distance networking. It needs fewer cables as compared to a star topology. If extra devices are added to this topology then the data transfer rate will be slow down. On both faces of the cable, terminators are required. In this network topology, if any error takes place, it is very difficult to detect and solve the issue.

In a bus topology, a Terminator is one kind of device, used to connect one end of a cable or bus to absorb signals. By using these devices, signal reflection can be avoided, which can generate interference to cause loss of signal. Most of the communication systems like computer buses and networks need some type of termination at the data lane ends, even though this is frequently provided inside through the devices at the data lane ends.

A node is a computer network is a server or client or any other network device. A node plays multiple roles where the decision of role mainly depends on the responsibility and activity. The common roles of this node are client, server, and intermediate node.

A bus topology is one kind of network topology. This kind of topology includes a single cable at each end with the terminator. This single cable is very useful in connecting all the available nodes. In the network, there is no limit to connect the nodes to the network but these nodes will affect the network performance.

One of the nodes in this topology works like the server so that data can be transmitted from one end to the other in a particular way. Once the data arrives at the endpoint, the terminator will eliminate the data from the line.

In this topology, one major cable works as the backbone for the whole network because this topology holds the transmitted data through the cable. When this data arrives at every node, then the node will verify the address of the destination to notice if it is equal to their address or not.

If the destination address doesn’t equal, then the node will not work more. However, if the destination address of the node equals the address enclosed within the data afterward they process the data. In this topology, the backbone cable mainly depends on the network card which is used at every computer. The connection of this card can be done through a coaxial cable or network cable.

For bus topologies, the most frequently used common access technique is Carrier Sense Multiple Access which is also called CSMA. The main function of CSMA is to control the flow of data so that maintenance of data integrity is easy that is, there is no loss of packets. Once two nodes transmit the messages concurrently, and then there are two different methods for handling the issues that occur like CSMA CD & CSMA CA.

CSMA CD: CSMA CD stands for Carrier Sense Multiple Access Collision detection. It is one kind of access method mainly used to notice the collision. Once the collision is noticed, then the sender will not transmit the data. So, it works on after the recovery of collision.

The examples of bus topology include the following.

The advantages of bus topology include the following.

The disadvantages of bus topology include the following.

Please refer to this link to know more about Network Topology MCQs.