What is an Open Loop Control System?

Generally, an error may occur in the system during the process of the control signal. But there is no chance to adjust the given input signal with the desired output signal when there is a difference between them. Electric hand dryer, automatic washing machine, toaster, traffic light control system, tea maker, clothes dryer with time, stereo system, remote controls, room heaters, automatic doors are some of the examples of Open Loop control systems.

The Open Loop control system is easy, economical, and fast. The accuracy of the system is less because the desired output will not be equal to the given input signal. It is also known as a non-linear control system.

The control action of the clothes dryer is done by an operator manually. When the operator sets the timer for 20 minutes to dry the wet clothes, the timer will stop the control action dryer even though the clothes are wet. That means the dryer stops working after 20minutes because of no feedback path. Hence, the output obtained is not compared with the reference input. The timer of the clothes dryer acts as a controller unit. 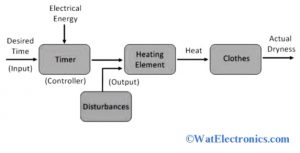 When the timer of the washing machine is set by an operator manually, it stops working after the time even if the required cleanliness is not obtained. Because of no feedback signal, the machine cannot recognize that the desired output is not obtained.

What is Closed-Loop Control System? 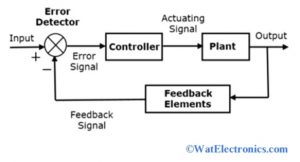 From the above diagram, the feedback path is provided from the output and it is applied back to the input to compare and adjust. An error signal produced by an error detector is the difference between a feedback signal and an input signal. Here the feedback signal is an overall output of the system, which is taken as input to get the desired output and reduce the error. This feedback signal might be positive or negative.

When an error signal generated by an error detector is fed to a controller, an actuating signal or control signal is produced. The output of the controller is processed in the plant or processor to get the desired output. The feedback path of the system will help to compare and adjust the output as required. Automatic electric iron, servo voltage stabilizer, traffic light control system using sensors, water level controller, Radars, air conditioners, the cooling system in the car, are some of the examples of Closed-loop control systems.

The Closed Loop control system is more accurate, reliable, and costlier due to the feedback path (feedback element).

The block diagram of an air conditioner using Closed Loop control system technology is shown below. The working of an AC is based on room temperature.

The water input is controlled by the water level of the reservoir or water tank.