You are here: Home / Basics / Decimal to Octal and Octal to Decimal Conversion

The Octal Numbering system is another number systems which is used in the digial world. In the electronics based systems the processors and the devices prefer Binary format.  The decimal system is the standard numbering format which is understandable by all humans but the binary number is difficult for humans to remember or read. Hence Octal and hexadecimal systems came into existence . These are used in processors/machines. It is because, a number in digital system when represented with a higher base value could occupy less memory space.  Apart from that, higher base value number systems are easy to refer address locations in processors.  The normally used higher base value numbering systems are hexa decimal and octal number system.

In this octal system, the values present are from 0 to 7. As there are eight digits in this system, the radix of it is eight. This system is known as the ‘Base 8 System’. There are various direct and indirect methods available to convert decimal system to Octal . In the method called indirect, the decimal format can be converted in the form of binary using decimal to binary conversion. Once it is converted the digits are grouped into three bits and the octal values are extracted.  The direct method of conversion from digital to Octal can be seen below.

Decimal and Octal Conversion follows the method of division. By dividing the decimal with eight one can obtain the octal value. The value is divided by eight because of the radix representation of octal which is eight.

The steps followed to convert decimal into octal are

Let us discuss the above conversion in detail followed by an example.

Based on these steps the conversion of decimal to octal is performed. Even though online programming tools and converters are available for the conversion. Its better to have a understanding on how it ca be done manually or how these converters work.

The conversion of the Decimal values into octal is possible by the method of the division until it reaches its quotient to 0. The obtained last remainder is treated as MSD. The conversion of a mixed decimal number is simple by converting both the integer and the fraction parts separately. The fraction part of it can be converted by multiplication of the digit 8 till the product value reaches 0 or it reaches the required value of accuracy. In this case, the first integer is treated as MSD.

As the decimal to octal conversion is discussed let us deal with the reverse process of it.

The steps involved in this conversion are as follows:

If there are mixed octal numbers. In such cases, the part of integers and the part of fractions are separately converted. The integers must be multiplied with the positional weight of 8. The fraction part must be divided into 8. It is just the replicate process of decimal to octal conversion.

Convert 572 value of octal into Decimal

Convert 57.1 value of octal into decimal 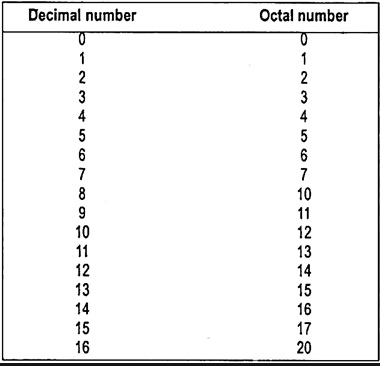 Hence the conversion of octal number into decimal and vice versa is very simple.  Even there are various  programs in different languages like C, Java,python, php that convert one form of code into another format.  There are also encoding and the decoding circuits which are used in circuits for hardcore conversions.  The Encoders are placed at the inputs of the circuits. However, the conversion must be handled with care while the mixed decimals are provided. Can you convert the value of octal 4057.07 into a decimal?