Likewise in the machine to machine communication or man to machine communication where the information has to be fed in an understandsable format to the computers or any devices that consist of processors and microcontrollers Binary number systems is used. It has it origin in different countries like India, China, Egypt etc.  Binary numbering system can be easily implemented in digital circuity using logic gates and so it is machine understandable .

Even though there is availability of  Binary to Decimal Converters there are few steps involved if it is to be converted manually. Let us discuss the steps involved behind this with an example.

Example of Binary to Decimal Conversion

Hence the final value of the given binary sequence in terms of the decimal is that 91. It is represented as 91 with base 10.

The other method for converting binary values into decimal is by using a method called ‘Doubling Method’.

The method starts from the position left. The very first digit is considered a number with zero value. This number is doubled by multiplying it with 2 and adds the binary value that is present in that position. It is a chained process. The final value is dependent on the result of the previous value.

Let us consider the same example we have used above.

By using this technique one can convert any base or radix value to decimals.

The process stops when the quotient is obtained as 1. Then the binary value obtained is written as 10010110. The values are written from the final reminder to the reminder obtained in the first step. This can even be verified by using the above binary to decimal process. One important point to be noted from the above division is that when the quotient obtained is odd the reminder obtained as 1. Otherwise, the obtained reminder is 0.  There are other methods of conversions. But the division method is simple to understand and analyze.

The below table consists of the values of decimals and the way they are represented in binary. By remembering these table values or looking at the table one can also do the conversions easily. 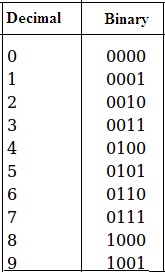 In the digital systems where the chips are to be mounted and the conversion should be done automatically the ICs are designed which are known as the encoder. The purpose is to convert the one numbering system format into another based on the requirements.

Generally, the most utilized numbering format is decimal. This is the human-understandable system. But the other formats are used based on requirements in the digital circuits or systems.  Can you convert 250 Decimal numbers into Binary?