You are here: Home / Communications / What is Backpropagation Neural Network & Its Working

The concept of the backpropagation neural network was introduced in the 1960s and later it was published by David Rumelhart, Ronald Williams, and Geoffrey Hinton in the famous 1986 paper. They explained various neural networks and concluded that network training is done through backpropagation.

What is an Artificial Neural Network?

The collection of connected sections is known as a neural network. Each connection is associated with a specific weight. This type of network helps in constructing predictive models based on large data sets. The working of this system is similar to the human nervous system, which can help in recognition and understanding of images, learns like a human, synthesizes speech, and many others. 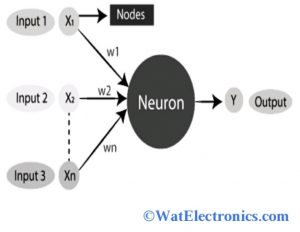 An artificial neural network is used in the field of artificial intelligence, where it copies the network of neurons and builds up a human brain. So that computers can understand things and make decisions like a human. It is designed by programming computers, which act like interconnected brain cells.

The architecture of the artificial neural network shown above consists of 3 layers. They are the input layer, hidden layer, and output layer.

Hidden Layer: This layer is located between the input layer and output layer. It is used to perform calculations to determine hidden features and patterns. It computes the error obtained in the calculated output.

Output Layer: A series of transformations are done in the input layer by using a hidden layer and the final desired output is obtained in the output layer.

The term backpropagation is referred to as backward propagation of errors. It is the heart of neural network training. In this concept, fine-tuning of weights of a neural network is based on the error rate determined in the previous iteration or run. An error rate is reduced by proper tuning of weights and the model becomes more reliable by increasing its generalization.

It is a standard form of artificial network training, which helps to calculate gradient loss function with respect to all weights in the network. The backpropagation algorithm is used to train a neural network more effectively through a chain rule method. That means, after each forward, the backpropagation executes backward pass through a network by adjusting the parameters of the model.

Each layer works independently in its way to get the desired output and the scenarios correspond to our conditions. 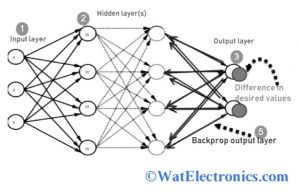 The working of backpropagation can be explained from the figure shown below.

The difference between the actual output and the desired output is used to calculate errors obtained in the result.

Why We Need Backpropagation?

The backpropagation technology helps to adjust the weights of the network connections to minimize the difference between the actual output and the desired output of the net, which is calculated as a loss function.

The backpropagation neural network is classified into two types. They are,

In this type of backpropagation, the static output is generated due to the mapping of static input. It is used to resolve static classification problems like optical character recognition.

The Recurrent Propagation is directed forward or conducted until a certain determined value or threshold value is reached. After the certain value, the error is evaluated and propagated backward.

The advantages of backpropagation neural networks are given below,

The disadvantages of backpropagation neural networks are given below,

Please refer to this link to know more about Bridge in Computer Network.