You are here: Home / Communications / What is a Routing Algorithm & Its Types

What is a Routing Algorithm?

A set of operations are performed by the network layer, which regulates the traffic of internet usage effectively and efficiently. This is known as a routing algorithm in computer networks. It is used to determine the best path or route mathematically.

In communication networks, there will be multiple paths to transfer the data from source to destination. One path should be preferred over others to reach the destination. The process of selecting the path or showing the path is known as routing. Routers are the network devices used to select the route by some software programming. In computer networks, it contains the information regarding the selected best routes, through which data is to be transferred from source to destination.

For example, to compute the best path, this algorithm uses different methods. One of the methods is the distance vector method. In this type of routing, all the possible routes at every node (point) are computed in the form of a graph that gives the cost of travel to the immediate node/neighbor. The total routing information will be collected to create a routing table (distance table), which is used to calculate the best route from one node to another node. An example of the routing algorithm is shown below figure. 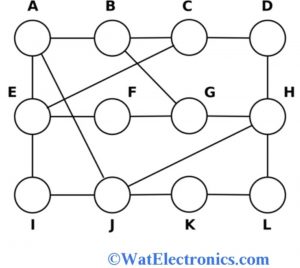 It is a routing protocol used to show the best route, through which data packets are transmitted to the destination. It helps to transfer the data to the destination effectively. There are 2 types of routing algorithms in computer networks. They are,

It is also known as dynamic routing. The selection of routes and change of routing decisions depends on the network traffic and topology used. It calculates and optimizes parameters like hop count, the distance of the path to reach the destination, and approximate transit time. It requires dynamic data like network topology, load, and delays to select the best route.

It is a routing algorithm, which takes the information of the routing from the local information other than the information from the neighbor nodes. Routing decisions are done by using only the local information that it has and it doesn’t gather any data from other nodes. The node will not have any information regarding the status of the link. The main disadvantage of an isolated routing algorithm is, the data packets are transferred through a narrow/congested network, which results in a delay to reach the destination. Examples are hot potato routing and backward learning.

This type of algorithm is also known as global routing or link-state routing. With the help of complete information of the network topology, it calculates and selects the best least-cost route to transfer the data packets between the sender/source and receiver/destination. The connection between the nodes and input as link cost is achieved before the calculation of routes.

The centralized node contains all the data of the network topology to make correct routings and if there is any failure, then the total network goes down. The main advantage is, only one node will have the information about the total network.

It is also referred to as static routing. In this type of algorithm, the routing of the data packets doesn’t depend on the network topology and the traffic of the network. The routers store the information of the routing when the network gets booted. The best route will be decided in advance and there will be no change.

In this type, all the outgoing links receive every incoming data packet except the one, from which the packet has generated. The duplicate packets might be generated at the node due to the loop links. This drawback can be resolved by using sequential numbers, spanning tree, and hop count.