You are here: Home / Electronics / What is Enhancement MOSFET & Its Operation

What is Enhancement MOSFET?

MOSFETs are usually classified into two types. They are Enhancement and the Depletion MOSFETs. The MOSFET that is basically in OFF condition which requires a certain amount of voltage at the terminal gate to turn ON  is referred to as Enhancement MOSFET.

Due to the application of gate voltage the channel among the terminal of drain and source gets less resistive. If the applied voltage at the gate increases then the current flow from the terminals drain to the source increases until and unless it reaches its maximum point.   The behavior of this type of MOSFET resembles the behavior of bipolar junction transistor (BJT).

The Schematic symbol of Enhancement MOSFETs of both p-channel and n-channel MOSFETs are:

The steps involved in the construction of Enhancement MOSFET are: 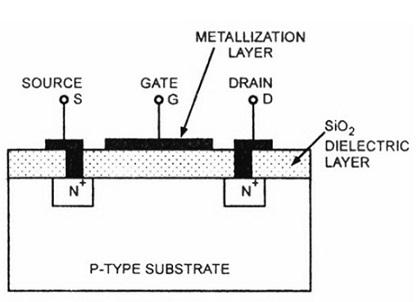 Operation of an Enhancement MOSFET

The operation of the Enhancement MOSFET are

Let us consider a situation when the positive amount of the voltage applied at the Drain- Source by keeping the gate voltage as zero.

Hence from the above points, it can be concluded that the channel conduction is enhanced based on the positive potential of the gate terminal. 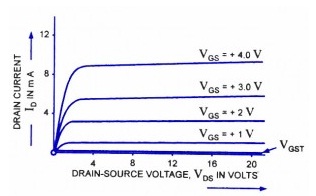 The Enhancement type MOSFET is well suited in the application areas where power devices are used. To increase the conductivity the amount of applied gate potential must also be increased. Because of the low resistance required to turn ON the device and high resistance offered while turning it OFF these devices are preferred for switching applications. After knowing the applications of Enhancement MOSFETs can you describe where the depletion-mode MOSFET is preferred?