You are here: Home / Electronics / What is Dielectric Material : Types, Properties & Applications

The materials used in the electronic industry are classified based on the conduction of electricity. These are of three types, they are conductors, semiconductors, and Insulators.  The purpose of dielectrics is to prevent the conduction of electricity.  These resemble the functionality of insulators. The very famous application of dielectric material is observed in the capacitors. Because the conducting plates are separated by a non-conducting media known as insulating material.  Based on the type of insulating material chosen various types of capacitors are classified.

What is Dielectric Material?

Definition:  A Dielectric is a material which is poor in terms of conducting electricity. But it is an efficient supporter of Electrostatic Field. If the current flow between the charged poles of the opposite type is maintained at a minimum without any interruption for the electrostatic flux lines then those electrostatic fields are capable of storing energy. This phenomenon is practically useful for storing energy in devices.  Even in the construction of Radio Frequency transmission lines, the dielectric materials are used. 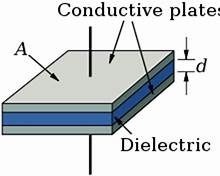 Generally, the dielectrics are classified into two types.

The dielectrics which are placed externally in the active electric field so that it can accept the electric flow from it. These are known as active dielectrics.  These are of ease regards to storing the energy.

The restriction for the flow of charge through the dielectric is termed as a passive dielectric.

Dielectric materials are further classified based on the state of the material is into three types. They are solids, liquids, and gases. Solid dielectrics are paper, mica, ceramic and glass, etc… Liquid dielectrics are oil used in transformer, distilled water, etc… Gase dielectrics are metal oxides, nitrogen, helium,  etc…

The possibility of the coincidence of positive and the negative type of molecules is maintained to be zero. It is due to the asymmetric shape of the molecule. If the electric field is applied externally then in such case the charges molecules assemble in a similar direction of the electric field.

In this type, both the positive and negative charges coincide with each other. There is no condition of a permanent dipole moment in these molecules.

The Dielectric Material Examples are

The properties of dielectrics make us select the best suitable one based on its requirement. Some of the properties are:

Due to the application of the higher levels of electric fields, the dielectric tends to conduct. Hence this condition is referred to as Dielectric breakdown.  This is one of the important properties of the materials because this condition may lead to the damage of dielectrics. Dielectric Loss- The conduction of wastage of supply because o absorbent off it by dielectric material is known as dielectric loss. This type of situation arises when the supply is of Ac type. Dielectric Constant

To determine how much the amount of the electric flux can a material hold in it is possible by using the factor called dielectric constant.

There are various applications for such types of materials. Some of them are as follows:

1). What is Dielectric Polarization?

2). Which Material is used as Dielectric?

The materials which are known for poor conductors of electricity are used as dielectrics. Plastic, Mica, Ceramic, Dry air, Distilled water, etc… are some of the examples of dielectrics.

3). Why Insulators are called Dielectric?

Due to the property of poor conduction insulators are referred to as dielectrics.

4). Which material has the highest dielectric strength?

The vacuum is the perfect example of the highest dielectric strength. The reason behind it is due to the absence off any type of material to incur breakdown.

5). What is the unit of dielectric strength?

In the SI system, the units of dielectric strength are to be measured volts/meter.

Dielectric materials are subjected to premature aging due to the excessive amount of heat and the overvoltage applied. It also gets influenced because of other materials resulting in the failure of the dielectric. Can you describe what makes the dielectric to incur the condition of breakdown?