You are here: Home / Basics / What is an Instrumentation Amplifier : Circuit and Its Working

Instrumentation Amplifier is the basic amplifier and the designing of this can be done based on the requirement in different applications. For example, measurement of temperature or it might be humidity for the industrial applications. These measurements must be converted in terms of signals that are in electrical form. Finally, this signal must be provided as the input to this amplifier so that the amplification of the signals can be obtained. The main intention of this amplifier is to eliminate the noise from the circuit. The basic requirements that must be considered while designing of these amplifiers are that it must possess the resistance at the input must be high, the Common-Mode Rejection Ratio (CMRR) must be maintained high with slew rate at high levels but the resistance at output must be low for matching of impedance.

What is the Instrumentation Amplifier?

Definition: A basic amplifier that is designed for amplifying the low-level output signals. It is designed in such a way that while amplification of the signal, it eliminates the noise and the interference. This type of amplifier can be defined as an Instrumentation amplifier.

The important points to be noted in this amplifier are listed as follows:

In this way, the instrumentation amplifier possesses certain important characteristics in comparison to the other amplifiers.

The design of this instrumentation amplifier can be obtained with the basic op-amps. It utilizes ‘three’ op-amps for obtaining instrumentation amplifier configuration. The design can be implemented with the two op-amps but with the ‘three’ op-amps configuration, it is the most widely preferred one. At the input, it consists of two op-amps and at the output, one op-amp is considered.

As discussed earlier, it consists of two non-inverting amplifiers along with a differential amplifier. It consists of resistors with the respective terminals. The intention is to design an amplifier with a high CMRR value along with the maximum undistorted value of signals. 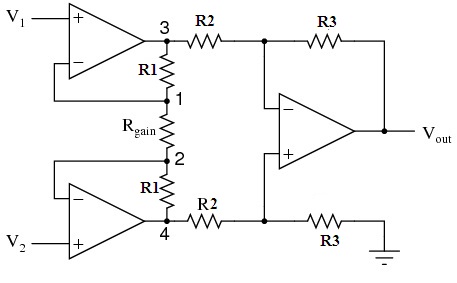 In this way, the instrumentation amplifier works.

Let us see the input stage that is present in the instrumentation amplifier. 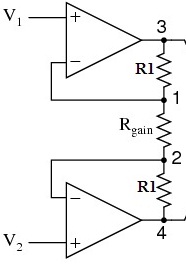 From the input stage, it is clear that due to the concept of virtual nodes, the voltage at node 1 is V 1. Similarly, the voltage at the node in the above circuit is V2. Initially, the current through the op-amps considered zero. Hence no current can flow through the resistors.

As considered there is no current flowing through resistors at the input.  The equations at node 1 and 2 are

On equating both the current equations

The output equation of the differential amplifier can be given as

On substituting the above equation in (3)

In this way, this output voltage equation of this amplifier can be derived.

The instrumentation amplifier applications involve when the environment possesses high noise. The requirement of this amplifier is to achieve high gain. The applications of these amplifiers are as follows