You are here: Home / Electronics / What is an Inductive Transducer : Working & Its Applications

What is an Inductive Transducer?

Definition: A transducer that works on the principle of electromagnetic induction or transduction mechanism is called an inductive transducer. A self-inductance or mutual inductance is varied to measure required physical quantities like displacement (rotary or linear), force, pressure, velocity, torque, acceleration, etc. These physical quantities are noted as measurands. Linear Variable Differential Transducer (LVDT) is an example of an inductive transducer. Using LVDT, displacement is measured in terms of the voltage induced in the winding by moving the core in one direction.

Types of the Inductive Transducer

In this type of transducer, a single coil is used to measure the required parameter. The change in displacement changes the permeability of the flux produced in the circuit results in a change in the inductance of the coil and the output. The output can be calibrated in terms of the measurand, which is to be measured. The circuit of a simple inductance type is shown below. Single inductance type is again divided into two types. 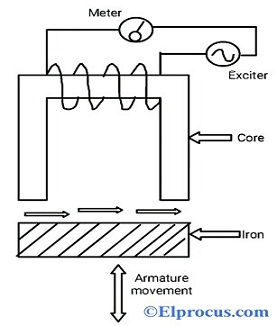 When the armature of the circuit is moved, the air gap between the magnetic materials and the permeability of the flux produced in the circuit changes. This results in a change of the inductance in the circuit. This type is used mainly in counting the no.of objects. The circuit of a single-coil inductance type is shown below.

The magnetic core can be moved inside the hallow material, which has a coil wound around the hallow magnetic material The output is proportional to the input and it can be calibrated in terms of the measurand. The air gap decides the change in the magnetic field of the coils and the flux linkage. 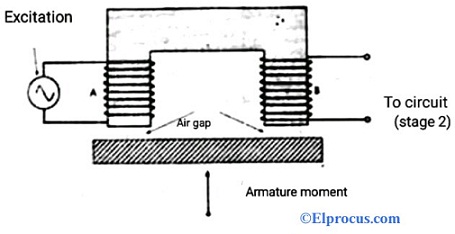 Consider the self-inductance of the coil be,

The expression for the reluctance of the coil is,

‘A’ represents a cross-section area of the coil

‘l’ represents the length of the coil

From the above equations, we can observe that self-inductance can be varied or changed by changing the no.of turns, or geometric form factor or permeability of the coil.

The displacement can be measured directly in terms of inductance by changing any of the above parameters (turns, form factor, permeability). We can also calibrate the instrument against measurand.

Inductive transducers also on the principle of mutual inductance of multiple coils.

We consider the two coils, which have self-inductance L1 and L2

The mutual inductance of the coils is given by,

Where ‘K’ represents the coefficient of coupling.

Hence, the mutual inductance can be changed by varying the self-inductance of the individual coils or by changing the coefficient of coupling. The factor K depends on the distance and orientation of the coils.

To measure the displacement, one coil is fixed and the other coil is connected to a movable object. As the object moves, the factor K changes, which results in a change in mutual inductance in the coils. This change can be calibrated in terms of displacement for an instrument.

The advantages of the inductive transducer include the following.

The disadvantages of the inductive transducer include the following.

Applications of the Inductive Transducer

Inductive transducers are used in,