What is an Intrinsic Semiconductor?

The Intrinsic semiconductor can be defined as chemically pure material without any doping or impurity added to it. The most commonly known intrinsic or pure semiconductors available are Silicon (Si) and Germanium (Ge). The behavior of the semiconductor on applying a certain voltage is dependent on its atomic structure. The outermost shell of both Silicon and Germanium have four electrons each. To stabilize each other nearby atoms form covalent bonds based on the sharing of valence electrons. This bonding in the crystal lattice structure of Silicon is illustrated in figure 1. Here it can be seen that the valence electrons of two Si atom pair together to form a Covalent Bond.

At all the covalent bonds are stable and no carriers are available for conduction. Here the intrinsic semiconductor behaves as an insulator or non-conductor. Now if the ambient temperature comes close to the room temperature of the covalent bonds start breaking. Thus the electrons from the valence shell are released to take part in conduction. As more number of carriers are released for conduction the semiconductor starts behaving as a conducting material. The energy band diagram given below explains this transition of carriers from the valence band to the conduction band.

The Energy band diagram shown in figure 2(a) depicts two levels, Conduction Band and Valence Band. The space between the two bands is called the forbidden gap 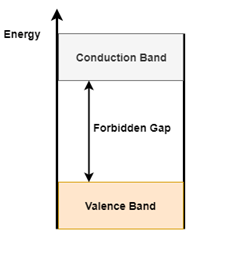 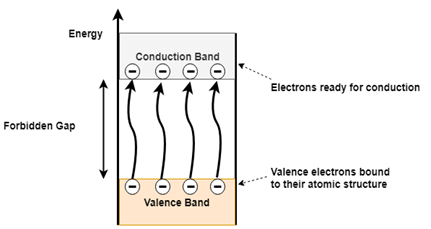 Figure 2(b). Conduction and Valence band electrons in a semiconductor

What is an Extrinsic Semiconductor?

The N-type semiconductors are doped with pentavalent impurities. The pentavalent elements are called so as they have 5 electrons in their valence shell. The examples of pentavalent impurity are Phosphorus (P), Arsenic (As), Antimony (Sb). As depicted in figure 3, the dopant atom establishes covalent bonds by sharing four of its valence electrons with four neighboring silicon atoms. The fifth electron remains loosely bound to the nucleus of the dopant atom. Very less ionization energy is required to set free the fifth electron so that it leaves valence band and enters the conduction band. The pentavalent impurity imparts one extra electron to the lattice structure and hence it is called as the Donor impurity.

P-type semiconductors are doped with the trivalent semiconductor. The trivalent impurities have 3 electrons in their valence shell. The examples of trivalent impurities include Boron (B), Gallium (G), Indium (In), Aluminium (Al). As depicted in figure 4, the dopant atom establishes covalent bonds with only three neighboring silicon atoms and a hole or vacancy is generated in the bond with the fourth silicon atom. The hole acts as a positive carrier or space for the electron to occupy. Thus the trivalent impurity has imparted a positive vacancy or hole which can readily accept electrons and hence it is called an Acceptor impurity.

Intrinsic carrier concentration can be given as:

The expression for the conductivity of an intrinsic semiconductor is given expressed as: