You are here: Home / Communications / What is an Attenuator : Design, Types & Its Applications

Electricity, communication, entertainment, utility resources (gas), etc. everything is required to be transmitted from one point to another. For transmitting these, there are different type of technologies and transmitting techniques. Electrical power generated at one place is transmitted to consumer point using transmission lines along with required substations. For transmitting power from one point to another point, amplifiers are used to increase the power of signal and are called as amplification. Similarly, while transmitting signals over long distances the power of signal may gradually reduces this is termed as attenuation. In this article, we will discuss in detail about what is an attenuator, design of attenuator, different type of attenuators, and attenuator applications.

Definition: Every signal that includes electrical, telecommunication, entertainment signal (television), etc.should be transmitted from one place to another place through a medium.As the distance of signal travelled increases the strength of signal decreases and it will be difficult for a lot of tasks. But, attenuation, phenomenon of gradual loss of strength of signal over distance is still useful in many tasks. Attenuators are simple passive two-port electronic devices that are used for attenuation, to reduce strength of signals without causing disturbance to its waveform. 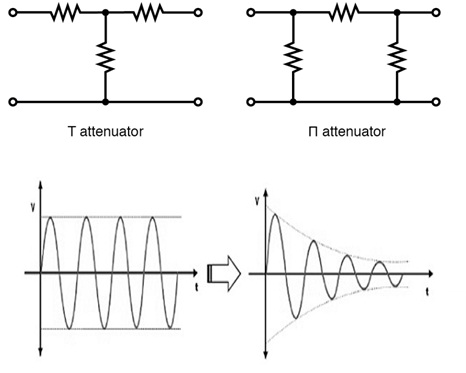 Attenuator is a simple passive two-port electronic circuit as it is completely built using passive components, resistors. Attenuator is designed by positioning resistors to form a voltage divider network. Attenuator design can be changed based on various factors that include balanced, unbalanced and unidirectional, bidirectional.

Simple designs of attenuator will be as shown in the below figures: 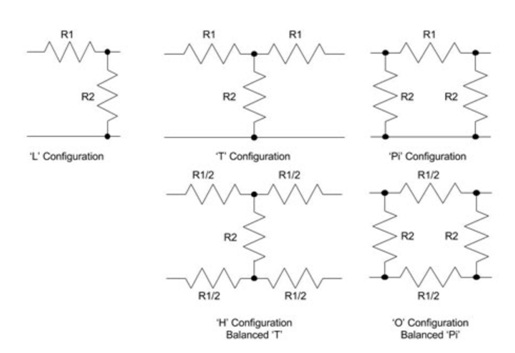 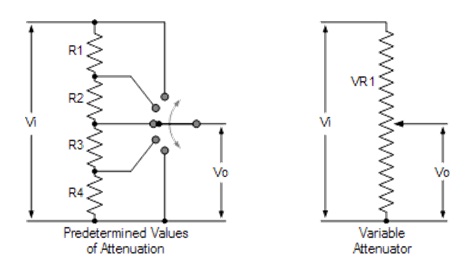 There are many other attenuators that include radio frequency attenuators which typically have coaxial structure with accuracy, low SWR, repeatability as major characteristics; and audio attenuators which is a line-level attenuator used for reducing output volume of speaker.

In the communication systems both the digital and analog signals will be transmitted from one point to another. If signals are transmitted over long distances then there will be some reduction in the strength of signals which is termed as attenuation. Similarly, in the computer networking when data signals or communication signals are transmitted over a long distance then there will be phenomena of attenuation. This is because of range and interference.

There are so manyattenuator applications that we can observe in our daily life and a few of them are listed below:

Thus, this is all about an overview of attenuator like its defitinition, design, attenuation in networking, different types and their applications. You can find out more information about attenuators and its applications by posting your queries in the comments section below. Here is a question for you, what is the function of an attenuator?