RC coupled amplifier is a basic type of amplifier with the various stages present in it. In other words, if we describe RC coupled amplifier we can say that an amplifier that consists of resistors and capacitors which acts a voltage divides and couplers to form multiple/single stage for better amplification. These are the basic circuits that are present in the various types of electronic equipment especially in RF signal or other communication devices as it helps in improving the signal strength through amplification.

What is an RC Coupled Amplifier?

An amplifier with the multiple stages based on the necessary levels of amplification can be defined as an RC coupled amplifier. It can be connected in any transistor configurations based on the efficiency of the system. It is widely used in audio and video communication devices.

The RC coupled Amplifier circuit may consists of various types of transistor configurations connected with the resistors and the capacitors. The configurations can be of the common emitter, common collector or the common base.  In this article, we are discussing a single stage and two stages RC coupled amplifiers.

Single-stage RC coupled amplifier can be termed as a preamplification circuit. Because these circuits are designed to improve the strength of the weak signals for the further amplification process. 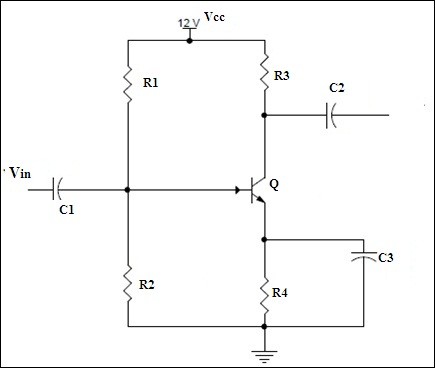 This type of amplifier in the single-stage consists of the resistors R1, R2 and the capacitor. Here the capacitor is utilized so that it can provide the smoothing effect to the signal. It is capable of preventing the DC signals to enter and allow the AC one’s. The resistors R1 and the R2 that is connected at the input side to see to  that the proper biasing voltage reaches the transistor so that the amplification process starts.

Bandwidth can be considered to be the major factor during the amplification of the signals. This can even influence the gain factor. When the curve or the graph is plotted in between the values of the gain and the frequency of the amplifier the resultant curve obtained is known as the frequency response of that particular amplifier. The bandwidth is the difference between the high and low frequency in which the gain remains at its higher value. It could be seen in the below graph that at a lower frequency the gain is low because the reactance of the capacitor is low at lower frequency and similarly at higher frequency the capacitor CE acts a short cirucuit an so again the gain is low. 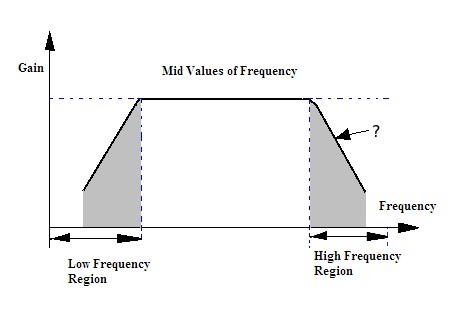 This experiment of the RC coupled amplifier can be performed with the basic resistors and the capacitors with the transistor circuit. So let us discuss the experiment in detail.

Aim:  the purpose of the experiment is to obtain the frequency response and the gain of voltage for the RC coupled amplifier.

The apparatus required for the experiment is as follows:

The experiment performed here is consists of a two-stage RC coupled amplifier. This is very efficient in terms of gain. The output of the first stage is coupled to the second stage as input through the capacitor. The capacitor is also known for blocking the DC signals and providing the smoothing effect to the signals obtained at the output.

As the gain obtained at the two stages will be different this gain values obtained are plotted on the curve with the frequency values. The final gain will be calculated with the product of the individual gains obtained at each stage. The curve obtained from this is known as the frequency response of the amplifier.

The observations of the output voltage & voltage gain for applied frequency can be done by using the above experiment and note down the values in the tabular form.

In this way, the gain value of the voltage and the frequency response of the RC coupled amplifier is calculated.

The applications of the RC coupled amplifier are as follows:

In this way the these are proven to be very advantageous because of its low cost and the frequency response obtained. The presence of the components called resistor and the capacitors in this circuit makes it of low cost. This RC coupled amplifer can be made a multistaged one. For an even staged amplifier the output would be in phase with the input but for a odd stage amplifier like 3 or 5 the output would be in phase shift with the input. But as the circuit becomes older day by day it tends to get easily affected by the noise an so there would a loss in the quality of the signal. However, it is very advantageous in terms of the amplification of audio signals. But other than this can you tell what the major drawback of this amplifier is?